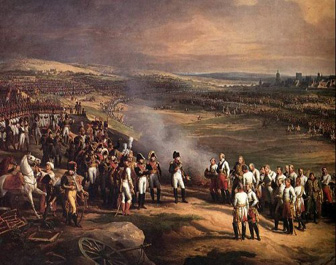 Less of a battle and more of a strategic envelopment, the events of Ulm generally refer to Napoleon's strategic maneuver to surround Ulm and the subsequent surrender of an Austrian army. While numerous skirmishes and small battles played out with these events, no large scale battle occurred as the Austrians realized the hopelessness of their situation.

Napoleon had massed the majority of La Grande Armée on the northern coast of France in preparation of an invasion of England. When he learned of Austria and Russia joining Britain in the Third Coalition and preparing to invade France, he changed his plans and issued orders for his army corps to march to the Rhine.

On the opposing side, the Austrian commanders were convinced that Italy would become the more prominent theater of war. An army of forty to fifty thousand soldiers was designated for the the Rhine theater, with General Mack and Archduke Ferdinand placed in charge. Expecting the Bavarians to join their forces, the Austrian army marched into Bavaria without receiving permission or reaching an agreement. The Elector of Bavaria, Maximilian Joseph, instead secretly allied with France and ordered his troops to fall back and await their French allies. Once he realized the Bavarians would not support him, General Mack decided to take up a position centered around Ulm, intent on defending the Black Forest and awaiting the arrival of the Russian army.


Meanwhile, Napoleon had no intention of letting his enemies unite, and quickly moved his army of 200,000 to crush General Mack's force. Using Marshal Murat's cavalry and natural terrain to screen his army's movement, Napoleon maneuvered his troops around Mack's position without the Austrians realizing it. By the time the Austrians realized that the French army had them cut off and surrounded, it was too late. Multiple attempts to break out failed against strong French resistance and the units that did escape became scattered and unable to communicate. A detachment of 6000 cavalry under Archduke Ferdinand made a run for safety, barely eluding the French net, only to be caught and forced to surrender within a few weeks.

With the French army concentrating at Ulm, and the Austrians badly outnumbered, Napoleon demanded the surrender of Ulm. General Mack attempted to negotiate, not considering it hopeless if the Russians arrived soon, but the French knew the Russian army was too far away. An agreement was made where Mack would surrender if no reinforcements attempted to rescue him by the 25th, but as he finally realized the hopelessness of the situation, he surrendered his entire force and the city on October 20th.

Napoleon had won a great victory with barely a shot being fired, simply by superior maneuvering. Mack and his 27,000 remaining soldiers marched out of the city and laid down their arms as Napoleon and his officers watched.