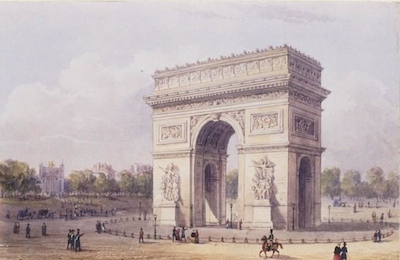 In 1806, the architect Jean François Thérèse Chalgrin was hired to analyze the best possible location and based on this study Napoleon selected the Place de l'Étoile. The first stone was symbolically laid that year on Napoleon's birthday, August 15th. In 1808 Chalgrin became the sole architect and in 1810 he finished revising the plans which became the framework for completing the structure over the next 26 years. That same year the people of Paris received a preliminary view of the monument as a full-sized wooden replica was built on site for the marriage between Napoleon and the Archduchess Marie Louise of Austria. Chalgrin died the next year and his pupil Louis Robert Goust became the new architect, continuing the work.

With Napoleon's abdication in 1814, all work on the Arc de Triomphe was halted even though more than a third had already been constructed. Almost ten years passed without any further work and then the French army, led by the king's nephew the Duke of Angoulême, successfully intervened militarily in Spain. King Louis XVIII ordered work on the Arc de Triomphe to resume but changed the intent to honor his nephew and his army's success in Spain. The architect Jean Nicolas Huyot was selected to lead the work, but controversy plagued the project and little progress was made.

With the July Revolution of 1830 and the ascent of the Citizen King Louis Philippe, the political atmosphere became friendly towards honoring the Revolution and Empire. Louis Philippe ordered the Arc de Triomphe to be completed and honor the Revolutionary and Imperial armies, leaders, and victories. Louis Philippe also fired Huyot as architect in 1832 and replaced him with Guillaume Abel Blouet. In 1833 the Minister of the Interior Adolphe Thiers led the selection of the sculptors to complete the four major sculptures on the lower exterior of the pillars. 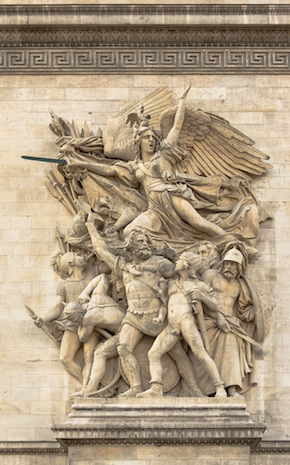 The Departure of the Volunteers of 1792 by François Rude 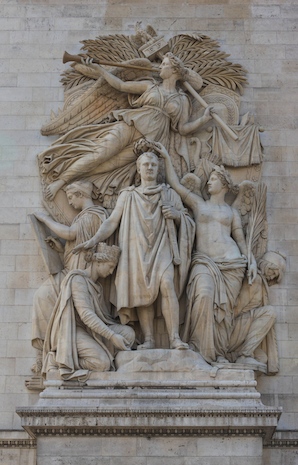 The Triumph of 1810 by Jean Pierre Cortot 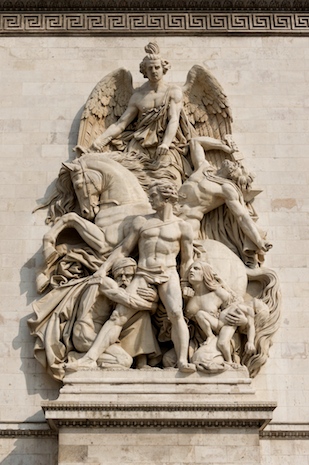 The Resistance of 1814 by Antoine Etex 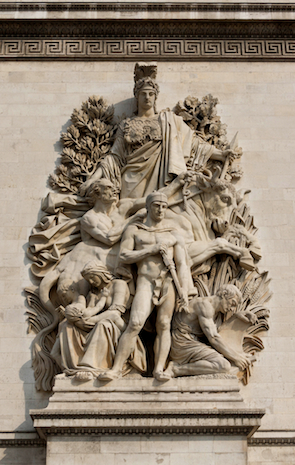 Meanwhile, the Ministry of War was tasked to create a list of names of officers and battles to be engraved on the monument, and Baron General Saint-Cyr Nugues was chosen to determine the names. As the monument neared completion, Saint-Cyr Nugues submitted 384 notable officers, 30 great victories, and 96 lesser battles. The Arc de Triomphe was finally inaugurated in 1836 but not without controversy. When Saint-Cyr Nugues' lists were released to the public, many families of notable generals of the Revolution or Empire complained to the Ministry of War and Ministry of Public Works that their illustrious family member was not included. 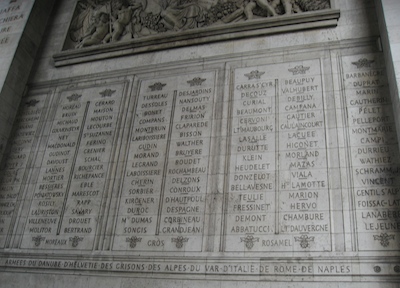 For the next few years, a stalemate ensued between the Ministry of Public Works and Ministry of War over whether or not more names could be added. Finally the Ministry of Public Works informed the Minister of War Marshal Soult that they had found room for 128 more names. Now able to resolve the complaints, Soult formed a commission to add more names to be honored. Marshal Oudinot presided over the commission made up of Generals Reille, Dode de la Brunerie, Petit, Pelet-Clozeau, and Schneider with the secretary being Saint-Mars. Marshal Soult then realized that not all arms were appropriately represented and added to the commission General Exelmans to represent the cavalry, General Neigre to represent the artillery, and Admiral Rosamel to represent the navy.

The commission began its work on December 5th, 1840, and ten days later the Arc de Triomphe witnessed the return of Napoleon's remains to Paris. Over 400,000 people attended a ceremony where Napoleon's coffin was placed in a chariot drawn by twelve black horses decorated in gold. The procession stopped directly underneath the arch before eventually laying Napoleon's remains to rest in Les Invalides.

Over the next few months the commission decided upon a series of names to add to the monument but went beyond the initial limits of 128, instead submitting 233 names. A new battle between the Ministry of War and Ministry of Public Works followed over the number of names that could be added. The Ministry of War eventually won when the architect Blouet found space to add more names while retaining the architectural integrity of the monument. By the end of 1842 there were now 652 names inscribed. Over the next five decades more names were added, with the last being added in 1895, bringing the total to 660. For more information on the 660 names that were engraved, please see the article "Names on the Arc de Triomphe". For the battles, eventually 158 battles were selected where 30 are considered great victories. For the list of the battles that were engraved, please see the article "Battles on the Arc de Triomphe".

Tomb of the Unknown Soldier

During World War I, discussions began about entombing an unidentified soldier in the Pantheon to commemorate those who died for France and were never identified. After the war the discussions progressed and a letter writing campaign eventually convinced the government that the tomb should reside underneath the Arc de Triomphe. An unidentified soldier was laid to rest in the Tomb of the Unknown Soldier beneath the arch in 1921. The inscription reads "Ici repose un soldat Français mort pour la patrie", which translates to English as, "Here lies a French soldier who died for his country". Two years later, a Memorial Flame was installed and lit on Armistice Day. The flame has never been extinguished and is rekindled every evening at 18:30.