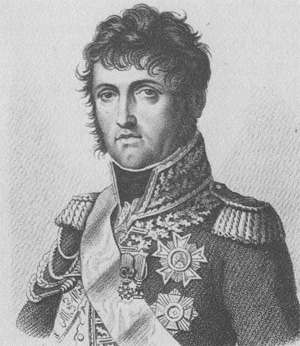 The Duke of Damnation and Hand of Iron, a Marshal of France best known for his campaigns in the Spanish Peninsula

Nicolas Jean de Dieu Soult was one of the many young soldiers who rose from obscurity to high command and proved himself a talented commander. Originally he wanted to open his own bakery, but when his father, a notary, died when Soult was 16, he enlisted in the Royal Infantry Regiment. Promoted to sergeant in 1791, his military training was in demand at the start of 1792 when he was sent as drill instructor to the 1st Battalion of Haut-Rhin. Six months later, he was promoted to sous-lieutenant.

Soult's first major battle came in March of 1793 when he fought at Ueberfelsheim. Later that year he was promoted to captain and fought at Bodenthal and Saverne before requesting to join the staff of the Army of Moselle. His request was granted and he was attached to the headquarters of Taponier's division. Fulfilling whatever needs were required, he frequently undertook special missions and fought at Niederbronn.

The next January, Soult was given the position of chief of staff of the advance guard division under Lefebvre of the Army of the Moselle. Less than two weeks later, he received a promotion to chef de bataillon. That spring his division joined the Army of the Sambre and Meuse and he received a promotion to chef de brigade. In June Soult served at the Battle of Fleurus where he had five horses shot out from under him.

In October, Soult's abilities were recognized as he was promoted to général de brigade and given command of a brigade in Hatry's division, having been a sergeant only three years earlier. Soult's brigade spent the next months securing Belgium and Luxembourg, and took part in the siege of Luxembourg. At one point he was invited by General Hoche to serve in his army against the rebels in the Vendée, but Soult declined saying he despised such work in his own country.

In April of 1796, Soult married Louise Berg of Solingen, whom he had met when quartered at her mother's house. Returning to campaigning, his brigade served in Lefebvre's division and fought at Altenkirchen, Wetzlar, Friedberg, and Wurzburg. The next year saw Soult taking command of the advance guard of Championnet's division and serving at Steinberg. In 1798 his division was planned for the Army of England, but instead in April it joined the Army of Mainz.

After serving with various divisions for the rest of that year, Soult's unit rejoined Lefebvre's division in February of 1799. That March he took part in the fighting around Stockach, first taking command of the division at Ostrach when Lefebvre was wounded, and then leading the attack at Liptingen. Within two weeks of these actions, he was promoted to général de division.

A week later, the army had united with Masséna's Army of Switzerland, and Soult was given command of the 4th Division. He occupied Schwyz and Altdorf, and then received command of an additional division, the 3rd Division. At the Battle of Zurich on September 25th, Soult's men were poised to bridge the Linth River in a surprise attack on the Austrian stores. Soult and his men successfully bridged the river and surprised the Austrians, contributing to the French victory. Soult was next given another division and ordered to direct the operations against Russian General Suvorov.

In 1800, General Soult was given command of the right wing of the Army of Italy under General Masséna. Their force was soon pushed back by the Austrians and they fell back to Genoa and its strong fortifications, beginning a lengthy siege. Soult frequently led sorties out from the fortress to assault the surrounding positions with some success. Unfortunately, during one of these sorties on May 13th he was hit by a ball in the leg, shattering it and rendering him unable to walk. As his aides attempted to improvise a stretcher made out of muskets, they were all captured. Soult was robbed and forced to endure his captivity in significant pain. Despite being released after the Battle of Marengo, he walked with a limp for the rest of his life, and many considered him a changed man. He would no longer lead from the front as as he had throughout the Revolution, and his strategies were far more cautious than before.

Marshal of the Empire

Soult was made a Marshal of France with the creation of the empire in 1804. With war declared in 1805, Soult's camp became IV Corps of La Grande Armée and quickly marched east to do battle with the Austrians. After crossing the Rhine in September, the next month his corps entered Augsbourg, was victorious at Landsberg, and seized Memmingen, helping to close the trap around the Austrians at Ulm. The next month his men took part in the fighting at Hollabrunn before maneuvering with the army into position at Austerlitz. At the Battle of Austerlitz, Soult's IV Corps formed the French center and was given the task of breaking the enemy center on the Pratzen Heights. As Napoleon watched the battle unfold that morning, he asked Soult, "How long will it take you to move your divisions to the top of the Pratzen Heights?" "Less than twenty minutes, sire," Soult responded. "In that case we will wait another quarter of an hour," Napoleon told him.1 Once the order to attack was given, Soult's IV Corps successfully smashed through the Allied center as Napoleon intended. Some allegations swirled that he had not taken much part in the battle once the attack was begun, instead giving only a few orders through aides.

In 1806, Soult again commanded IV Corps and took part in the campaign against Prussia. His corps fought at the Battle of Jena, but he again commanded from a distance through aides. In November his men served at Lubeck and took part in Blucher's surrender at Schwartau. The next February, against the Russians he was victorious at Bergfried, served at Hoff and Ziegel Ihoff, and then commanded the center at Eylau. In June he fought at Heilsberg and then seized Koenigsberg.

Many rewards followed for Marshal Soult, including being decorated by the orders of Saint-Hubert of Bavaria, the Golden Fleece of Spain, and the Seraphim of Sweden. In 1808, he was made the Duke of Dalmatia. While his own soldiers nicknamed him the "Hand of Iron", the British soldiers he would later fight used his title as a pun and called him the "Duke of Damnation."

November of 1808 saw Marshal Soult taking command of the II Corps in Spain. That month he won at Burgo and occupied Reynosa and Santander. Next he was given command of the pursuit of Sir John Moore's British army, and successfully trapped the British army at Corunna. Fighting at Corunna, his army was unable to prevent most of the British from escaping by sea once the British fleet arrived, though it was considered a victory for the French for driving the British out of Spain. When Soult learned of Sir John Moore's death in the battle, he ordered a monument built on Moore's grave to honor his adversary.

Next Soult's corps invaded Portugal, defeating La Romana at Moterey on March 4th. That month they went on to win at Verin, seize Chaves, win at Carvalho, and then seize Braga and Oporto. That May, after battling against Wellington's forces at Oporto, he was forced to retreat through Galicia and fall back to Castille. Then in September Soult was moved up in command, becoming Joseph Bonaparte's major general, now in command of multiple corps. In this new capacity he led the French forces to a major victory at the Battle of Ocana in November.

During his time in Spain and Portugal, Soult began to gain an unpleasant reputation for looting priceless paintings and gold from the areas under his control. However, his skillful discipline and planning kept the areas he monitored guerrilla free. Possibly desiring to be made King of Portugal, a scandal broke out as rumors of this spread, though he always denied that this was ever his intention. Despite his denials, some people began to call him "King Nicolas" in response to his failed ambitions and overbearing attitude.

Soult started 1810's campaigns by invading Andalusia, and seized Seville that February. After commanding in Andalusia throughout 1810, in early 1811 he laid siege to and took Olivenca. Next he laid siege to Badjoz, finally taking it in March. Instead of assisting Marshal Masséna's campaign to retake Portugal, Soult returned to Andalusia. When the British laid siege to Badajoz, Soult marched his army to relieve the fortress, but was defeated at the Battle of Albuera. After falling back and joining with the French Army of Portugal under Marshal Marmont, he once again made another attempt at relieving Badajoz, this time successful as the British retreated.

Soult's next actions were to march to the Kingdom of Granada, where he won at Venta del Bahul and Baeza in August. The next year when Badajoz was laid to siege again, he marched to relieve the fortress, but arrived too late. Returning to Andalusia, that August he decided to lift the siege of Cadiz after the loss of the Battle of Salamanca. Forced to fall back, he abandoned Granada and Andalusia and joined with Suchet's army in Valencia. In October of 1812 Soult retook the offensive, crossing the Tage on the 30th and then a few days later retaking Madrid. He followed Wellington's army up to the walls of Ciudad Rodrigo before halting the offensive.

At the beginning of 1813, Soult was recalled to France at Joseph Bonaparte's request. Initially taking a position with the Imperial Guard, he took command of IV Corps at the Battle of Bautzen. That July, he was sent back to Spain to take command of the Armies of Spain and the Pyrenees. With a demoralized army, he was repulsed at Cubiry, Irun, and Bidassoa. In December he was defeated at Saint-Pierre d'Irube, and fell back to the Adour River in France. In February he was defeated at Orthez, and then fell back to Tarbes and later Toulouse. Trying to defend Toulouse, he gave battle at the city but was again defeated. Finally, when news of Napoleon's abdication arrived, Soult called for a ceasefire and recognized the new king as King of France.

The Bourbons relieved Soult and then gave him a post, but eventually elevated him to Minister of War in December of 1814. Soult resigned from his post shortly before Napoleon's surprise return from Elba, and offered his services to Napoleon. Without Marshal Berthier to support him, Napoleon selected Soult to become his chief of staff of the Army of the North. Soult served at Ligny and Waterloo, and after the latter defeat he rallied the army at Laon and then handed command over to Marshal Grouchy. This time the Bourbons were not so forgiving, they proscribed him and he fled the country, almost being lynched by a mob. He stayed in exile with his wife's family in Dusseldorf, Germany until he was finally pardoned in 1819 and allowed to return to France.