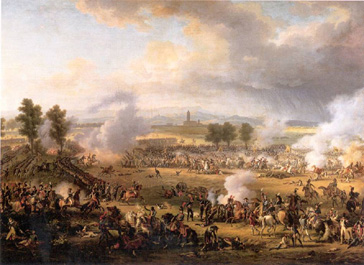 Napoleon had led the Army of the Reserve across the Alps through the Great Saint Bernard Pass in an effort to regain French control of Italy. The Austrians, caught off guard by this unexpected army in their rear, scrambled to concentrate their forces to meet the new French force. After the Austrians continued to fall back against his offensive, Napoleon became convinced that Austrian General Melas was falling back to Genoa to reunite with the significant force there. Anxious to win a great victory to help bolster the fledgling French government of the Consulate, Napoleon was determined to not let Melas escape to Genoa.

Little did Napoleon know that on the night of the 13th of June, Melas had decided to attack the French at Marengo. Due to the wide plains of the terrain, the superior numbers of Austrian cavalry and artillery could exploit the terrain to give the Austrians a significant tactical advantage. The Austrian plan was to drive through the center of the French forces, then turning and rolling them northwards, while simultaneously launching another attack on the left to fix the enemy's right in place.

In contrast, Napoleon had no plan, for he wasn't expecting a battle. His scouts had reported that the bridge over the Bormida River had been destroyed by the retreating Austrians, when in fact it stood strong and a second bridge, a pontoon bridge, had been built. More intelligence, most of it false from double agents and captured prisoners of war, confirmed that the Austrians were retreating. To attempt to stop the Austrians from reaching Genoa, Napoleon dispatched La Poype's division to the north and Desaix with Boudet's division to the south to block the roads.

At 7 AM on the morning of the 14th, the leading Austrian forces under General O'Reilly plowed into the surprised French outputs, pushing them back. However, O'Reilly's orders were to secure the right flank, so he immediately broke off the attack and turned south, allowing the following Austrian units to lead the attack but also giving Gardanne time to organize a defense of Marengo. General Victor brought forward Chambarlhac's division and took command of Duvigneau's cavalry, both units whose commanders had fled the scene, and established a defense behind the Fontanone Creek and ravine which offered some concealment and protection. Around 9 AM, General Melas received word of a significant enemy force approaching from the southwest, and suspecting Suchet's men, he dispatched General Nimptsch and 2340 cavalry to handle the threat. In reality, there was little threat from Suchet. By 10 AM, French General Lannes had brought Watrin's division forward on the right of Victor's troops, but the French were still outnumbered two to one.

Initially Napoleon thought the Austrian attack was a rear guard diversion to keep him from aggressively pursuing the Austrians. However, at 9 AM Berthier had ridden forward with the cavalry of the Consular Guard and realized the gravity of the situation. Berthier dispatched the 12th Chasseurs à Cheval to the south to cover the army's left flank and sent word to Napoleon that the Austrian attack was no diversion, but a full scale battle. As soon as Napoleon learned of this, he dispatched Captain Bruyère to Desaix, with the orders allegedly saying, "I had thought to attack Melas. He has attacked me first. For God's sake come up if you still can." As luck would have it, Desaix had been slowed down crossing a muddy river when he heard thunder in the distance, and guessing it was artillery, halted his march. He dispatched his aide Savary to find out what was going on, and Savary and Bruyères crossed paths, each telling the other where to find their respective commanders.


In the meantime the French line was seriously threatened on both sides. To the south, a brigade of Austrian cavalry under General Pilati found a narrow route across the creek, and after slowly crossing it, headed north to charge the French flank. Eager to attack the oblivious French infantry flank, they failed to notice French General Kellermann's cavalry bearing down on them. Kellermann charged into their force, and in the ensuing charges and counter charges, forced them back into the ravine. Also to the south,General Dampierre and a token force of Victor's men, while continuously pushed back, successfully occupied all of O'Reilly's attention, removing his forces from the main battle.

To the north, General Ott had successfully taken Castel Ceriolo after Champeaux's cavalry had charged and failed to stop the superior numbers of Ott's troops. Champeaux fell mortally wounded during the charge, and his men fell back. Now Ott turned south to attack Lannes' flank, who had few men to spare to fight on two different fronts. With Lannes in serious danger of being outflanked, and Victor running low on ammunition, they agreed to conduct a fighting withdrawal and began to fall back.

By 2 PM Napoleon had arrived at the front and sized up how bad the situation was. Determining the largest danger was on the right flank, he ordered the Consular Guard to reinforce Watrin on the right, and ordered Monnier's division forward to attack Castel Ceriolo to distract Ott's flanking maneuver. Around this time, the village of Marengo was finally lost to the Austrians despite a ferocious stand by General Rivaud. Monnier's brigades, led by Carra St. Cyr, successfully took Castel Ceriolo before Ott detached some units to turn around and deal with them. Ott's men forced the French brigades out of Castel Ceriolo and away to the northeast.

Despite Napoleon committing all his reserves, the strength of the Austrian attack combined with the loss of Marengo continued to force the French back. On the French left, some of Victor's units broke and ran for safety, but most conducted their retreat well. On the right, both the Consular Guard and Lannes' men fell back in good order. The Austrian cavalry charged them in a piecemeal fashion, and every time the French soldiers formed square and beat them back. Around 3 PM, seeing French soldiers retreating all along his front, General Melas concluded that the battle was won and left the battlefield, turning over command to his chief of staff, General Zach. General Kaim was placed in charge of the pursuit while Zach chose to go forward with the advance guard. Feeling victorious, the Austrians did not aggressively pursue the French, instead choosing to let the artillery continue to pick off French soldiers from a distance.

Around the time of Melas' departure, Desaix arrived on the field ahead of his men. Covered in mud in his simple blue coat and seeing the French retreating, he rode straight for First Consul Bonaparte. "What do you think?" Napoleon asked him as he arrived. Desaix pulled out his pocket watch and looked at the time. "This battle is lost," he told Napoleon, "But there is still time to win another." Heartened by Desaix's attitude, Napoleon reformed the French line around San Giuliano. Boudet's division under Desaix's command began to arrive around 4 PM, fresh and eager for combat. Desaix asked for artillery support of an attack led by his men, and Marmont promised him a battery of 18 guns would support the attack.

Marmont's battery opened fire on the leading Austrian units, the first concentrated artillery barrage the Austrians had received all day. After softening the Austrians up for twenty minutes, Desaix led Boudet's men forward with an attack. The attack broke the front ranks of the Austrians but stalled when the Austrian grenadiers counter-attacked and pushed Boudet's men back. In response, Marmont brought four guns forward enough to fire into the grenadiers at point blank range. Re-energized, Boudet's men charged again, and at this moment an Austrian ammunition wagon in the rear exploded, sending a deafening roar over the battlefield and stunning the Austrians momentarily. Kellermann, who had rallied as many cavalry as he could, charged into the Austrians, absolutely destroying their formations in the chaos. With the forward Austrian units having dissolved Austrian soldiers either fled for their lives or surrendered, and General Zach and several thousand Austrians found themselves surrounded and captured.

To the north, Ott saw the main Austrian forces collapse, and instead of attempting to rescue them, withdrew his men and retreated in good order. The French, too weary to mount an effective pursuit, retook their positions around Marengo but did not pursue further. The Austrians had lost approximately 6000 men killed or wounded, 8000 men captured, and 40 guns captured while the French had lost approximately 8000 men killed or wounded.

Napoleon had won a victory, not as great as he wanted, but given the circumstances, it was good enough. After negotiations with Napoleon, Melas signed the Convention of Alessandria within a few days, effectively removing Austrian influence from Italy. Unfortunately for the French, the victory had come at a high price, for Desaix had been shot through the heart as he led one of the charges of Boudet's men. Desaix's aide Savary found his body which was transported to the monastery at the top of the Great Saint Bernard Pass where he was buried. Napoleon returned to Paris, his victory helping to secure the Consulate's continued existence.