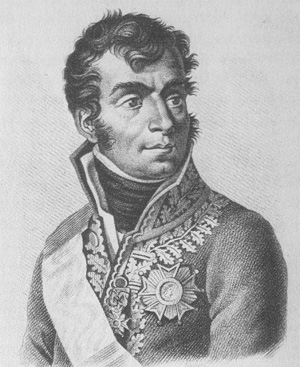 A friend of Napoleon's who later betrayed him, Auguste-Frédéric-Louis Viesse de Marmont's first military experience came in 1790 when he volunteered to join the battalion in garrison at Chartres. This initial experience gained him entry into the artillery school of Châlons in 1792 and after six months there he became a lieutenant in the 1st Foot Artillery. Sent to the Army of the Alps, Marmont served there until his unit was sent to take part in the Siege of Toulon . While at Toulon he was promoted to capitaine and became friends with a young Captain Bonaparte who made a significant contribution to the success of the siege. After the conclusion of the siege, Marmont went on to serve in the Army of the Rhine under Desaix.

At the beginning of 1796 Marmont's friend General Bonaparte made Marmont an aide-de-camp and promoted him to chef de bataillon. When Bonaparte took command of the Army of Italy, Marmont followed him there. During the campaign that year, Marmont served at Cherasco, Mondovi , Lodi , Castiglione , Saint-Georges, and Mantua. That October he was given the honor of taking captured enemy flags to the Directory and Napoleon promoted him to chef de brigade in the 2nd Horse Artillery while still keeping him as an aide-de-camp. After delivering the flags to Paris, Marmont made it back to the front in time to participate in the Battle of Arcola .

When the Army of the Orient was formed in 1798 for the expedition to Egypt, Marmont accompanied the expedition. As the fleet stopped at and then forcibly took Malta, Marmont took part in the fighting and seized the flag of the Knights of St. John, a feat that earned him a promotion to général de brigade on the same day. Once in Egypt he was given command of a brigade of Bon's division and he fought at Alexandria and the Battle of the Pyramids . Marmont did not take part in the expedition to Syria, instead being left at Alexandria to protect the rear. When in 1799 Napoleon decided to return to France, Marmont was one of the select few to accompany him. Marmont then went on to support the coup of 18 Brumaire that brought Napoleon to power as the First Consul.

During the years of peace that followed, General Marmont was named inspector general of artillery and then in 1803 he became the commander-in-chief of the artillery of the six camps that would form the Grande Armée. In 1804 he was named the commander of the camp of Zeist ou d'Utrecht in Holland. Despite Marmont's friendship with Napoleon and his successful career, he was not created a Marshal of the Empire when the Empire was proclaimed. Instead, he received the Grand Eagle of the Legion of Honor.

When war broke out in 1805, Marmont's camp became the II Corps of the Grande Armée and he led them throughout the campaign of that year. His forces crossed the Rhine and contributed to the surrender at Ulm, and then in November they won at Weyer and occupied Leoben. After the conclusion of the war, Marmont was named commander of the I Corps of the Army of Italy.

In 1806 Marmont received a new opportunity when he was named Governor General of Dalmatia and commander-in-chief of the French army there. Leading this army, he forced the Russian Admiral Siniavin to abandon the siege of Ragusa and then Marmont fought at Castelnuovo. Now free to govern Dalmatia, Marmont began to shine with administrative talent as he ordered the construction of miles of roads and major schools at Ragusa, Zara, and Sebenico. In 1808 Marmont was created the Duke of Ragusa in recognition of his achievements in Dalmatia.

1809 saw Marmont pulled away from administration to resume an active campaign when Napoleon ordered the Army of Dalmatia, renamed to the XI Corps, to take part in the campaign against the Austrians. That May Marmont won at Gospich and seized Fiume before fighting at Graz. His army joined up with the main army in Austria and took part in the Battle of Wagram but only as a reserve force. After that victory, Marmont's corps led the pursuit of the defeated Austrians and he won at Znaim. For his contributions, Marmont was appointed a Marshal of the Empire, though many believed his appointment was more due to his friendship with Napoleon than skill. Marmont then returned to the Illyrian Provinces where he continued to govern well.

In April of 1811 Marmont resumed a more active command when he was named commander of VI Corps in the Army of Portugal. Less than a month later he became commander-in-chief of that army. Marmont's initial task was to recover from the loss at Fuentes de Oñoro and he fell back to more safe positions. Over the coming months he successfully led a relief effort to lift the siege of Badajoz and then joined forces with Dorsenne.

The next year Marshal Marmont invaded Portugal, laying siege to Almeida and making it as far as Castel-Branco before he was forced to fall back to Spain when Marshal Soult was unable to support him. As the English General Wellington led his army after Marmont, Marmont evacuated Salamanca but left troops in the fortresses there, delaying Wellington's ability to continue a pursuit. Once his forces were concentrated, Marmont went on an offensive, successfully winning at Tordesillas. However, as the two armies raced against each other to seize important strategic positions, at Salamanca Marmont incorrectly judged that Wellington's force was retreating. As the French divisions marched forward, they were surprised and found themselves fighting the English without support. As soon as Marmont realized what was happening, he rushed forward to deliver orders, only to immediately be badly wounded by an exploding shell that broke his right arm and two ribs. The command of the French army fell to General Bonet, who was also wounded within the next twenty minutes, and then to General Clauzel, who did his best to salvage the situation.

Marmont immediately quit the army to return to France to recover from his wounds, and he remained unemployed until 1813. In March of 1813 he was given command of the VI Corps of the Grande Armée in Germany, and two months later he led them into battle at Lutzen where he commanded the left and then at Bautzen. That August he fought at Dresden and then in October he commanded the left at the Battle of Leipzig . As the army fell back from Leipzig, Marmont took part in the Battle of Hanau to secure the line of retreat before he was named commander at Mainz.

For the defense of France of 1814, Marmont continued in his command of the VI Corps. That January he concentrated his troops at Metz and then fell back from Verdun and Saint-Dizier before fighting at Brienne. The next month Marmont fought at La Rothière, Champaubert , Vauchamps , Montmirail, Meaux, and Tresmes. Marmont continued to fight into March, serving at Lizy-sur-Ourcq and Reims, but at Lâon his corps was badly defeated, partially due to his being nowhere near the battlefield, having left his troops. Nevertheless, he remained in command and served at Reims and Fismes before being beaten at Fère-Champenoise. Falling back, Marmont forced a crossing at Sézanne and then was defeated at La Ferté-Gaucher before he took up a defensive position at Paris.

Now defending Paris, Marmont was tired of war and no longer believed in Napoleon's ability to win. He negotiated a truce with the Allies to hand Paris over to them, hoping to save the city from a siege and significant damage. However, as part of this truce, he did not inform his men and instead ordered them along a route that brought them into position to be entirely surrounded by the Allied armies, forcing them to surrender. This act ruined his reputation and convinced Napoleon at Fontainebleau to to abdicate the throne. The French were so astonished by Marmont's treachery that a new verb raguser entered the language meaning "to betray".

With the return of the Bourbons, Marmont was made a Peer of France. When Napoleon escaped from exile in 1815, Marmont followed the king to Ghent, having little choice given what Napoleon thought of him. Napoleon struck him from the list of marshals, but when Napoleon abdicated a second time the king returned with Marmont. Marmont sat on the trial of Marshal Ney and voted for death, further ruining his reputation.

In later years Marmont spent time as the ambassador to Russia, but in 1830 he was in France and in command of the 1st military division of Paris. When in July of 1830 the people of Paris rose up against the policies of King Charles X, Marmont was indecisive but supported Charles X. Leading poorly, what few troops he could command were beaten. Despite being insulted by Charles X's son, Marmont accompanied them in fleeing the country and never returned to France. He spent the next several years traveling to England, Holland, Austria, Russia, Turkey, and Egypt and trying to justify his past actions.