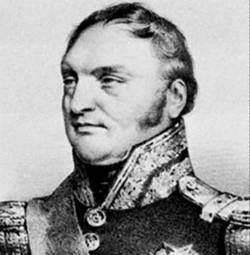 Général de division best known for his service in Spain

Joining the military at the onset of the Revolution, Bertrand Clauzel began his career in July of 1789 when he joined the National Guard of Mirepoix. In 1791 Clauzel became a sous-lieutenant in the 43rd Infantry, and the next year he joined the Army of the North. In September of 1792 he was sent south, where he became a capitaine of Chasseurs à Cheval in the Legion of the Pyrenees. Joining the Army of the Eastern Pyrenees, in 1793 he was promoted to chef de bataillon and in December he served under General Pérignon. The next April Clauzel became Pérignon's chief of staff. In 1795 Clauzel was promoted to chef de brigade and given the honor of bringing twenty four flags taken from the Spanish back to Paris to present to the National Convention. Once peace was signed with Spain, he briefly served in the Armies of the Coast of Brest and Cherbourg before following Pérignon to Spain after Pérignon was appointed ambassador to Spain.

In 1798 Clauzel was put at the disposition of the Army of England and he became the chief of staff to General Grouchy. That December he negotiated the abdication of the King of Sardinia. 1799 was a busy year for Clauzel as he was promoted to général de brigade, made commander at Alexandria and later Bologne, and then he fought at the Battle of Novi under his old commander, Pérignon. In 1800 he took command of the 4th Division under General Suchet, and during the campaign that spring he seized the tower of the redoubts of Melogno and participated in the attack on Monte-San-Giacomo. Months later in December he fought at Pozzolo and Monzembano.

Late 1801 saw General Clauzel being designated as part of the army sent to Saint-Domingue. As part of Desfourneaux's division, he seized Port-au-Prince. In July of 1802 he briefly served as inspector general of gendarmerie, and that September he was promoted to général de division by General Leclerc. On the same day as his promotion, General Clauzel took command of the left division of the north. That December he seized Fort-Dauphin and became commander at Cap Français, and then he took command of the right of the north until the final surrender of the French in Saint-Domingue. In September of 1803, Clauzel was ordered to depart Saint-Domingue and return to France. Unfortunately for Clauzel, his ship was shipwrecked on the coast of Florida. He made his way to New York and obtained a new trip across the Atlantic to return to France.

General Clauzel's next major assignment came in November of 1805 when he was named commander of the 2nd Infantry Division in the Army of the North. In 1806 he was employed in Holland, and that September he traveled to Italy to command the depots of the Army of Naples. In January of 1808 Clauzel joined the Army of Dalmatia and became the commander at Ragusa, and the next year he took command of the 2nd Division of XI Corps under General Marmont. In May of 1809 Clauzel fought at Gospich, and then later that year he served as interim commander of XI Corps before returning to Paris.

Clauzel was next sent to the Army of Spain where he took command of a division of Junot's VIII Corps. In 1810 he joined the Army of Portugal, became a Baron of the Empire, and fought at Sobral. Two years later in 1812 he fought at the Battle of Salamanca where he took command of the army after both Marshal Marmont and General Bonet were wounded. It was an unlucky command to receive, for Clauzel was also wounded there, being hit in the right foot by a shot. Clauzel directed the retreat after the loss of the battle and then fell back to Burgos. That September he relinquished command of the army to General Souham, and then two months later he obtained a leave to recover from his wounds.

In January of 1813 Clauzel was back in action, taking command of the Army of the North in Spain. Later that year he was rewarded with the Grand Cross of the Order of the Reunion. That July Clauzel took command of the left wing of the Army of the Pyrenees under Marshal Soult, and he fought at Ibagnetta and Cubiry. He continued to fight, in August seizing the pass of Berra and in November he and his men were repulsed on the Nivelle. In 1814 Clauzel fought at Orthez , won at Aire, and served at Toulouse before receiving word of Napoleon's abdication.

The returning Bourbons rewarded Clauzel as a Knight of Saint Louis and Grand Cross of the Legion of Honor, but he did not hesitate to rejoin Napoleon when Napoleon returned from Elba in 1815. Napoleon placed Clauzel in charge of defending the Western Pyrenees and made him a Peer of France. After Napoleon's second abdication, Clauzel evacuated Bordeaux and was suspended and proscribed. He left France for the United States and the next year a council of war in France condemned him to die. Living in the United States, Clauzel settled near Mobile, Alabama where he tended a vegetable garden and brought his produce to the market himself.1

In 1820 General Clauzel received an amnesty from the King and he returned to France to resume his career. In 1831 he was created a Marshal of France.