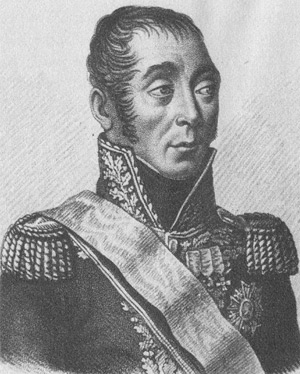 Born into a noble family, Emmanuel de Grouchy's first military experience came in 1780 when he entered the artillery school of Strasbourg. The next year he became a sous-lieutenant of the Foot Artillery of Besançon, and then in 1784 he transferred to the cavalry as a capitaine. Two years later Grouchy was named to the Scottish Company of the Guard of the King, but he only stayed there for a year before leaving the army altogether. In the meantime his sister Sophie de Grouchy had married the Marquis de Condorcet who would later play a prominent role in the French Revolution. Despite his noble birth, Grouchy supported the Revolution from the onset. At the end of 1791 he became a lieutenant colonel in the 12th Chasseurs à Cheval and then in 1792 he became colonel of the 2nd Dragoons and later the 6th Hussars. That year he served in the Army of the Center and the Army of the Alps before being promoted to maréchal de camp in September of 1792. In 1793 Grouchy was sent to the Army of the Coasts of Brest to fight against the rebel forces, and there he met and became mentored by General Hoche. During the fighting that year he defended Nantes against Charette and then repulsed the Vendéens at the camp of Sorinières. However, at the end of September Grouchy was suspended from the army due to his noble birth.

November of 1794 saw Grouchy being reintegrated into the army in the Army of the West. The next April he was promoted to général de division by the representatives of the people and he took the position of Hoche's chief of staff. Grouchy took part in the combat at Quiberon in the summer of 1795 and he continued to serve under Hoche against the rebels in the Vendée. Whenever Hoche was absent, Grouchy would often serve as interim commander. In 1796 his sister Charlotte-Félicité married the notable philosopher and doctor Cabanis. Later that year Grouchy was named deputy commander of the expedition to Ireland under General Hoche that departed France but ultimately failed when the ship carrying Hoche was separated from the rest of the fleet by a storm.

Once back in France, Grouchy was named commander of four military divisions in the west of France. After brief service in the Army of the North and the Army of Mainz in 1798, Grouchy was sent to Italy. In May of 1799 he became chief of staff to General Moreau and then in June he won at San Giuliano. That August Grouchy served on the left wing at the Battle of Novi where he was repeatedly wounded before being taken prisoner at Pasturana. Even though he was being held as a prisoner of war, Grouchy took the time to write a letter back to France protesting the establishment of the Consulate. Grouchy was exchanged and released in 1800 and that November he was named commander of the 1st Division in the Army of the Rhine. Taking up this command on December 1st, two days later he led his men into battle at Hohenlinden, contributing to the victory there. In 1801 Grouchy was named inspector general of cavalry and in 1803 he was sent on a mission to Etruria and named commander of cavalry at the camp of Bayonne.

In 1804 Grouchy supported Moreau during Moreau's trial, but this does not appear to have hurt his career, as he was named commander of the 2nd Division of the corps in Holland under General Marmont. When the Grande Armée marched to war the next year, this corps became the II Corps of the Grande Armée and Grouchy continued to command his division during the campaign, fighting in October at Wertingen, Gunzbourg, and Ulm. In April of 1806 Grouchy was replaced in his command due to an illness. He returned to an active command that September and at this time he returned to the cavalry, taking command of the 2nd Dragoon Division in the Cavalry Reserve. Taking part in the campaign against Prussia that year, Grouchy served at Zehdenick and Prentzlow in October, then at Lubeck in November, and finally Thorn and Biezun in December. When the campaign unexpectedly resumed in early 1807, Grouchy served at Ziegelhoff and Eylau, where his horse was killed from under him and he was wounded. When the campaign resumed later that year, Grouchy served at the Battle of Friedland. Afterwards he was awarded the Grand Cross of the Military Order of Bavaria and the Grand Eagle of the Legion of Honor.

In 1808 General Grouchy was given command of the cavalry of the Army of Spain. He was also named Governor of Madrid and when Madrid rose in revolt that May he put down the insurrection. Five months later he was sent to the Army of Italy, and in January of 1809 he was made a Count of the Empire. When the Austrians went on the offensive in Germany and Italy that April, Grouchy took command of the 1st Dragoon Division in the Army of Italy. That May he served at Piave and the siege of Graz, and then in June he won at Stein am Anger, Vasvar, and Papa before helping win the Battle of Raab . After the French-Allied armies linked up, Grouchy served at the Battle of Wagram by having his division cover the extreme right of the French line. After that victory, Grouchy was given the honorary title of Colonel General of Chasseurs and he became a Commander of the Iron Crown. He returned to France to rest until 1811 when he resumed command of a cavalry division in Italy.

Preparing for the campaign of 1812 against Russia, Grouchy was named commander of the III Cavalry Corps in January of 1812, answering to Prince Eugene who he had served under in Italy. During that campaign Grouchy seized Orcha and Liady and then he fought at Borodino where he was wounded by grapeshot to the chest. During the retreat he served at Maloyaroslavetz and Krasnoe before assuming command of the Sacred Battalion, a unit composed entirely of officers and dedicated to the protection of Napoleon. Having survived the retreat, Grouchy returned to France in 1813 and requested to receive an infantry command, stating that his health was not strong enough to command cavalry anymore. Napoleon refused his request and named him commander of III Cavalry Corps at Metz, but Grouchy then requested to be put on non-activity, which was granted. As France was threatened at the end of 1813, Grouchy returned to service and he was named commander-in-chief of the cavalry of the Grande Armée. During the campaign in France that followed, he served at Brienne, La Rothière, Vauchamps , and then he was wounded at Troyes. That March he seized Braisne and later that month he was wounded at Craonne by a shot to the thigh. After Napoleon's abdication in April, the restored Bourbons eventually made Grouchy the inspector general of chasseurs and lancers.

When Napoleon returned from exile in 1815, Grouchy rallied to him and was given command of the Army of the South to fight against the Duke of Angoulême and his royalist forces. Grouchy made short work of the duke's army and even took the duke prisoner, and afterwards Napoleon rewarded him by making him a Marshal of France and Peer of France. Grouchy was next given command of the Cavalry Reserve in the Army of the North. After fighting at the Battle of Ligny on June 16th, he was ordered to command the right wing of the army and follow the defeated Prussian Army to ensure they did not join up with the British Army. On the 18th his force encountered the Prussians at Wavre, but then he and his officers heard the roar of cannons from Waterloo. General Gérard begged Grouchy to march their forces to Waterloo but Grouchy refused, citing his orders from Napoleon. Meanwhile he launched his men into an attack against a holding force at Wavre while a large part of the Prussian army slipped away to make a decisive impact on the outcome of the Battle of Waterloo. An order to march to Waterloo came too late in the day for him to be able to intervene. To Grouchy's credit, once he learned of the French loss at Waterloo he carefully withdrew his force and eluded Prussian attempts to isolate and destroy his corps. Since his corps was less demoralized and more organized than those that fled Waterloo, he took up the role of a rearguard. Once Grouchy and his force joined up with the remnants of the French army, Marshal Soult gave command of the army to Grouchy and then left for Paris. Overcoming a number of obstacles, Grouchy successfully led the army back to Paris so that it could help defend Paris from a foreign occupation. Not wanting to be involved with the politics of what government would follow Napoleon's, he immediately resigned and handed over command of the army to Marshal Davout.

Since Napoleon had abdicated a second time and Grouchy knew the Bourbons would come seeking revenge, he prepared to leave France. As expected, the Bourbons proscribed him at the Second Restoration, and Grouchy traveled to the United States to take refuge, residing in Philadelphia. He was finally amnestied in 1819 and he therefore returned to France in 1820, though it would take another ten years and the government of Louis Philippe to restore his rank of Marshal of France.