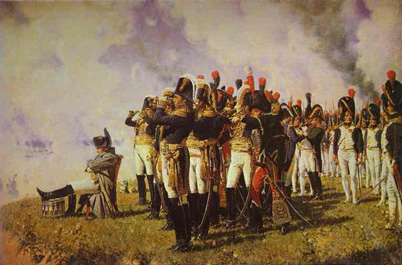 General Kutusov had been appointed as the new commander of the Russian forces and ordered to make a stand to attempt to prevent the French from reaching Moscow. At Borodino his forces of about 120,000 soldiers converged and prepared defensive works, ready for the oncoming French. When Napoleon realized the major battle he had been seeking in Russia had finally arrived, his soldiers advanced and converged on the area, forming a strength of about 133,000 soldiers. Complicating matters, Napoleon was ill and did not appear to be his usual energetic self.

On September 7th, the French began their attack. Initially successful, the advance ground to a halt and both sides suffered significant casualties. Each time the French were close to exploiting a success, the Russians were able to hold firm or counterattack. Napoleon's marshals and generals repeatedly sent pleas for him to commit the Imperial Guard to deliver the decisive blow, but Napoleon refused and held them in reserve. By the end of the day the French had taken the original positions of the Russians, but the Russians were still a strong fighting force and had fallen back to a new position in good order. Overnight, General Kutusov decided to retreat and allow the French to take Moscow. Napoleon was surprised that the Tsar Alexander would allow Moscow to be taken, but Kutusov's army would live to fight another day.

Borodino was one of the bloodiest battles of the entire period in sheer numbers of casualties and rounds fired.