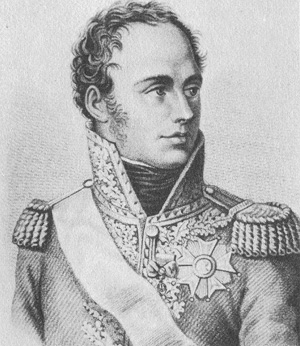 Stepson of Napoleon who served as the Viceroy of Italy

The stepson of Napoleon, Eugène-Rose de Beuharnais' biological father was guillotined during the Revolution in June of 1794. At the time Eugene was apprenticed as a carpenter and his mother Josephine was only spared a similar fate by the overthrow of Robespierre at the Thermidorian Reaction a month later. In 1795 Eugene first met his future stepfather when he went to Napoleon, then commander of the Army of the Interior, to request his deceased father's sword. When Napoleon fell in love with and married Eugene's mother Josephine, Eugene initially resented it but grew to love his stepfather.

Napoleon took command of the Army of Italy in the spring of 1796 and Eugene accompanied the army, receiving a position in Masséna's division. After serving throughout the first Italian campaign, in June of 1797 his stepfather General Bonaparte promoted him to sous-lieutenant and made him an aide-de-camp. The next year Eugene followed Napoleon as an aide-de-camp in the Army of the Orient on the expedition to Egypt. Napoleon promoted him to lieutenant in January of 1799, and Eugene served at the Siege of Jaffa where he entered the city and promised safety to the defenders if they would surrender. Eugene continued on that campaign and served at the Siege of Acre where he was wounded in the head by an explosion. When Napoleon decided to leave Egypt and return to France, he took Eugene with him.

Once back in France, Napoleon seized power in a coup d'état and established the Consulate. He appointed Eugene a capitaine in the Chasseurs à Cheval of the Consular Guard, and Eugene went on to serve in the Army of the Reserve and distinguish himself at the Battle of Marengo. Returning to Paris on July 14th, the anniversary of the storming of the Bastille, Eugene was with the Consular Guard when they interrupted the ceremony at the Champ de Mars by riding in in their battle uniforms and carrying captured Austrian flags. The crowd went wild with cheers and Eugene considered it one of the best moments of his life.1

Two years later Eugene was promoted to chef d'escadrons and then in 1804 when the French Empire was established he became an Arch Chancellor of State. More rewards followed, for in October of 1804 Eugene was promoted to général de brigade and named commander of the Chasseurs à Cheval of the Imperial Guard, though in reality the actual duties of command of that unit went to other officers. In 1805 Eugene was declared a French Prince, given the Grand Cordon of the Legion of Honor, named Viceroy of Italy, and he received the Grand Cross of the Order of the Iron Crown and the Grand Cross of the Order of Saint Hubert of Bavaria. As Viceroy of Italy, Eugene essentially ruled Italy though he followed Napoleon's orders.

In 1806 Eugene was formally adopted by Napoleon and Eugene married Princess Auguste-Amélie of Bavaria. While Napoleon had arranged the marriage to strengthen the alliance with Bavaria, Eugene and his wife grew quite fond of each other. Napoleon also granted Eugene the title of Prince of Venice.

Eugene returned to his administrating in Italy until 1812. For the campaign against Russia of 1812, Eugene led the Army of Italy to join the Grande Armée. His force was renamed to IV Corps but he led them throughout the campaign, serving at Ostrowno, Witepsk, Smolensk , Borodino, Krasnoe, and the Berezina. When in December Napoleon left the army to return to Paris to stabilize the situation, he placed Marshal Murat in charge. However, Murat was worried about his Kingdom of Naples and he left the army at the earliest opportunity in January. At this time, Eugene stepped up and assumed command of the army, leading it back into Germany and fighting off the enemies of the French.

Once Napoleon resumed command of the army in 1813, Eugene took command of the V and XI Corps of the army. After serving at the Battle of Lutzen, he was sent back to Italy to command the troops in Italy and the Illyrian provinces. That November Eugene's father-in-law King Maximilian of Bavaria, who had very recently defected as an ally of France, suggested that if Eugene defected to the Allies they would permanently make him King of Italy. Eugene responded that, "If the Emperor's star was paling then it was all the more reason for those who had shared in his glories to remain faithful."2 In 1814 as France was threatened, Eugene continued to hold Italy and delay the Austrian forces, and he won at the Mincio that February. The Allies did offer to make him King of Italy if he abandoned Napoleon, but he refused their offer and remained loyal to his stepfather. Marshal Murat's defection of the Kingdom of Naples made Eugene's defense of Italy more difficult, as he then had to defend against the Austrians in the northeast and Murat and the Neapolitans in the south. After Napoleon abdicated, Eugene signed a treaty with Austrian General Bellegarde to end hostilities in Italy, and he then turned over command of his troops to General Grenier and his viceroy powers to General Pino.

Eugene next retired to Bavaria to live with his wife's family. When Napoleon escaped from Elba for the Hundred Days in 1815, he named Eugene a Peer of France but Eugene did not leave Bavaria. Instead, he gave his word to his father-in-law King Maximilian of Bavaria that he would not participate, and he therefore took no part in the Hundred Days. He spent his later years trying to assist French soldiers who had served with Napoleon and himself and had fallen on hard times, but he unfortunately died of a cerebral hemorrhage at age 42.