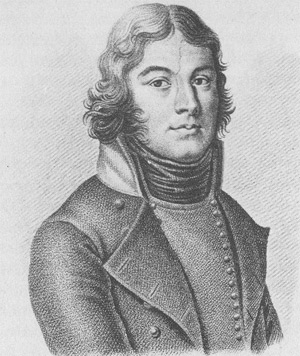 The son of a stableman to the equerries of the king, Louis Lazare Hoche followed in his father's footsteps and became a stable boy to the equerries of the king in 1782. Two years later he joined the army to see the world, only to discover he would be assigned to the French Guard at home. At the dawn of the French Revolution in 1789 Hoche was still just a corporal and he served during the Réveillon riots in April. That August he left his regiment and joined the National Guard as a sergeant. On October 5th and 6th of that year, Hoche participated in the march to Versailles as part of the National Guard.

January of 1792 saw Hoche promoted to lieutenant and joining the 10th Infantry Regiment. That May he went to Thionville and then in September he was promoted to capitaine, and he went on to serve at Valmy and Jemappes . During the winter of 1792 he took part in the defense of Thionville and then the Sieges of Namur and Maestricht, and in March of 1793 he became Le Veneur's aide-de-camp when that general personally saw Hoche in action. Hoche fought at the Battle of Neerwinden where he was wounded, and afterwards when the army's commander General Dumouriez defected in April, Hoche rallied many of the volunteers to resist Dumouriez's call to march on Paris. Regardless, both Le Veneur and Hoche came under scrutiny for their association with Dumouriez. Hoche traveled to Paris to defend himself and Le Veneur, and in the meantime he was promoted to chef de bataillon. That August he was finally arrested and taken to Douai where he was tried, acquitted, and released.

Once free, Hoche traveled to Dunkirk where he was made chief of staff to General Souham, earning a promotion to chef de brigade at the same time. Three days later he was promoted to général de brigade, and next he went with Vandamme on the expedition against Furnes, Nieuport, and Ostend. On the 22nd of September Hoche's forces took Furnes, and the same day he was named chief of staff to the Army of the Ardennes. A month later Hoche was promoted to général de division and named commander-in-chief of the Army of the Moselle, having been a chef de bataillon only six weeks earlier.

Taking charge of the Army of the Moselle on November 2nd of 1793, Hoche initially suffered defeats that month at Bisingen and Kaiserslautern. However, he made up for it the next month, winning at Woerth and Geisberg, liberating Wissembourg, and lifting the Siege of Landau. March of 1794 was a busy month for Hoche as he was named chief of the expedition to Oneglia and he returned to Thionville to marry Adélaïde Dechaux, daughter of a grocery store keeper. Unfortunately, General Pichegru had made allegations of treason about Hoche, and an order for Hoche's arrest was issued on March 20th. As Hoche arrived in Nice at the quartermaster of the Army of Italy on April 1st he was arrested and then sent to Paris. He was initially imprisoned at Carmes and then in May he was moved to the Conciergerie. While in prison, he met the widow of General de Beauharnais, Josephine de Beauharnais, who was to later become the wife of General Bonaparte. Trapped in the prison with uncertain fates, they allegedly became lovers and were not released until after the fall of Robespierre at the Thermidorian Reaction.1

Once again acquitted of all charges, Hoche was now named commander of the Army of the Coast of Cherbourg. Over the next year he would command various armies against the rebels in the Vendée, scoring victories that eventually culminated in signing the pacification of the Jaunaye with Charette in February of 1795. Next Hoche led his men to a victory at Quiberon over a force of French royalist émigrés that had been transported to the peninsula by the British. With fighting in the Vendée still going on, Hoche's men successfully captured the leaders Stofflet and Charette, and then he obtained the surrender of Scépeaux and later the Chouans of Morbihan. Throughout the campaign he earned a reputation for humanity despite the brutality of the civil war.

In July of 1796, Hoche was selected to command the expedition to Ireland. He clashed with the admiral in charge of the naval preparations, Villaret-Joyeuse, and succeeded in convincing the Minister of Marine Truguet to replace Villaret-Joyeuse. In the midst of Hoche's preparations, he escaped an assassination attempt in Rennes on October 16th when a man paid by a former Chouan leader tried to shoot him and missed. Hoche's squadron of ships set sail for Ireland on December 17th but a fierce storm separated the ships. By the time his ship had arrived at the designated meeting location of Bantry Bay, the other ships of the fleet had decided to return to France. He arrived back in France on January 13th, and then on the 24th he was named general in chief of the Army of the Sambre and Meuse. That April he led his army to victory at the Battle of Neuwied , and then in July he quit his command and returned to Paris leading 15,000 of his troops to support the coup of 18 Fructidor to oust the royalists.

The Directory attempted to make Hoche the Minister of War, but he refused the position. Instead, he returned to his position as commander of the Army of the Sambre and Meuse. On the 10th of September, he was also placed in charge of the Army of the Rhine and Moselle. Barely more than a week later, he had caught a bad cough and died unexpectedly at four in the morning in Wetzlar, Germany. Rumors of poison circulated but were never substantiated, and he most likely died of tuberculosis.

Napoleon once said that Hoche was one of the best generals that France had ever produced and "a true man of war".2