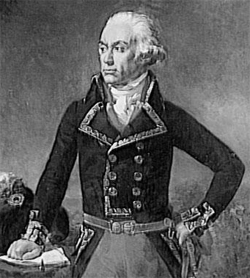 The son of a commissary of war, Charles François Dumouriez initially wanted to be a monk before deciding upon a career in the army. He first joined the military in 1758 when he volunteered to join a cavalry regiment during the Seven Years War. That year he also became an aide-de-camp of the Count of Armentières and then served on the staff of Marshal de Broglie. In 1759 Dumouriez was severely wounded at Munster and then in 1760 he was fighting at Clostercamp when he was almost killed by a musket ball to the chest that was only stopped by a book in his coat. He was again wounded at Warburg and then later that year he was foraging when he was attacked, received nineteen wounds, and taken prisoner. The next year he was promoted to capitaine, and then in 1763 he was named a Knight of Saint Louis.

After the conclusion of that war, Dumouriez began taking on missions of secrecy, working for the Duke of Choiseul. He offered his services to the Republic of Genoa, and later to Pasquale Paoli to support the Corsican freedom fighters. Meanwhile the French government also sent Dumouriez on a secret mission to the Spanish court at Madrid and he visited Portugal. In 1768 he served with the French army dispatched to Corsica where he claimed he contributed greatly to the victory there. The next year Dumouriez was promoted to mestre de camp, and in 1770 he was sent on another mission, this time to Poland to introduce reforms in the Polish army and help the leaders who desired a war between Poland and Russia. After returning to France in 1772, he was next sent in secret to Sweden where King Gustav III had recently taken power. On his return, Dumouriez was arrested at Hamburg by order of the Duke of Aiguillon, and he was returned to Paris only to be thrown in prison for many months. Dumouriez was released not long after Louis XVI took power in 1774, and the next year Dumouriez was employed at Lille. In 1778 he named commander of Cherbourg and he set about improving and fortifying the city and harbor. Ten years later in 1788 he was promoted to maréchal de camp.

With the onset of the French Revolution in 1789, General Dumouriez was placed in charge of the National Guard of Cherbourg. The next year he, the Marquis de Lafayette, and Mirabeau all joined the Jacobin Club, and then in 1791 he was employed in the 12th military division at Nantes. In early 1792 Dumouriez was promoted to lieutenant general and then appointed the Minister of Foreign Affairs. In this position he declared war on Austria and then in June he was given a command in the Army of the North under Marshal Luckner. Snubbed by Luckner and Lafayette, Dumouriez fortified the camp of Maulde, trained his troops, and recruited the Fernig sisters, who had already distinguished themselves in combat, as aides-de-camp. Lafayette later took command of this army, but when Lafayette fled the country in August Dumouriez was placed in charge of the army. That September Dumouriez summoned General Kellermann to bring his army to make a stand and they successfully blocked the Prussian march on Paris at the Battle of Valmy, ensuring the French Revolution could continue.

Next General Dumouriez was placed in charge of the Army of Belgium, and in November he won the Battle of Jemappes . With such inexperienced troops, Dumouriez frequently had to resort to extremes to keep his troops from fleeing in a panic, becoming known for beating his troops with the flat of his saber to rally them and then shaving the heads and eyebrows of the cowards who caused such panics. The politicians in Paris criticized this punitive attitude towards "fellow patriots" but kept him in command, and under his command the French army conquered Belgium.1 Dumouriez then returned to Paris where he was badly received by the Jacobins and therefore he allied himself with the Girondins. Given command of the Army of the North again in early 1793, Dumouriez next invaded Holland where he took Bréda, Klundert, and Geertruidenberg. However, that March he was beaten at the Battle of Neerwinden by the Austrians.

After the defeat at Neerwinden, Dumouriez entered into negotiations with Austrian Colonel Mack for the French to withdraw behind Brussels without harassment. Additionally Dumouriez was now concerned about the direction of the French Revolution and his own safety, and so he entered into another secret negotiation with Mack. They agreed that Dumouriez would hand over Belgium to the Austrians and then march with his army on Paris, with the Austrian army supporting him but not entering France. By this time Dumouriez was under suspicion and numerous representatives of the National Convention, including the Minister of War General Beurnonville, were with the army to monitor his progress. On April 2nd, 1793, the representatives confronted Dumouriez and he responded by arresting them and handing them over to the Austrians, beginning his plan. He then began issuing orders and traveling to and from the Austrian camp to coordinate the next steps. Dumouriez next asked his troops to march with him to Paris, but most were decidedly against the idea and Lieutenant Colonel Davout attempted to arrest him. Dumouriez, his chief of staff Pierre Thouvenot, his friend Louis Philippe the Duke of Chartres, and his aides-de-camp the Fernig sisters fled on horseback for the relative safety of the Austrian camp.

Dumouriez was now unemployed, and he traveled through Belgium and Franconia. Back in France the enemies of the Girondists used his affiliation with them as an initial excuse to start removing Girondists from power. Meanwhile Dumouriez went to Cologne and Stuttgart but at both places he was poorly received and therefore he continued on. He traveled throughout Europe and even offered his services to Tsar Paul I of Russia, who declined.

Finally Dumouriez arrived in England where the British gave him a pension. While there he helped bring together a meeting between his friend Louis Philippe the Duke of Chartres and the future Louis XVIII, known at the time as the Count of Provence. In 1808 he became active in military matters again, consulting with Spanish guerillas and Arthur Wellesley the future Duke of Wellington on how to resist the French. After both of Napoleon's abdications and the Bourbon Restorations, the Bourbons refused to allow Dumouriez to return to France and he therefore remained in England until his death.