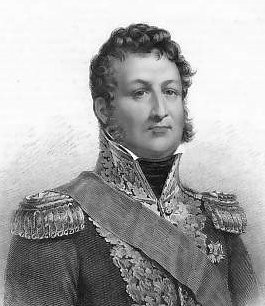 The oldest son of the Philippe-Egalité the Duke of Orléans, Louis-Philippe d'Orléans was first named the Duke of Valois and raised by Madame de Genlis. In 1785 at the young age of twelve he received the title of Duke of Chartres and he was named colonel of a regiment of infantry and a regiment of dragoons, both bearing his title of Chartres. Despite their noble births, both Louis-Philippe and his father supported the French Revolution and in 1791 Louis-Philippe resigned command of his infantry regiment but he remained colonel of the 14th Dragoons. While his father was involved in politics in Paris, Louis-Philippe remained with the army and joined the Army of the North under General Biron's command in 1792. That May he was promoted to maréchal de camp and given command of a brigade of dragoons and then in August he served under General Valence in the Army of the Center. The next month Louis-Philippe was promoted to lieutenant general and he served under General Kellermann at the Battle of Valmy. Louis-Philippe next served under General Dumouriez in the Army of Belgium and he commanded the center at the Battle of Jemappes in November. Continuing to serve in the French army, he commanded the center again at the Battle of Neerwinden in March of 1793. Afterwards Louis-Philippe was ordered arrested by the Committee of General Safety and General Defense, and he joined Dumouriez in escaping French capture and fleeing to the Austrians.

However, Louis-Philippe refused to serve against the French and refused an Austrian offer to serve in their armies. Later that year his father was executed during the Reign of Terror, and his flight from France did not support his father's case against the extremists who had taken power. Upon the death of his father, he ascended to the title of Duke of Orléans. Unable to return to France and refusing to serve against France, Louis-Philippe began a wandering life, traveling throughout Europe. During his travels, he at times took up a job as a schoolteacher, teaching lessons to earn a small living. In 1796 Louis-Philippe agreed to go to the United States in return for the Directory releasing his mother and his brothers. Four years later in 1800 Louis-Philippe arrived in England as a guest of the British government and he was given a small pension by the British, but he continued to refuse to serve against France. One of his brothers, the Duke of Montpensier, died in 1807, and when his second brother the Duke of Beaujolais fell ill Louis-Philippe took him to Malta for his health. Next he traveled to Sicily where in 1809 he married Marie-Amélie the daughter of Ferdinand IV, the King of the Two Sicilies. Louis-Philippe and his new wife resided in Palermo where they remained until the restoration of the Bourbon monarchy by the Coalition powers in 1814.

The restored King Louis XVIII welcomed Louis-Philippe back to France, naming him a Knight of Saint Louis and colonel general of hussars. When Napoleon escaped Elba in 1815 and marched back to Paris without a shot fired, Louis-Philippe accompanied the king in his departure to Belgium and afterwards he traveled to Lille and then back to England. After Napoleon's second abdication and the Second Restoration of the Bourbon monarchy, Louis-Philippe again returned to France.

Due to his lineage, Louis-Philippe entered politics and became known as a leader of the liberal party. When the people rose up in the July Revolution of 1830, Charles X abdicated the throne in favor of his grandson, but the Chamber of Deputies selected Louis-Philippe as King of the French. Louis-Philippe accepted his new role and became known as the Citizen King, and he supported the recognition of the achievements of the First French Empire. During his reign he ordered the completion of the Arc de Triomphe, oversaw the rehabilitation of many of Napoleon's soldiers who had been out of favor since 1815, and in 1840 he supported the solemn return of Napoleon's remains from Saint Helena to Les Invalides.

By 1848 Louis-Philippe was no longer held in such high regard and leading figures of the time had begun to move politically against him. Fearing another revolution, he abdicated that February and then returned to England where he took up the name of the Count of Neuilly. He and his family resided at Claremont where he died only a few years later.