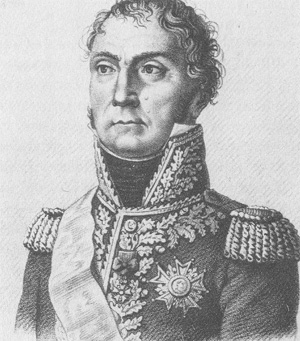 After enlisting in the King's Regiment of Cuirassiers in 1782, Joseph Souham obtained a leave from the army four years later. After the onset of the Revolution he returned to the army when he was elected a lieutenant colonel in the 2nd Battalion of Volunteers of Corrèze in 1792. Less than a year later Souham was promoted to général de brigade and employed in the Army of the North. During his time in the Army of the North Souham met and began working closely with General Moreau. In August of 1793 Souham became commander at Dunkirk and the next month he was promoted to général de division. That October he was sent to the Sambre and took command of the camp of Madeleine before taking Menin.

In 1794 General Souham took command of the 1st Division of the Army of the North and seized Courtrai before winning at Mouscron. In May he fought at Courtrai, Tourcoing , and Pont-à-Chin. That June Souham covered the siege of Ypres and defeated Clerfayt at Deynze. The next month he assumed command of the 3rd Division but then in September he was arrested by order of the representatives of the people. Souham was released shortly afterwards and he took command of the 1st Division and began to direct the siege of Nimègue before quitting his command in mid November.

During the years of peace that followed, Souham was suspected of having royalist sympathies and he was put on non-activity in 1801. In 1802 he was employed in the 20th military division at Périgueux, but then in 1804 when General Moreau was arrested Souham was also arrested due to his close association with Moreau. Souham was conducted to the prison of l'Abbaye in Paris and held for 40 days before being released. Despite his release, he remained unemployed with the army.

Souham waited three years before he was given the opportunity to serve in the French army again. In 1807 he was sent to Italy to command a French division there, and then in 1808 he traveled to Catalonia to command the 2nd Division of Gouvion St. Cyr's corps. That December he fought at Cardeheu and Molins del Rey. The next year Souham fought at Valls, seized Réus, served at the Siege of Gerona, and won at Santa-Coloma and Besalù. In 1810 he occupied Vich and defeated O'Donnell but was also wounded by a shot to the left forehead, forcing him to return to France to recover. Souham was then rewarded as a Count of the Empire. After recovering, in November he went to the Army of Italy, and then in March of 1811 he joined the Army of Germany. Five months later Souham and his division joined the Army of the North of Spain.

Back in the Peninsula, General Souham commanded a division but he was on leave in France during the Battle of Salamanca. After he returned to Spain, he temporarily assumed command of the Army of the Portugal in October due to Marshal Marmont's injuries. He won at Villa Muriel and took Valladolid, but he was then relieved of his command and he returned to France in November.

During the campaigns of 1813 in Germany, Souham led the 8th Division of Marshal Ney's III Corps. At this time he was also awarded the Grand Cross of the Order of the Reunion. In April Souham seized Weimar and won at Weissenfels and then in May he fought at Rippach, was wounded at Lützen, and went on to fight at Bautzen. That August he took command of III Corps and fought at Katzbach, and then in October he fought at the Battle of Leipzig where he was wounded in the head by a shell explosion.

Souham finally recovered enough to return to command in March of 1814 when he took command of a division defending Paris. After Napoleon's abdication in April, the Bourbons made him a Knight of Saint-Louis. When in 1815 Napoleon returned from Elba and resumed power during the Hundred Days, Souham did not rally to him.