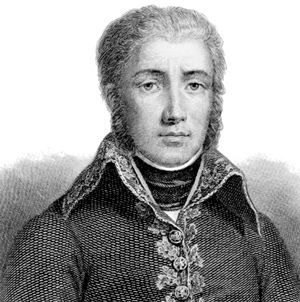 Jean-Victor Moreau was one of the more successful French generals of the Revolution but ultimately ended up serving against his nation. The son of a lawyer, Moreau was pushed by his father to become a lawyer and therefore studied law at Rennes. He left the school and joined the army but his father tracked him down and paid to release him from military service. Next he returned to the law school in Rennes, where he became provost of students.

In 1789, Moreau formed a company of cannoniers of the National Guard of Rennes and was made captain of this company. In September of 1791, he was elected lieutenant colonel of the 1st Battalion of Volunteers of Ille-et-Vilaine. In 1792 his unit was initially sent to the Army of the North to serve under General Dumouriez, and then later they served under Champmorin. In February of 1793 Moreau and his men seized the fort of Stephenswerth, and then the next month he distinguished himself at Neerwinden . At the end of the year he was promoted to général de brigade by the representatives of the people.

In 1794, Moreau was sent to assist General Pichegru who commanded the Army of the North. That April he was promoted to général de division and given command of the 2nd Division at Cassel. Later that month Moreau led his division and fought at Mouscron and took Menin, and then in May he fought at Tourcoing and Pont-à-Chin. Over the next months he and his men seized Ypres, Ostoende, Nieuport, the fort of l'Ecluse, Ruremonde, and Venloo. That summer his father was guillotined for sending money to émigrés, despite Moreau's contributions to the army.1 In the fall when General Pichegru fell ill, Moreau temporarily took command of the Army of the North for two months.

March of 1795 saw General Moreau being named commander of the Army of the North. A year later he was named commander-in-chief of the Army of the Rhine and Moselle, and with that appointment he left the Army of the North. Taking command of his new army in April, Moreau led a campaign against the Austrian Army under Archduke Charles. In June his forces crossed the Rhine and seized the fort of Kehl. The next month they won at Rastadt and then Ettlingen, and then in August at Neresheim and Friedberg. In September, due to General Jourdan's defeat, Moreau was forced to strategically retreat with the Army of the Rhine and Moselle. While his forces fell back, they won at Biberach in October and crossed the Val River, but then were defeated at Emmendingen. Finally he won at Schliengen and then crossed the Rhine, taking up defensive positions.

In April of 1797, Moreau began a new offensive, crossing the Rhine but then stopping at Offenbourg due to the preliminary treaties of Leoben that came about due to Napoleon Bonaparte's successes in Italy. In the meantime some of his men captured letters between General Pichegru and the émigré forces. Moreau read through the letters but did not report them to the government. When Pichegru was to be exiled for treason, Moreau suddenly produced the letters and denounced Pichegru as a traitor. The Directory was not pleased, summoning him to Paris and forcibly retiring him.

Moreau lived in retirement for a year, but his skills were too good to be ignored, and in September of 1798 he was called up to be the inspector general of infantry of the Army of Italy. That December he was given command of a corps of four divisions, and then the following March he commanded three divisions at Pastrengo. In April Moreau fought at Magnango, took command of the Army of Italy, but was then defeated at Cassano. He then made up for that last by winning at San-Giuliano in June. The next month, Moreau was selected to become the commander of the Army of Rhine, but he stayed with the Army of Italy until General Joubert could arrive in August to take command there. Joubert arrived in Italy and Moreau stayed on as the deputy commander, but within two weeks they fought at the Battle of Novi , where Joubert was killed in the opening moves. Moreau assumed command and still lost the battle, but remained in command until September. Afterwards, he returned to Paris in October and met with General Bonaparte when Bonaparte returned early from the expedition to Egypt. Moreau agreed to participate in the coup that brought Napoleon and the Consulate to power, and helped by detaining Directors Gohier and Moulin at the Luxembourg Palace during the coup.

First Consul Bonaparte rewarded Moreau and his skills by making him commander of the Armies of the Rhine and Switzerland. He then also gave Moreau a pair of pistols with the names of Moreau's victories on them. Moreau took up his command in December, and then in April of 1800 he began a new campaign. In May he defeated Kray at Engen, then went on to win at Messkirch, Biberach, and Memmingen. That June Moreau won at Hochstaed and then occupied Bavaria before signing the armistice of Parsdorf in July. Hostilities were renewed in September, but then further negotiations were attempted, so he returned to Paris in October.

Back in Paris, Moreau married Mademoiselle Hulot, a friend of Josephine. On November 19, when it appeared that peace negotiations would be unsuccessful, Moreau left to rejoin the army at Augsbourg. The Austrians launched an attack on his forces, and his army fell back to Hohenlinden to make a stand. Despite the bad weather, the French under Moreau's leadership won a great victory at Hohenlinden on December 3rd. Moreau sent his army after the retreating Austrians, and finally the Archduke Charles agreed to sign an armistice on Christmas Day.

Moreau quit his command the next year and returned to Paris, but he began to resent Napoleon's popularity and government. His wife hosted a social circle of individuals dissatisfied with the Consulate, and the group began to be known as the "Moreau Club". At one such party, Moreau announced he was naming his cook as a "Knight of the Casserole of Honor", deliberately mocking Napoleon's Legion of Honor, an award that Moreau had been awarded and refused to accept.2 Meanwhile Pichegru had secretly returned to France with Georges Cadoudal to assassinate Napoleon and establish a Bourbon monarch on the throne. Pichegru, having worked extensively with Moreau during the Revolution and knowing of Moreau's resentment towards Napoleon, approached Moreau to gain his assistance in the plot. Moreau felt no love for Napoleon, but he also did not want a return of the Bourbons, so he refused to join the plot. However, much like when he uncovered Pichegru's treachery years before, he did not report his knowledge of the plot to anyone. Once the plot was uncovered by the police and the conspirators arrested, Moreau's indirect involvement was discovered. He was put on trial and found guilty and sentenced to two years of prison. Napoleon instead intervened and gave exile as a punishment, and Moreau chose to go live in the United States in Morrisville, New Jersey.

Moreau lived in the US for a number of years, but after Napoleon's disastrous campaign in Russia in 1812, the Tsar Alexander and former Marshal Bernadotte invited Moreau to join the allied powers against France. Moreau agreed and arrived in Prague on August 17th, 1813. He accompanied the command staff of the Allied armies to Battle of Dresden. During that battle, while talking with the Tsar, he was struck by a ball that shattered his right knee, went through his horse, and destroyed his left leg below the knee. Badly wounded, Moreau smoked a cigar while both of his legs were amputated, and he was transported to Louny. His last words were, "Rest easy, gentlemen, it's my destiny", implying his death was justice for his decision to join the allies against France.3 For his part, Tsar Alexander had Moreau's body transported to St. Petersburg and buried at the Catholic Church there, and he gave Moreau's wife a Russian pension.