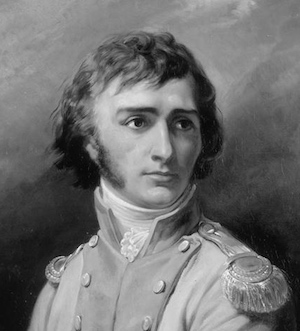 General Joubert was best known for his accomplishments during the first Italian campaign under General Bonaparte. His military career began in 1784 when at the age of 15 he ran away from school and enlisted in an artillery regiment. Six months later his father had arranged for him to leave the military, and he went back to school. In 1789, Joubert rejoined the military by joining the National Guard as a sergeant.

With the Revolution in full swing, in September of 1791 Joubert joined the 3rd Battalion of Volunteers of Ain. At the beginning of 1792, he was promoted to sous-lieutenant and served with the 51st Regiment of Infantry. Sent to the Army of Italy, he would spend most of the rest of his career serving in that theater. In November of that year Joubert was promoted to lieutenant, and then during the spring of the next year he served with a battalion of grenadiers and fought at the action of Isola. That September, when ordered to defend a redoubt, he courageously fought off the enemy until being wounded and taken prisoner. Transported to Turin as a prisoner, he was released by the end of the year.

The following spring of 1796 was Joubert's time to shine as General Bonaparte took command of the Army of Italy. After fighting at Montenotte and Millesimo, he was wounded by a blow from a stone during the attack on the chateau of Cossaria. Nevertheless, he continued to serve and fought at Mondovi before taking command of the 1st Brigade of Masséna's division. He fought at Lodi and then in June pushed his way to Verona leading Masséna's advance guard. In July Joubert was victorious at Bocchetta di Campion, but he was later forced to retreat when attacked at Corona by Wurmser. In early August he served under Augereau and took part in the fierce fighting at Castiglione .

Two months later in October, Joubert took command at Porto Legnago, and the next month he and his men forced the Austrian forces to collapse near the heights of Campara. After taking command of Vaubois' division, he was promoted to général de division. On January 12th, 1797, Joubert contained Alvinczy, but the next day was forced to fall back from his position, taking up a new position on the plateau of Rivoli and setting the stage for the famous battle that would begin the next day. During the Battle of Rivoli , Joubert distinguished himself and then began the pursuit once the French forces were victorious.

For the next few months, Joubert took command of multiple divisions and advanced deeper into the Tyrol, seizing key strategic objectives. In April he rejoined General Bonaparte and assisted in the negotiations at Léoben. That June he took command of the 5th Division of the Army of Italy, and then in December he returned to Paris on leave and to present captured flags to the Directory.

By June of 1799, Joubert was commanding the 17th military division in Paris and around this time he married Mademoiselle de Sémonville. Due to his popularity with both the people and the army, Director Sieyès considered Joubert the best available general to bring in army support of a coup d'état against the Directory.1 Joubert was willing to support the coup, and complained, "They lose time in words. When they like, I will finish it all with twenty grenadiers."2

The next month, General Joubert was sent to take command of the Army of Italy, and he finally arrived and took command on the 5th of August. On the 13th he attacked Bellegarde at Acqui, and then two days later he fought Suvarov at Novi . At the beginning of the Battle of Novi, Joubert was calling out to his men, "Soldiers, march to the enemy!" when he was struck by a ball in the heart, killing him instantly.3

His widow later remarried to Marshal Macdonald, and Director Sieyès instead looked to General Bonaparte to involve the army in the coup d'état.