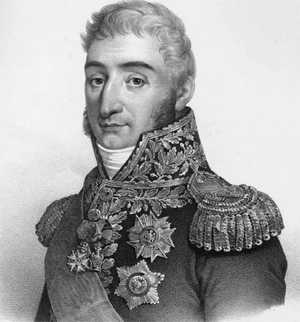 The son of a fruit merchant, Charles-Pierre-François Augereau first joined the French military at age 17 when he enlisted in the Irish Regiment of Clare in 1774. The next year he somehow purchased permission to leave or deserted and then joined a dragoon regiment which he remained with for two years. Augereau next traveled to Prussia where he joined the Prussian Army, serving in the regiment of Bevern-Brunswick against the Austrians and later the Turks. In 1784 he returned to France and joined the Bourgogne cavalry, where he served with the carabiniers. Two years later Baron Salis sent Augereau to Naples to serve as an instructor to the Neapolitan army where he served as a fencing master. While in Naples Augereau met and fell in love with Gabrielle Grach, and when her father refused to allow Augereau to marry his daughter, the two young lovebirds eloped and escaped to Portugal.

With the arrival of the French Revolution, Augereau and his wife felt pressure to leave Portugal and therefore returned to France in 1790. Once back in France, he joined the Parisian National Guard and by 1792 he was serving in the German Legion. Sent to stop the royalists in the Vendée, Augereau's unit fell apart to desertion and he was arrested and detained along with a young Lieutenant Marceau-Desgraviers. Released in June of 1793, Augereau was then promoted to capitaine in the 11th Hussars. A few months later he was named an aide-de-camp to General Rossignol, but he so disliked the position that within two weeks he had negotiated a transfer to the Army of the Eastern Pyrenees as a chef de brigade.

Once with the Army of the Eastern Pyrenees, Augereau put his past military experience to work, drilling and training the new recruits in efficiency and earning the nickname the "Big Prussian". In December of 1793 he was promoted to général de division and a few weeks later he received command of the advance guard. As the campaigning got underway in May of 1794, he led his men in seizing the bridge of Céret and Saint-Laurent de la Mouga, and then defeated the Spanish there. That August Augereau again fought at Saint-Laurent de la Mouga where he was wounded by multiple balls but nevertheless defeated the Spanish. In November of 1794, he served at the Battle of Montagne Noire and then laid siege to Figuières before covering the siege of Roses. The next year Augereau commanded the right wing at the Battle of the Fluvia, and after Spain sued for peace, he and his men were transferred to the Army of Italy.

Now serving with the Army of Italy, Augereau and his men distinguished themselves at the Battle of Loano in November of 1795. After General Bonaparte arrived to take command of the Army of Italy in March of 1796, Augereau supported him and received command of the 1st Division. That April he served at Montenotte, Millesimo, Cossaria, and Ceva before taking command of the 2nd Division. Augereau continued to fight, serving in May at Lodi and Peschiera and then in June at the suburbs of Mantua. That August Augereau was given the task of delaying one of the Austrian columns sent to relieve Mantua, and he won at Castiglione before then being joined by the rest of the army two days later and distinguishing himself at the Battle of Castiglione . In September he won at Primolano and served at Bassano before retaking Legnago. Augereau continued to serve notably in Italy, for in November he fought at Caldiero and Arcola and then in January of 1797 he won at Anghiari and served at La Favorite.

After the success of the campaign, Napoleon gave Augereau the honor of taking sixty captured flags back to the Directory in Paris. Over the years of campaigning he had gained quite the reputation for looting and one of the Directors called him a "proud bandit". In May of 1797 Augereau returned to the Army of Italy where he took command of the area around Verona and Venice. But by that July the Directory had grown nervous about the rise of royalists in the government, and they requested that General Bonaparte send the army to help them maintain control. Napoleon sent General Augereau with a force in response, and that September Augereau and his men provided the military muscle for the coup of 18 Fructidor that expelled and exiled the royalists from France.

With the crisis of power now resolved, the Directory decided to send Augereau to command the Army of Germany. His lack of discipline there upset many of the French officers under his command, and in February of 1798 his army was disbanded and sent to other units. Augereau was then sent to command the 10th military division at Perpignan, and in April of 1799 he was elected a deputy of Haute-Garonne in the Council of Five Hundred. When Napoleon seized power on the 18th Brumaire, Augereau initially opposed the coup but changed his mind upon realizing Napoleon's success.

Napoleon placed Augereau in charge of the French army in Holland in January of 1800. That December he won at Burg-Eberach before a peace treaty brought an end to the hostilities. For the next few years Augereau was largely unemployed, and he spent his time building his estate at Houssaye-en-Brie. By this time Augereau was rich and no longer considered the looter he had once been. When his friend General Lannes needed money, Augereau loaned him 300,000 francs without interest.

In 1803 Augereau was named commander of the camp of Bayonne, and in early 1804 he became commander of the camp of Brest. That May he was one of the original Marshals of the Empire created by Napoleon, and the next year he received the Grand Eagle of the Legion of Honor. When war broke out in 1805, the troops under Augereau became the VII Corps. Significantly farther behind the other corps of the army, Augereau's corps nevertheless took part in the campaign of 1805 by protecting the rear and he chased and took Austrian General Jellachich's surrender at Feldkirch in November.

In 1806 Marshal Augereau was still in charge of VII Corps for the Prussian campaign of that year. His wife died that August while he was away, but he had little time to grieve. That October he and his men marched against Prussia, and on the day before the Battle of Jena his men took a number of Prussian prisoners. Some of these prisoners belonged to his old company from his years in Prussian service, and Augereau invited his old captain and sergeant to dinner and gave them money. The next day he commanded the left at the Battle of Jena and afterwards took part in the pursuit of the Prussian army. That December he and his men won at Kolozomb and then fought at Golymin.

In February of 1807, Augereau fought at Ziegelhoff and then requested to be relieved of command due to an illness. His request was denied, and he was strapped into his saddle and tied a great scarf around his head for the Battle of Eylau. During that battle, his VII Corps advanced and a snowstorm descended upon them, causing them to lose their way and alter their path of march. Before long the VII Corps was caught in an artillery crossfire between the French and Russian guns as everyone struggled to see friends and enemies. VII Corps was nearly destroyed and Augereau himself was hit by a ball before his horse fell and took him down with it. Wounded and sick, after the battle Augereau was sent back to France to recover while the remnants of his destroyed corps were distributed to other units.

In 1808 Napoleon made Augereau the Duke of Castiglione in honor of his victory there back in 1796. That year he also met the young Adelaide-Josephine de Chavange and began a relationship, eventually marrying her in 1809. Augereau was finally fit for some service in the Danube campaign of 1809, and he took command of the VIII Corps and protected the army's rear. Next he was sent to the Army of Spain where he served until early 1810 when he was replaced by Marshal Macdonald.

For the Russian campaign of 1812, Augereau was again given a task of protecting the lines of communication and the rear of the Grande Armée. He was given command of the XI Corps in Germany and remained there throughout the campaign, ensuring the lines of communication between France and Russia. After the disastrous retreat of 1812, Augereau was named commander at Berlin in January of 1813, but in February he requested to return to France due to sickness. A brief respite followed but he returned to duty two months later as the Governor of Frankfurt. That June he took command of IX Corps and then in August he took command of the XVI Corps. Summoned to battle that October, he won at Naumburg and then fought at Leipzig where he held his own.

For the defense of France of 1814, Napoleon placed Augereau in charge of the Army of the Rhône at Lyon. However, Augereau did little during the campaign, avoiding fighting until he finally gave battle in March and was beaten at Saint-Georges and Limonest. Following those losses, he abandoned Lyon. After learning of Napoleon's abdication, Augereau issued a proclamation heaping abuse on Napoleon and urging his soldiers to serve the Bourbons. The returning Bourbons named him a Knight of Saint Louis and gave him command of a military division.

When Napoleon escaped from exile in 1815, Augereau proclaimed his support of Napoleon but Napoleon had not forgotten his actions of 1814. Napoleon struck Augereau from the list of marshals and thereafter did not pay attention to him. After Napoleon's second abdication, the returning Bourbons dismissed Augereau from service and he died the next year.