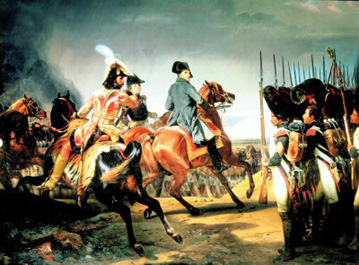 Prussia's predicted insulting ultimatum to France as a pretext for war had been delivered, and Napoleon wasted no time in responding, launching La Grande Armée into Prussia on the day the ultimatum's terms expired, October 8th. The quickness of the French maneuvers stunned the Prussian army, and after Marshal Lannes' V Corps was victorious at Saalfeld on the 10th of October, Napoleon began to suspect that the Prussians would either retreat to the north or attack Marshal Lannes' V Corps in force. When a messenger from Lannes reported a large enemy force in front of him at Jena, Napoleon immediately ordered a convergence of the army on Jena, with Davout's III Corps and Bernadotte's I Corps approaching from the north to cut that line of retreat.

The Prussian high command, still reeling from the quickness of the campaign, had actually decided to retreat to the northeast instead of attacking the French. What faced the French at Jena was a wing of the army under Prince Hohenlohe that had been ordered to cover the retreat of the rest of the army and then assume a rear guard duty. While Hohenlohe was aware of the French V Corps in front of him, he had no idea the rest of the French army was rapidly converging on his position in anticipation of a major battle.

Napoleon meanwhile was also unaware that the bulk of the Prussian army was falling back to the northeast straight towards Marshal Davout's III Corps, and at Jena they were only facing a contingent of the Prussian army. As he arrived at Jena, his presence was immediately felt when he saw the troops moving slowly to the commanding position atop the plateau overlooking Jena. After he issued new orders to clear the path and efficiently distribute the work to do so, troops and artillery began to reach the top much more quickly. Next he had his tent set up surrounded by the Imperial Guard atop the center of the plateau, and drafted orders for the coming battle. Napoleon's plan was fairly simple, a push up the center with V Corps while IV and VII Corps covered the flanks. The plan's primary goal was to push the Prussians back so the French could have enough room to fully deploy once the rest of the army arrived.

At six in the morning on the 14th, Lannes launched his attack under a fog, with Suchet's division advancing and easily seizing Closwitz while Gazan's division ran into resistance attempting to take Cospeda. Before long, Gazan's division was successful and the Prussians streamed back all along the center. In response, the commander of the Prussian advance guard, General Tauenzien, successfully rallied some of his men and launched a counterattack that halted the French advance. He then personally rode for Prince Hohenlohe, alarming the commander-in-chief enough that Hohenlohe dispatched an aide to immediately bring General Ruchel's corps to the battlefield from Weimar.

Meanwhile, on the French left Augereau's VII Corps advanced steadily without incident, while on the French right Saint Hilaire's division ran straight into the troops of General Holtzendorff. In a short matter of time Saint Hilaire had pushed the Prussians back behind the village of Nerkwitz, and they continued to fight until the entire Prussian unit collapsed, with most of the soldiers fleeing or being captured.


Back near the center, an unexpected surprise greeted both commanders. Moving through the fog and ignoring orders, Marshal Ney had moved his advance guard up through the gap between V and VII Corps and launched his small unit into the fray. His orders had been to await his corps' arrival and then support Lannes on the right, but impatient at a battle going on without him, he had instead decided to attack with only his advance guard at wherever he could find Prussians, which turned out to be on Lannes' left. Initially the attack was successful, surprising and pushing back the Prussians, and Ney continued to push forward. Unfortunately, since he was operating independently, he soon found himself far overextended into the enemy lines. The Prussians quickly took advantage of this, cutting him off from French support or the possibility of a retreat. Ney's troops formed square and attempted to hold out for relief.

By the time Ney was cut off, Napoleon had realized what was happening and reacted immediately. He ordered Bertrand to bring two cavalry regiments from the reserve forward, Augereau to adjust his advance to support Ney, and Lannes to break through and reach Ney. Lannes' troops charged through the village of Vierzehnheiligen but were met by fresh Prussians on the other side. As both sides exchanged fire, the French fell back into the village, using it as cover. Due to a failure of their commander, the Prussians stood out in the open and continued to exchange fire, but without cover it was now an uneven contest, and the Prussians suffered severe casualties. By this time some cavalry units had broken through to Ney, and he was able to fall back and reform at a safer position.

By one o'clock in the afternoon, Napoleon had roughly 54,000 soldiers engaged in battle and 42,000 more on the field in reserve. In contrast, Prince Hohenlohe had all of his 39,000 men engaged in battle except Tauenzien's advance guard that was attempting to rally and reform, and there was no sign of the 15,000 reinforcements of Ruchel's corps. Napoleon ordered the attack and the French surged forward, their superior numbers and morale easily breaking the Prussian line. Hohenlohe made a brief stand before realizing the inevitable and ordering a retreat, but the retreat soon degenerated into a rout as the French swarmed their positions. Finally Ruchel's men appeared on the road to Weimar and took a position to cover the retreat, but the momentum of the French attack soon overwhelmed and broke them too.

Napoleon believed he had defeated the entire Prussian army, capturing 15,000 prisoners and inflicting 10,000 casualties while only suffering 5,000 casualties to his own forces. What remained of the Prussian forces before him were barely able to outrun Murat's pursuing cavalry, and they now lacked cohesion and the will to fight. Exhausted, he returned to his tent on the plateau at Jena to find one of Marshal's Davout aides waiting for him with reports that Davout's III Corps had single-handedly defeated the Prussian army at Auerstadt.