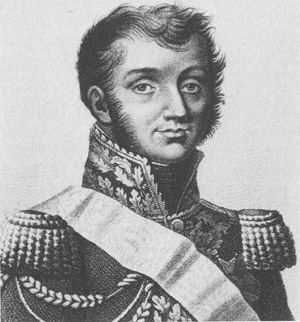 Loyal aide-de-camp to Napoleon who followed him into exile

Initially joining the National Guard during the Revolution, Henri-Gratien Bertrand served with the National Guard of Paris and took part in the fateful events of August 10th, 1792 when the Tuileries was stormed by a mob and the monarchy's power was abolished. Bertrand remained with the National Guard until September of 1793 when he was promoted to sous-lieutenant and began studying at the engineering school at Mézières. In November of 1794 Bertrand left the school as a lieutenant to serve in the Pyrenees. Before long he was promoted to capitaine and he served briefly with the Army of the North before being attached to the ambassador of Constantinople.

In 1797 Bertrand joined the Army of Italy and then in 1798 he traveled to Toulon to join the Army of the Orient. Taking part in the expedition to Egypt, he took command of the engineers of General Bon's division and then led them into action at the Battle of the Pyramids . A few weeks later he received a promotion to chef de bataillon. The next year during the Battle of Abukir Bertrand directed part of the siege, and during the fighting afterwards on the 27th he received a bad blow to the head. Dr. Larrey treated his wound, and later reported to General Bonaparte about Bertrand's courage and distinction in the fighting. Impressed, Bonaparte requested to meet Bertrand and the two's fates were linked until Napoleon's death in 1821.1 Following the victory at Abukir and the successful meeting with Napoleon, Bertrand received a promotion to chef de brigade and he was placed in charge of the engineers at Alexandria. Napoleon left the army in Egypt and Bertrand remained behind, but in the year 1800 he became deputy director of fortifications. After General Kléber's assassination Bertrand served on the commission that judged the assassin. Next he received a promotion to général de brigade he continued to serve in Egypt until the French surrender to British in 1801.

Back in France, in 1803 General Bertrand took command of the engineers at the Camp of Saint-Omer. The next year he became inspector general of engineers and an aide-de-camp to Napoleon. Before the Grande Armée moved east against France's continental enemies, Napoleon sent Bertrand undercover into enemy territory to gain intelligence on roads and bridges.2 Once he rejoined the army, he assisted in the capture of the bridges near Vienna and served at the Battle of Austerlitz.

In 1806 Bertrand continued to serve as an aide-de-camp to Napoleon. After Prussia declared war, Bertrand took part in the campaign and served at Jena and later attacked and took Spandau. After the winter campaigning and then halt in hostilities, Bertrand was sent in May of 1807 to serve under Marshal Lefebvre at the Siege of Danzig . For his service there, he received a promotion to général de division and he rejoined Napoleon in time to then serve at the Battle of Friedland in June. In 1808 Bertrand was created a Count of the Empire and he married Fanny Dillon, the daughter of General Dillon who had been executed during the Revolution.

Bertrand continued to serve in his role as aide to the Emperor, and in 1808 he followed Napoleon to Spain. When Napoleon returned to France to prepare for the impending Austrian attack, Bertrand accompanied him and then was given command of the engineers of the Army of Germany. Bertrand was kept quite busy throughout the campaign, for he restored the bridge at Burghausen and then served during the very brief siege of Vienna. Bertrand's next tasks were to oversee the construction of the bridges over the Danube for the battles of Aspern-Essling and Wagram . For his service, he was rewarded with the Grand Eagle of the Legion of Honor and the Grand Cross of Fidelity of Baden. Bertrand's next assignment was as Governor General of the Illyrian Provinces, replacing Marshal Marmont. He served in this capacity until the end of 1812, avoiding the disastrous Russian campaign.

In 1813 Bertrand took command of a corps in Italy that would become IV Corps of the reconstituted Grande Armée. Serving in Saxony, he led his men into battle and served at Lützen and Bautzen in May of 1813. That August he served under Marshal Oudinot at Gross-Beeren, and then in September he served under Marshal Ney at Dennewitz. In October Bertrand's corps took part in the Battle of Leipzig by guarding the bridges of Lindenau and then occupying the bridges of Weissenfels. During the retreat from Leipzig he served at the Battle of Hanau and covered the retreat until they reached Mainz. That November Bertrand replaced Caulaincourt as Grand Marshal of the Palace, who had been serving in that position temporarily since Duroc's death in May of 1813. Nonetheless he continued to command in battle, in 1814 fighting at Brienne, Champaubert , Montmirail , and Craonne. When Napoleon went into exile on the isle of Elba, Bertrand chose to accompany him into exile.

When Napoleon escaped Elba for his triumphant return to power in France for the Hundred Days, Bertrand was there alongside the emperor. Bertrand was made a Peer of France and he served as an aide-de-camp to Napoleon during the campaign in June and the Battle of Waterloo. Once Napoleon had decided to turn himself over to the mercy of the British, Bertrand again chose to accompany his emperor. As they sailed aboard the Bellerophon destined for exile, his wife Fanny threw a fit and tried to convince Napoleon to not accept Bertrand as one of the select few to accompany him to exile. When she realized that her pleading would do no good, she attempted to jump overboard. "Is she not mad?" Napoleon exclaimed while Bertrand caught his wife and restrained her from jumping overboard, and in due time she became more accepting of her fate.3

Bertrand was proscribed by the restored Bourbons, and in his absence a war council in France condemned him to die, but they had little power to reach him at St. Helena. Bertrand stayed by Napoleon's side until Napoleon's death in 1821, and he then returned to France later that year with the death sentence pardoned and his rank reinstated. When Napoleon's remains were to return to France in 1840, Bertrand traveled to St. Helena and accompanied the remains. After his death, Bertrand was buried near Napoleon's tomb at Les Invalides.