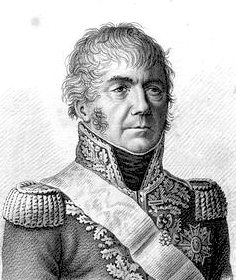 The son of a former soldier, François-Joseph Lefebvre was raised by his uncle after his father's death in 1763. After a stint working as a clerk for a prosecutor of Colmar, he enlisted in the French Guards in 1773. In 1782 Lefebvre was promoted to sergeant and the following year he married Catherine Hübscher, a washerwoman who would later be known as Madame Sans-Gênes for her blunt and unabashed personality.

By the time of the French Revolution Lefebvre had not risen higher in rank. On July 12, 1789, two days before the storming of the Bastille, Lefebvre was present as threatening crowds began to gather. Despite sympathizing with the Revolution, Lefebvre protected some of his officers from the crowd. Two months later he was promoted to lieutenant and named an instructor in the Battalion of Filles-Saint Thomas in the National Guard of Paris. When in 1791 the Royal family fled Paris but was caught at Varennes, Lefebvre and his men escorted them back to Paris, and he was slightly wounded while fulfilling this duty.

In 1792 Lefebvre was promoted to capitaine in the 13th Battalion of Light Infantry and sent to the Army of the Center which later became the Army of the Moselle. That year he served at Thionville and then the following year he fought at Arlon and was promoted to chef de bataillon. Lefebvre went on to fight at Kaiserslautern in November and was promoted to général de brigade by General Hoche in December. Continuing to fight, he served at Lembach and Geisberg later that month, and the next month he was promoted to général de division and took the fort of Vauban. March of 1794 saw Lefebvre given command of the advance guard, and in April he fought at Arlon before seizing Dinant in May. Next he took part in the siege of Charleroi and then fought at Fleurus where he and his men defended Lambusart and stood strong against the enemy before launching a decisive counterattack. The Army of the Moselle was reorganized into the Army of the Sambre and Meuse, and with them Lefebvre won at Bracquignies in July and then fought at Aldenhoven in October.

In 1795 General Lefebvre crossed the Rhine at Eichelkamp, defeated the Austrians at Honnef, but then was forced to fall back. In June of 1796 he fought at Siegsberg and Altenkirchen but was then beaten at Wetzlar before fighting at Uckerath. The next month Lefebvre won at Wildendorf and Friedberg before going on to serve at Bamberg, Salzbach, and Koenigshofen. For 1797 Lefebvre crossed the Rhine at Neuwied before learning of the preliminaries of the Peace of Leoben and then halting his advance. That September he temporarily assumed command of the Army of the Sambre and Meuse when General Hoche suddenly died.

Lefebvre next attempted to retire but his request was refused. He was however allowed on leave but he returned to the army in administrative positions. By 1799 though he was needed in a more active role again and he took command of the advance guard of the Army of the Danube. Lefebvre fought at Pfullendorf that March where he was badly wounded by a ball to the left arm. Now too injured to fight, he traveled to Paris. As Director Siéyès was contemplating a coup but needed the support of the army, he briefly considered General Lefebvre. Lefebvre's wife coyly remarked that the Directory must be in bad shape to even consider such a thing.1 Lefebvre was also considered as a possible Director to replace Treilhard but he was not selected, so instead he took command of the 17th military division at Paris. General Napoleon Bonaparte then returned from Egypt and began to plot with others to overthrow the Directory. Since Lefebvre commanded the troops at Paris, his support was essential. On the morning of 18 Brumaire, Napoleon invited Lefebvre to his home to gain his support, and after discussing the matter, Lefebvre told Napoleon, "Let us throw the lawyers into the river."2 After the coup's success and the establishment of the Consulate, Lefebvre's command was expanded to include the 14th and 15th military divisions.

In 1800 Lefebvre was appointed to the senate, and four years later at the establishment of the Empire he became a Marshal of the Empire. Due to his wound and age, he was considered one of the retired marshals, but he would later prove that he was fit for more than administrative positions. When an acquaintance remarked on the splendor of his new marshal's uniform, Lefebvre remarked that "It ought to be, I have been stitching on it for thirty-five years!"3 In 1805 Marshal Lefebvre received the Grand Eagle of the Legion of Honor and after war broke out that year he commanded a reserve corps formed of National Guard units.

In 1806, with the possibility of a war looming with Prussia, Lefebvre asked Napoleon for a more active command and therefore in October he received command of the infantry of the Imperial Guard. He served at Jena and then in January of 1807 he was given command of the X Corps and sent to lay siege to Danzig . Lefebvre left the siege planning to his engineering officers, but he led by personal example in the assaults and the fortress capitulated in May. In 1808 he was created the Duke of Danzig in recognition of this achievement.

Lefebvre's next command came in 1808 when he was appointed commander of the IV Corps of the Army of Spain. Aggressively seeking to fight the enemy, he won at Durango in October, then took Bilbao and Santander before winning at Guenes, Valmaceda, and Espinosa. However, these actions and aggressiveness did not follow Napoleon's orders and strategic vision, and Napoleon realized that independent command was beyond Lefebvre's capabilities and replaced him in January.

Lefebvre was given a new command in March of 1809, the VII Corps composed of Bavarian troops in Germany. When the Austrians invaded Bavaria, Lefebvre managed to hold his own until Napoleon could arrive on scene and outmaneuver the Austrians. That April Lefebvre won at Arnhofen and then fought at Abensberg, Schierling, and Eckmühl. The following month he was sent to the Tyrol but he was repulsed at Rastadt. Next Lefebvre defeated Jellachich and took Innsbruck before being ordered to bring his corps to join the main army for the Battle of Wagram .

After the conclusion of the campaign of 1809, Lefebvre retired to his estate for the next few years. In 1812 he returned to the army to take command of the infantry of the Old Guard for the campaign against Russia. He served at Borodino and then took part in the retreat. That December his son General Marie-Xavier-Joseph Lefebvre died during the retreat and Lefebvre requested to be relieved of command and returned to France.

Lefebvre did not take part in the campaigns of 1813, but when France was threatened in 1814 he returned to the army one last time. He took command of the Old Guard and despite his age he led from the front, fighting alongside his soldiers. He fought at Champaubert and Montmirail that February, but then in April he joined some of the other marshals in convincing Napoleon to abdicate. After Napoleon's abdication, Lefebvre went and met with Tsar Alexander to try and convince the tsar to keep Alsace as part of France. After that, the restored Bourbons named him a Peer of France. When Napoleon escaped from Elba in 1815 for the Hundred Days, Lefebvre supported him but did not actively participate.