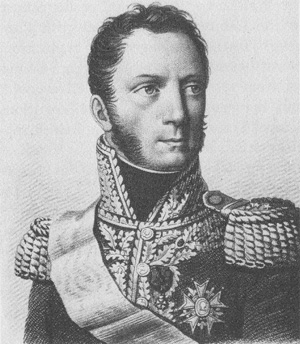 Aide-de-camp to Napoleon and notable ambassador to Moscow

The son of a senator and noble, Armand-Augustin-Louis de Caualaincourt would rise to prominence as an aide-de-camp to Napoleon and is most remembered for his service as ambassador to Russia throughout much of the period. His younger brother, Auguste-Jean-Gabriel de Caulaincourt, was a notable cavalry general who was unfortunately killed during the Battle of Borodino in Russia.

By the start of the Revolution, the young Caulaincourt was a sous-lieutenant. Before long his father was commanding in the army, and Caulaincourt became an aide-de-camp to his father, serving with the Army of the North. The 20th of May, 1792 saw Caulaincourt becoming an aide-de-camp to his uncle General Harville, but two days later he was arrested and dismissed from the army for his noble birth. Undeterred, the next month Caulaincourt enlisted and volunteered to join the Paris Guard, and the next year he fought at Cambrai with them. In early 1794 he joined the 16th Chasseurs à Cheval with the Army of the Coast of Cherbourg. In 1795 he was promoted to capitaine and became an aide-de-camp to Aubert-Dubayet, and then in December he was promoted to chef d'escadrons.

In early 1796, Aubert-Dubayet was sent as ambassador to Constantinople, and Caulaincourt followed him there, getting his first taste of foreign diplomacy. During the summer of 1797 Caulaincourt returned to France, this time assisting the Turkish ambassador to France. In late 1798 he rejoined the army in the 8th Cavalry with the Army of the Rhine. The next year he fought at Stockach and then in July was promoted to chef de brigade of the 2nd Carabiniers. That November Caulaincourt was wounded by two shots at Weinheim, but he was back in action the next year to fight at Messkirch and Neresheim.

Later in the year 1800, Caulaincourt was sent to Russia on a diplomatic mission. Upon his return in 1802, Napoleon made him an aide-de-camp, and in 1803 Napoleon promoted him to général de brigade. In March of 1804 Caulaincourt traveled to Strasbourg and was allegedly complicit in the arrest of the Duke of Enghien, though he would vehemently dispute any involvement in this event for the rest of his life. Made Master of Horse that year, the next year he was promoted to général de division and rewarded with the Grand Eagle of the Legion of Honor.

After serving throughout the campaigns of 1805 through 1807, Caulaincourt was sent as ambassador to Russia in November of 1807. The next year he was rewarded again by being made the Duke of Vicenza. Despite serving admirably as ambassador to Russia, he was recalled to France in 1811 when it became clear that the respective governments could not break their diplomatic impasse. As the expert on Russia, Caulaincourt was by Napoleon's side throughout the 1812 campaign. Caulaincourt repeatedly warned Napoleon of the dangers and risks of invading Russia, but to no avail.

Still by Napoleon's side at the Battle of Borodino, when word reached them of his brother's death, Caulaincourt maintained his composure despite the tears streaming down his face. Asked by Napoleon if he wished to retire, he raised his hat to acknowledge Napoleon's sympathy, but otherwise was silent and stayed by the Emperor's side.1 During the retreat from Russia, when Napoleon finally decided to leave the army and return to Paris, Napoleon traveled in disguise as Caulaincourt's secretary with a small escort.2

In 1813, General Caulaincourt became a senator and he represented France at many of the diplomatic negotiations of the year. After Duroc's unfortunate death, he also became Grand Marshal of the Palace temporarily until Bertrand fulfilled that position. Caulaincourt remained by Napoleon's side into 1814, and despite the hard campaigning that year Napoleon gave permission for Caulaincourt to marry his love.3 Meanwhile, Caulaincourt continued to be a principal negotiator with the Allies until the return of the Bourbons.

Unemployed by the Bourbons, when Napoleon returned from exile for the Hundred Days, Caulaincourt became Minister of Foreign Affairs, replacing Talleyrand. Made a Peer of France by Napoleon, after Napoleon abdicated a second time the Bourbons proscribed him for rejoining Napoleon. Due to his mutual friendship and respect with Tsar Alexander of Russia stemming from his days as ambassador, Caulaincourt was removed from the proscription lists by Alexander's command.4 He retired from public life immediately afterwards, and later wrote memoirs based on his daily notes.

Recommended Memoirs: With Napoleon in Russia by Armand de Caulaincourt.