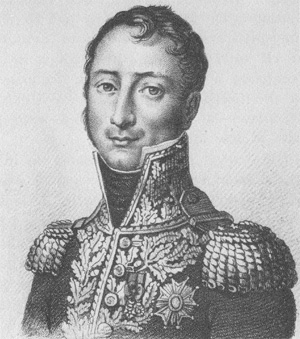 Général de division of cavalry who was killed at Borodino

The younger brother of Armand-Augustin-Louis Caulaincourt, Caulaincourt was a talented cavalry officer. Volunteering to join a cuirassier regiment in early 1792, he served in the Army of the Center and then the Army of the Moselle before going on leave in April of 1793. By 1795 Caulaincourt had returned to duty as a sous-lieutenant and aide-de-camp to General Aubert-Dubayet. Briefly serving with the Army of the Coasts of Cherbourg, in August he joined the 12th Dragoons, and then in January of the next year he was promoted to lieutenant in the 1st Carabiniers. Transferred to the Army of the Sambre and Meuse, Caulaincourt was promoted to capitaine with the 21st Dragoons in January of 1797. Around this time he entered combat at Vedoloago where he led 40 dragoons in capturing 400 enemy soldiers.

In 1801 Auguste Caulaincourt was promoted to chef de brigade with the 19th Dragoons. Later he served in garrison with the 16th military division until 1804 when he became aide-de-camp to Prince Louis Bonaparte. For the campaign of 1805, Caulaincourt served in Bourcier's 4th Dragoon Division and fought at Austerlitz, and afterwards he was rewarded as a Commander of the Legion of Honor on Christmas Day. The next year he passed to the service of the King of Holland, Louis Bonaparte, remaining as an aide-de-camp and promoted to major general. During this time he served as Master of Horse and in February of 1807 he was awarded a Grand Cross of the Order of Merit of Holland.

In early 1808, Caulaincourt returned to France as a général de brigade and joined a cavalry division forming at Poitiers. Made a Baron of the Empire, he was immediately sent to Spain, where in July he seized de Cuenca. That November he joined the general staff of the Army of the Spain before taking command of the 2nd Brigade of La Houssaye's dragoon division the next month. Over the coming months, General Caulaincourt served under Soult at Chaves and Braga, and fought at Oporto and Penafiel. He commanded the advance guard at Villamagna, in this capacity seizing Amaranthe, and then commanded the rearguard as the French evacuated Amaranthe in May. That September Caulaincourt received a promotion to général de division, and then in November he took command of five brigades of dragoons of the cavalry of VIII Corps.

In February of 1810, Caulaincourt returned to France due to ill health. That year he became a Count of the Empire, and the next year he received the Grand Cordon of the Order of the Reunion. For the Russian campaign of 1812, Caulaincourt was placed in charge of Napoleon's headquarters.

During the Battle of Borodino, after Montbrun's death Caulaincourt was summoned by Napoleon. Napoleon told him, "Go and take command of the First Cavalry Corps. Do as you did at Arzobispo." As Caulaincourt waited for Berthier to write down the order giving him command, he seized his brother's hand and told him, "With things this hot, I don't suppose I shall see you again. We shall win, or I shall get myself killed."1

Arriving at the front and finding Montbrun's aides in tears, Caulaincourt told them, "Follow me! Weep not for Montbrun, but come and avenge his death!" Murat ordered him to charge the Great Redoubt, and he responded, "You shall see me there, dead or alive."2 As he led the charge of the 5th Cuirassiers, he was killed by a cannonball.