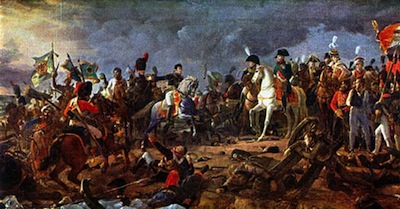 Unable to prevent the two Russian armies from linking up, Napoleon ordered La Grande Armée to fall back and selected an area near the town of Austerlitz to make a stand. Next Napoleon sent his aide Savary to negotiate an armistice and deceive the Allies into thinking that the French lacked confidence, and in the meantime his soldiers prepared defensive positions.

On December 1st, the Allied army arrived with many of its commanders excited about the possibility of destroying the French army. After heated discussions, the Austrian Chief of Staff General Weyrother's plan was accepted as the course of action. Seeing the overextended wing on the French right, General Buxhowden would launch a series of columns in force against that wing and turn it, rolling the French back northward. On the Allied right, General Bagration would press forward and hit the French from that side, while the center would hold steady and keep the two wings linked. The Russian Imperial Guard, commanded by the tsar's brother Constantine, would be held in reserve and respond where it was most needed.

On the other side, Napoleon was ecstatic when he saw the movements of the enemy army. He had purposely weakened and spread out his right flank in the hopes of enticing as many enemy units to that side of the battlefield as possible. Only Legrand's division of Soult's IV Corps formed the right, but Davout's III Corps was enduring forced marches to arrive at the battlefield by the next morning. Napoleon's plan called for the right flank to hold its ground as well as possible, forcing the Allies to commit more and more troops to that flank. Then, when the time was right and most of the Allied troops were engaged on one of the two wings, the other divisions of IV Corps would storm the Pratzen Heights in the center, smashing the Allied center and breaking their line. On the left, Lannes' V Corps supported by Murat's cavalry was ordered to not attack too forcefully to ensure the Allies would not send reinforcements to that side. Instead, Lannes was to contain Bagration, engaging his troops as much as necessary to ensure they could not interfere with the assault on the center. Bernadotte's I Corps would form up on the center left, able to assist with either the center or the left. Oudinot's grenadier division, temporarily commanded by both Duroc and Oudinot, and the Imperial Guard were held in reserve.

That night, as Napoleon rode among his troops, the French soldiers lit torches and shouted, "Vive l'Empereur!" despite having orders to not light torches and give away their positions. The fact that the battle would be fought on the anniversary of Napoleon's coronation was not lost on the soldiers, and morale was high after the impromptu procession.


On the morning of the 2nd, a thick fog initially covered the battlefield, conveniently assisting in hiding the French dispositions. At seven in the morning, the Allies launched their attacks against Tellnitz and Zoloknitz. Fighting back and forth, the villages changed hands over the next two hours, but by nine they were mostly in Allied control.

However, at eight the mist had begun to rise and Napoleon spied the Allied troops moving towards the south. "How long will it take you to move your divisions to the top of the Pratzen Heights?" Napoleon asked Soult. "Less than twenty minutes, sire," was Soult's response, and so Napoleon waited another fifteen minutes before giving the order to attack. Once unleashed, Vandamme and St. Hilaire's divisions quickly moved up and assaulted the heights. Kutusov immediately noticed the movement and tried to reverse Kollowrat's column, but it was too late for enough troops to arrive to stem the French onslaught.

Meanwhile, on the French left, everything had been quiet until 9:30, when the scene exploded into action. The soldiers under Lannes and Bagration exchanged attacks, and then Lichtenstein's cavalry moved in to decide the affair. Murat saw an opportunity and charged, and when the French cuirassiers slammed into the Allied cavalry, the sound of the impact was heard across the entire battle. The French V Corps continued to push forward, slowly but surely taking more ground and forcing the Allied line back. While the Allied line did not break, Bagration was nearly cut off from the Allied center by the forward movement of Lannes and Murat.

Back in the center, St. Hilaire's division endured attacks on three sides but managed to hold the line together until Soult was able to rush artillery forward to support him. With that crisis averted, the Pratzen Heights were firmly in French hands. On the right, earlier in the morning Napoleon had sent Oudinot's grenadier division to support that flank. The right was soon in better shape as the Allied attacks stalled as the Allies awaited orders and shifted objectives to deal with the unexpected situation in the center.

With the situation going so well for the French, Napoleon decided to envelop and destroy Buxhowden's command of the Allied left. Ordering the French center to incline to the right and sever the Allied line, he then ordered Bernadotte to move and become the new French center. Grand Duke Constantine saw an opportunity for success with the French movement, and launched the Russian Imperial Guard into Vandamme's division. Two of Vandamme's battalions broke and fled, shouting "Vive l'Empereur!" but still running as their officers tried unsuccessfully to rally them. Napoleon responded by sending Bessières forward with the French Imperial Guard, and Bernadotte on his own initiative sent Drouet's division to attempt to stabilize the situation. Once the Russian Imperial Guard was pushed back, Napoleon sent his aide General Rapp to attack the Russian Imperial Guard with two squadrons of the Chasseurs of the Guards and one of the Mamelukes. In less than ten minutes the Russians broke with 500 dead and 200 taken prisoner, including the commander of the tsar's personal escort, Prince Repnine. As Rapp led the prisoners back to Napoleon, Napoleon remarked, "Many fine ladies of St. Petersburg will lament this day," and this scene was later commemorated in the famous painting of the battle.

By now the Allied center had ceased to exist and the left had become completely isolated. As the French surrounded and pushed forward against the Allied left, Przbysewski's command surrendered and half of Langeron's force was isolated and taken prisoner. Doctorov was pushed back against frozen lakes, and in desperation he ordered his men to save themselves, with them scattering across the lakes for safety. The weight of so much artillery and so many horses was already a dangerous combination on the ice, and then the French began to bombard the fleeing soldiers, with the cannonballs beginning to crack the ice and adding more weight. Needless to say the ice broke, and the Russian soldiers fell in. The water was not too deep, but some wounded drowned, and those caught in the water could only slowly extricate themselves while still being fired upon, leading to more surrenders.

General Bagration had since realized that the battle was hopelessly lost, and managed to retreat in good order. Since his command was the only part of the Allied army still in decent condition, he formed the rear guard and began to hurry away from the battlefield as quickly as possible.

Napoleon had won a decisive victory, and the legend of this victory would strike fear into his enemies for years to come. The French had lost 1305 killed, 6940 wounded, and 573 captured versus the Allies who had lost 11,000 Russians and 4000 Austrians killed or wounded, and 12,000 soldiers captured. The French also managed to take 180 cannons and 45 colors. The next day the Austrian kaiser asked for an armistice, and the Russians continued to retreat back to their own territory. In the next few days Davout's III Corps overtook the retreating Russians and only suspended their attack when a handwritten note from the Tsar Alexander stated that an armistice had been conducted with Napoleon. Davout was suspicious but allowed the Russians to retreat, and the tsar was able to escape French capture through this lie.

The Third Coalition had fallen apart, and only Great Britain remained actively opposed to France. Appreciating the sacrifices of his men, Napoleon adopted the children of all French soldiers killed at the battle, providing money and schools that would raise the children. In his victory bulletin to the troops, he opened with the words, "Soldiers! I am content with you."

Recommended Reading: Austerlitz: Napoleon and The Eagles of Europe by Ian Castle.