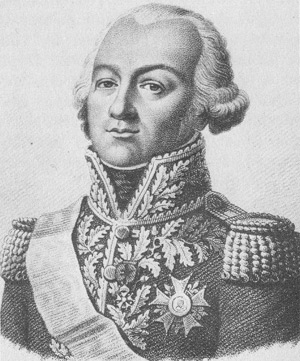 Legrand began a distinguished military career by enlisting in the infantry in 1777. Over the years he rose through the enlisted ranks, and in June of 1786 he took leave to marry. By 1790 he had joined the National Guard of Metz, and in March of 1792 he became a lieutenant colonel of the 4th Battalion of Volunteers of the Moselle.

1794 saw Legrand fighting in Championnet's division, serving at Arlon and Fleurus , before being transferred to the Army of the Sambre and Meuse. On September 4th of 1795, he led a cavalry brigade across the Rhine near Dusseldorf, and within two days Legrand had seized Dusseldorf and taken 2000 prisoners. The next year he fought at Neuwied and Wurzburg. Designated for the Army of England in early 1798, Legrand did not join the Egyptian campaign, instead being transferred to the Army of the Rhine and serving in Gouvion St. Cyr's division. With this division he fought at Pfullendorf and Stockach in March of 1799, and the next month he was promoted to général de division.

Joining the Army of the Lower Rhine in June, Legrand took command of the troops stationed on the right bank of the Rhine. Fighting at Renchen on July 4th, he was victorious and then distinguished himself at Offenbourg two days later, only to be driven back a few days after that. In November he was placed under Delaborde, and then in March of 1800 he commanded the 2nd Division of Sainte-Suzanne's corps in the Army of Germany. With this corps, he fought at Erbach and Delmensingen, and continued to serve after Richepanse took charge of the corps. After fighting at Ampfing under Grenier, Legrand went on to fight at Hohenlinden at the end of the year.

Administrative posts followed, as Legrand was appointed to command the 27th Military Division at Turin in July of 1801, and then was created inspector general of infantry in March of 1803. In August of that year he took command of the 3rd Division of the camp of Saint-Omer, which was to later become Marshal Soult's IV Corps.

As part of Soult's IV Corps in 1805, Legrand led his division into battle at Wertingen and Hollabrunn, and at Austerlitz he supported the efforts against the Russian left wing. For his exceptional service, he was created a Grand Eagle of the Legion of Honor at the beginning of 1806. Continuing to command a division in IV Corps, Legrand fought at Jena and Lubeck, and then in the next year fought at Bergfried, Eylau, Heilsberg, and distinguished himself at Koenigsberg on the same day as the Battle of Friedland.

In 1808 Legrand was created a Count of the Empire, and he commanded his faithful division on the Rhine. As Austrian hostilities became apparent in early 1809, his division became the 1st Division of Masséna's IV Corps. After fighting at Ebersberg in early May, he also led his men into fighting at Aspern-Essling . The next month Legrand fought at Wagram and Znaim, and in November became interim commander of IV Corps.

A few years later, in the buildup to the Russian campaign, he continued to command his division and also served as inspector general of infantry again. 1812 began with another honor for Legrand as he was given a Grand Cross of the Military Order of Charles-Frédéric of Baden. As the Russian campaign got underway, Legrand's division was designated the 6th Division of Oudinot's II Corps, with which he fought at Jaoukowo, Oboiaszina, and Polotsk. After the newly appointed Marshal Gouvion Saint Cyr was wounded in October, Legrand assumed temporary command of II Corps until Oudinot returned. Leading his division into action, he fought bravely at the crossing of the Berezina but was gravely wounded and never fully recovered.

Legrand returned to France to recover, and in April of 1813 he became a senator. In January of 1814, he served under Augereau and organized the defense of Chalon-sur-Saône, repulsing attacks until he was finally driven out by superior numbers. Still suffering from his wounds received at the Battle of the Berezina, Legrand finally succumbed to them the next year.