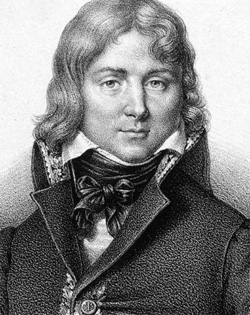 Army commander during the Revolution who served in Germany and Italy

Jean-Etienne Championnet was a distinguished general who unfortunately died before reaping any rewards for his work. The son of Madeleine Vachier, he had no idea who his father was and so took to calling himself Championnet.1 His military career began in the royal army, and he took part in the Siege of Gibraltar in 1782. By 1789 he was a grenadier in the National Guard of Valence, and less than a year later he was a lieutenant. In September of 1792 Championnet was elected a lieutenant colonel of the 6th Batallion of Volunteers of Drôme, and before long his unit was with the Army of the Moselle.

1793 was quite the year for Championnet, as he fought at Kaiserslautern, Brumpt, Bischwiller, and Haguenau. In December he took command of a detached corps of the army, and with this force he relieved Landau and occupied both Spire and Worms. In February of the next year, he was promoted to général de brigade, and the next month he was selected to replace Taponier in command of a division in the left wing under Hatry. After fighting at Arlon in April, Championnet received a promotion to général de division in June, and that same month fought at Chapelle d'Herlaymont and Fleurus .

Continuing to command a division in the Army of the Moselle, Championnet served at the fighting of Aldenhoven, and later took Juliers and Cologne. By May of 1795 he was under Kléber, and in September he took part in taking Dusseldorf. 1796 saw Championnet serving at the passage of the Rhine at Neuwied, victorious at Camberg, besiesing the fort at Koenigstein, and fighting at Amberg and Wurzburg.

At the end of January of 1797, he became interim commander of the Army of the Moselle for a week, and then Moreau extended his tenure to the 25th of February. After the 25th, Championnet assumed command of the right wing of the army, and in April again covered the crossing of the Rhine at Neuwied and won a victory at Steinberg. The next month he returned to a divisional command, taking charge of the 4th Division. That December he took command of the 3rd Division of the Army of Mainz, and in January of 1798 he was designated commander of the right wing of the Army of England.

Instead of going to Egypt, Championnet went back to the Army of Mainz to command a division of the advance guard in August. In October, he was named commander-in-chief of the Army of Rome, replacing Gouvion St. Cyr, but he did not take up this command until November. January of 1799 showed the world his skillful abilities, as he was forced to evacuate Rome with his army. Wasting no time, Championnet won the battle of Civita Castellana and re-entered Rome, then went on to take Capua and Naples. Named commander-in-chief of the Army of Naples, he quit his command in February, and then was arrested in March. Charges were brought against him including disobeying the orders of the government and seizing the public funds of Naples, but these were possibly political moves against him by his enemies, including General Macdonald. By July a military tribunal had acquitted him of all charges and he was named commander-in-chief of the Army of the Alps, under Joubert's overall command of the campaign.

After Joubert's death at Novi , Championnet was named commander of the Army of Italy, and then in September he took command of the left wing of this army. With this force he took Suze, and after arriving at Genoa he took command of the army from Moreau. That November he was overcome at Genola, and in December he fell gravely ill, quitting his command on the 30th. As the epidemic raged through his army, his condition deteriorated and he died on the 9th of January. At his death, he was so poor that there were no funds for his funeral, and his staff had to pool funds to give him a modest funeral.2