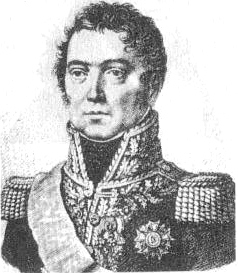 Général de division and corps commander who distinguished himself in Italy

Paul Grenier was an experienced soldier, first enlisting in the infantry regiment of Nassau in 1784. He became a sergeant in 1789, and once the Revolutionary Wars got underway, he joined the Army of the Center. Promoted to lieutenant in the summer of 1792, that autumn he went on to fight at Valmy and Jemappes with the Army of the North and then received a promotion to capitaine. The next year Grenier fought at Hondschoote and Wattignies before receiving a promotion to chef de bataillon. Transferred to the Army of the Moselle, he then fought at Lembach in December where he was wounded in the thigh.

1794 saw Grenier promoted to chef de brigade in January, and then three months later receiving a promotion to général de brigade. During this time his younger brother Jean-Georges Grenier also joined him as an aide-de-camp. With his brother by his side, General Grenier took a command in Championnet's division and fought at Fleurus . He went on to serve with the Army of the Sambre and Meuse and then was promoted to général de division in October. In 1795 Grenier was placed under General Kléber's orders and given command of a division, and with them he served at the crossing of the Rhine at Urdingen in September.

In June of 1796 Grenier again crossed the Rhine and invested Ehrenbreistein. In July he crossed the Lahn and won at Friedberg, then in August he fought at Bamberg, Sulzbach, and Amberg. More fighting followed, with Grenier serving at Wurzburg and Giessen in September. Grenier continued to command a division in 1797, and again crossed the Rhine, this time at Neuwied that April. At the end of the year he joined the Army of Mainz.

Designated for the Army of England in 1798, Grenier instead went to the Army of Italy that August. The next year he fought at Pastrengo, Magnano, and Cassano before winning at Bassignano and San Guiliano. Next he served at Bocchetta and the blockade of Tortona before returning to France to Grenoble to organize reinforcements. After organizing the reinforcements, Grenier led them to Championnet's Army of the Alps. In September of 1799 Grenier was given command of the left wing of the Army of Italy, and afterwards he served on the Stura and at Mondovi. He occupied Savigliano where he fought General Ott in November, and then he retook the camp of San Dalmazzo. Next his forces were driven out of the fortified camp at Limogne and then he assumed defense of Argentiere and Tende.

At the start of June of the year 1800, General Grenier took command of the center corps of the Army of Germany. A few weeks later he defeated Austrian General Kray and seized Gunzbourg before crossing the Danube in July. When negotiations broke down, in November Grenier took command of the left corps of the Army of Germany. That December he fought at Ampfing where the French were pushed back and he was wounded by a shot. Despite this wound he fought at Hohenlinden two days later. After Hohenlinden, Grenier did not hold an active command for a number of years. In 1801 he became inspector general of infantry in Piedmont and Liguria. In 1805 he received command of the 3rd military division, then in 1806 he became governor of Mantua, and in 1807 he was rewarded as a Grand Officer of the Legion of Honor.

Grenier returned to an active command in April of 1809 when he took command of the 3rd Division of the Army of Italy. That month he served in the center at Sacile, and then at the end of the month he was given command of the center corps and won at Soave. The next month Grenier fought at Piave, San Daniele, Malborghetto, and San Michele. In June he took the bridge at Karako and fought at Raab , and then in July he fought at Wagram where he was wounded by a shot to the left hand. Two months later Grenier was rewarded with the Grand Eagle of the Legion of Honor and became a Count of the Empire.

In 1810 Grenier became inspector general of infantry of the Army of Italy, and later chief of staff to the Army of Naples under Murat. In 1811 he commanded a corps in southern Italy, and then in September of 1812 he was at Verona and given the 35th Division. He led this division to Prussia to reinforce the army that had been largely destroyed in Russia. His division joined XI Corps in February at Berlin, but then in March they evacuated Berlin and Grenier assumed temporary command of the corps since Marshal Macdonald was not present. Meanwhile Grenier fought at Nedlitz where he was wounded by a shot that broke his jaw, and then he returned command of the corps to Macdonald and resumed command of his division. At the end of April he seized Mersebourg, and then in May he took command of the Corps of Observation of the Adige. In June Eugene de Beauharnais took command of the corps with Grenier as his principal lieutenant. September saw Grenier winning at Feistriz and then receiving command of the left corps of the Army of Italy. The next few months he made a fighting withdrawal, fighting at Casoni, Bassano, Caldiera, and San Michele. In 1814 Grenier fought at Mincio, Borghetto, Salo, Guastalla, the crossing of the Taro, and Parma and was then rewarded as a Commander of the Iron Crown.

After Napoleon's abdication, Grenier was made commander-in-chief of the French troops in the Army of Italy. He received a further reward by being made a Knight of Saint Louis before returning to France in June where he was named inspector general of infantry at Toulon and Marseille. In January of 1815 he retired, and then during the Hundred Days he was elected vice president of the Chamber. That June he took command of the defense of Paris on the right bank of the Seine and was one of the five members of the provisional government. He retired again in January of 1816.