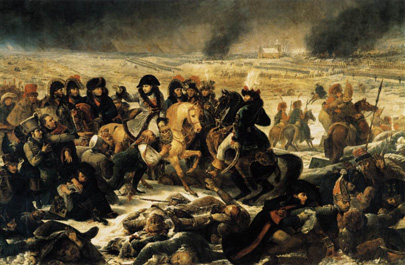 Napoleon had not intended to fight a campaign in the winter, but when Russian General Benningsen launched an offensive in January of 1807, Napoleon responded quickly. Marshal Bernadotte and his I Corps were ordered to fall back as bait for the Russians, drawing them further west while the rest of La Grande Armée moved up to cut off Benningsen's retreat and strike at his rear. Unfortunately for the French, a courier with Napoleon's plans was intercepted and Benningsen quickly realized the trap he was falling into. Benningsen immediately ordered the Russian army to fall back, and a chase was on as the French struggled to prevent his escape. As the French got closer and closer, Benningsen finally resolved to turn and fight with the main army at the village of Eylau on February 7th.

The troops of Marshal Soult's IV Corps were the first to run into the Russian rearguard at Eylau at two in the afternoon. As the Russians fought fiercely, control of the city passed back and forth between the two sides, and Marshal Murat committed his cavalry to help take the town. Finally at ten that night, the Russians relented and fell back and the town was in French hands.

At dawn the next day, snow had begun to fall and limited the visibility. The French army was at a serious disadvantage, with only roughly 45,000 troops and 200 artillery guns against the Russians' 67,000 troops and 460 artillery guns. But Napoleon had reinforcements on the way in the form of each wing of the army, Marshal Davout's III Corps as the right wing and Marshal Ney's VI Corps as the left wing. Napoleon's plan was to hold the Russians until these two corps arrived on each wing, then complete a pincer movement, surrounding the enemy on both sides.


The artillery opened the battle on the 8th as both sides launched cannonades to weaken their enemies. At nine in the morning, the Russian right began to attack, pushing the men of Leval's division back to Eylau. Meanwhile, the leading elements of Friant's division of the III Corps could be seen to the south, but they were struggling to make progress as the cavalry under Russian General Ostermann-Tolstoi held them at bay.

Napoleon decided to launch the VII Corps against the Russian left center to take the pressure off of Friant and ensure that III Corps could arrive and link up with the army. Commanding VII Corps was Marshal Augereau, who was quite sick and had actually requested to be relieved of command the previous day, but Napoleon had convinced him to remain in command for one more day. Augereau, with a scarf wrapped around his head, mounted his horse and ordered the VII Corps forward. Unfortunately for them, the weather had turned worse, with blizzard conditions ruining their ability to see very far. The brigades of VII Corps began to get separated and headed incorrectly off to the left, directly towards the Russian center where a battery of 70 artillery guns was waiting. When the Russian guns opened up on them, the VII Corps took significant casualties and ceased to function as a coherent unit. Benningsen sensed the opportunity and launched Doctorov's infantry reserve against the survivors of VII Corps, further destroying VII Corps. The few survivors of this onslaught fell back and tried to rally at at the cemetery of Eylau, but VII Corps as a fighting unit was gone.

In the meantime, the Russian right had continued to push towards Eylau, at one point actually reaching the streets of the city and threatening Napoleon himself before the Imperial Guard responded and pushed them back. Napoleon sensed the danger his army was in and turned to Murat, saying, "Well, are you going to let us be devoured by these people?" Murat dashed off to his Cavalry Reserve and shouted, "Follow me!" 80 squadrons of cavalry formed up with Murat for a legendary cavalry charge. First they charged through the Russians attacking Eylau, then split into two wings where one column charged through the forces attacking St. Hilaire's division and the other plowed into the troops who had just decimated the VII Corps. Nothing could slow them down, and both columns then charged into the Russian center, cutting a gap all the way through through the lines. Napoleon now saw the cavalry were in a dangerous situation, and ordered the cavalry of the Imperial Guard forward to further shock the Russians. Murat reformed the Cavalry Reserve into a single column and charged back through while the Imperial Guard Cavalry charged in and widened the gaps, wreaking havoc.

Napoleon could have sent all of the Imperial Guard into battle to further exploit the Russian confusion, but he held them back as a last reserve. No word had been received from Marshal Ney and the VI Corps, and Ney had been trying to prevent Prussian General Lestocq's corps from arriving at the battle. In fact, Ney had been chasing Lestocq in the wrong direction and only received orders to march for Eylau at two in the afternoon. Meanwhile, all three divisions of Davout's III Corps had arrived and began to push back the Russian left.

Late that afternoon, Davout had managed to make significant headway against the Russian left when suddenly he was stopped by the appearance of the fresh Prussian troops of Lestocq's corps. Lestocq had left a rearguard to delay Ney and then circled around behind the Russian lines, helping to rally some of the defeated Russians before plunging into battle with Davout. Before long, Davout's men were the ones falling back and the battle's outcome was once again in doubt.

Finally at seven that night Ney and his VI Corps appeared on the French left. Ney immediately launched his men into the attack, pushing back the Russian right and reinvigorating the French army. The fighting continued until ten that night, when darkness and exhaustion brought the battle to a close.

Both armies had suffered horrific casualties, and both contemplated withdrawing rather than continuing the fight the next day. Napoleon told Marshal Soult, "The Russians have done us great harm," to which Soult replied, "And we them, our bullets were not made of cotton." In the end, General Benningsen decided to withdraw, but Napoleon did not attempt to pursue him, instead content to return to winter quarters. Both sides claimed a victory, but from a strategic or political perspective nothing was gained by either side. The next day as Marshal Ney surveyed the battlefield, he summed up the events of the day before, "What a massacre! And without results."