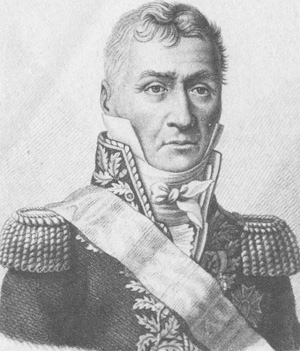 Louis Friant, best known for his service as an exceptional divisional commander under his brother-in-law Marshal Davout, embarked on a military career in 1781 when he joined the French guard. By the next year, he was a corporal of grenadiers, but in 1787 he left the army. With the Revolution in full swing, Friant returned to the army and was made a lieutenant colonel of the 9th Battalion of Paris in September of 1792.

Shortly thereafter Friant served in the Army of the Moselle, over the next few years fighting at Arlon and Kaiserslautern and being wounded in the left leg. In 1794 he fought at Fleurus , and the next month began fulfilling the functions of chief of staff for General Schérer. A month later, he was promoted to général de brigade, and a mere ten days after that he was commanding a division under Kléber. With this division he took part in the siege of Maestricht, and then the siege of Luxembourg the next year, afterwards becoming Governor of Luxembourg.

Designated for the Army of England in January of 1798, Friant joined the Egyptian expedition as part of Desaix's division, commanding the 2nd Brigade. Before he left, he married a sister of General Leclerc, therefore becoming related by marriage to both Leclerc and General Bonaparte. Once in Egypt, he led this brigade through many battles, including Chebreiss, the Battle of the Pyramids , Sédiman, Samanhout, Girgeh, Samatah, Aboumanah, and Souhama. In April of 1799, his leadership was recognized with a promotion to général de division. After Desaix left Egypt for his fateful return to France, Friant took command of Upper Egypt.

In this new position, Friant fought at Héliopolis in March of 1800, then at Belbeis, and finally marched to Cairo and helped put down the revolt there all in the same month. Later he was appointed Governor of Alexandria. Friant tried unsuccessfully to stop the British advance in March of 1801, and was overcome and pushed back at the combat of Lake Madieh. At the Battle of Canope he served on the right wing under Reynier, and in April he became Menou's second in command of all the French forces in Egypt.

At the end of 1801, Friant returned to France and became the inspector general of infantry. By this time General Davout had married one of Leclerc's sisters, and with Friant also being married to one of Leclerc's sisters, the two generals became brothers-in-law. In August of 1803, Friant was employed in the camp of Bruges, commanding a unit which was to become the 2nd Division of Davout's III Corps of the Grande Armée.

As war broke out, Friant led his division with distinction. Before Austerlitz, Friant pushed his division hard to ensure they would arrive at the battle on time, with the division marching more than 70 miles in 36 hours.1 During the battle he had three horses shot out from under him, and when he was ennobled later during the empire, he put three horse heads on his coat of arms to signify that. A few weeks after the battle, he was named a Grand Eagle of the Legion of Honor in recognition of his contributions.

The next year was also full of distinction for Friant, as he fought at Auerstadt with Davout against the numerically superior Prussian forces. He continued to fight in 1806, taking part in the battles of Nasielsk and Golymin that December. At Eylau, he was wounded by a shot to the right side, and in 1808 he was made a Count of the Empire.

Friant continued to serve under Davout, and during the Danube Campaign of 1809 he fought at Thann, Schierling, Eckmühl, and Ratisbon in April. Unable to fight at Aspern-Essling due to the bridge being out, he made up for it at Wagram , where he was hit in the right shoulder by a shell fragment.

In early 1812, Friant ocupied Swedish Pomerania before taking command of the 2nd Division of Davout's corps, now the I Corps. After Dorsenne's death, the Emperor named Friant Colonel Commander of the Grenadiers à Pied of the Old Guard as a replacement. Friant, despite being wounded in the attack on Smolensk , fought at Borodino where he received two more wounds.

After returning to France in January of 1813, he was finally separated from working with Davout. Taking command of the 4th Division of the Young Guard in Saxony in June, the next month he traded commands with General Roguet and took command of a division of the Old Guard. With this division he fought at Dresden and Hanau, and then was placed under Marshal Mortier's command for the defense of France. Leading the veterans of the Old Guard, he was victorious at Rouvré, and fought at Montmirail , Vauchamps , Craonne, Laon, Reims, and Arcis-sur-Aube.

The Bourbons did not treat Friant badly, but he did not hesitate to rejoin Napoleon, and Napoleon made him a peer of France. Again commanding a division of the Old Guard, Friant fought at Ligny and was wounded at Waterloo. A few months later, with the return of the Bourbons, he retired.