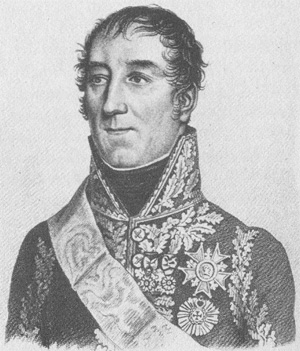 The optimistic, friendly, and tallest of Napoleon's marshals

The son of a cloth merchant and his English wife, Adolphe-Edouard-Casimir-Joseph Mortier spoke fluent English and had originally intended to become a merchant like his father. Mortier attended the English College of Douai and in 1789 his father became a deputy of Cambrésis to the Estates General. Now caught up in the Revolution, Mortier joined the National Guard of Dunkirk where he remained until 1791 when he joined the National Guard of Cateau. As an exceptionally tall and congenial man, he was elected capitaine in the 1st Battalion of Volunteers of Nord in September 1791.

Mortier's first combat came in April of 1792 when he served at Quiévrain, and later that year he fought at Jemappes and then Namur. 1793 turned out to be a busy year for him, for he fought at Maestricht, Neerwinden , and Pellenberg early in the year before being promoted to chef de bataillon in September. Less than a week later Mortier fought at Hondschoote and then in October he became the chief of staff to Balland's division and was wounded by grapeshot at Dourlers. Mortier was next offered a positions with the 21st Chasseurs à Cheval, but he refused, instead remaining as Balland's chief of staff. He continued to fight into 1794, serving at Fleurus before his division became part of the Army of the Sambre and Meuse.

With the Army of the Sambre and Meuse, Mortier went on in 1794 to serve at Mons, Brussels, the Battle of the Roer, Maestricht, and he then forced Fort Saint-Pierre to surrender. In June of 1795 he was promoted to chef de brigade and then in September he distinguished himself at the crossing of the Rhine at Neuwied and then fighting at Dietz. The spring of 1796 saw Mortier taking command of part of the advance guard under General Lefebvre. That May he defeated the Austrians at Acher and then the next month he served at Altenkirchen and forced a crossing of the Nidda. Continuing on the offensive, Mortier took 600 Austrians prisoner at Willendorf in July and then went on to fight at Griessen and Friedberg before negotiating the surrender of Frankfurt and taking Schweinfurt. When General Richepanse was wounded, Mortier took command of the cavalry and fought at Hirscheid. The following year Mortier was tasked to negotiate the surrender of Mainz, which he completed successfully and then returned to Paris and the Directory to deliver the terms of the agreement. The Directory wished to promote him to général de brigade, but Mortier refused the promotion.

1798 saw Mortier designated for the Army of England but then transferred to the Army of Mainz to serve as Lefebvre's chief of staff. That year he also found time to marry Ann-Eve Himmies at Koblenz. Their honeymoon in February of 1799 ended with the news that Mortier had been promoted to général de brigade. Now with the Army of the Danube, Mortier returned to campaigning and fought at Stockach that March. That April he was given command of a brigade in Legrand's division, and then in June he was placed in charge of a brigade of his friend General Soult's division. Mortier took command of the 4th Division in August and then led them into battle at Zurich where his division was mauled, but General Masséna promoted him to général de division on the battlefield for helping lead the Russians into the trap. He next took part in the pursuit of the Russians and was repulsed at Schywz before then winning at Rosemberg. That December Mortier took command of a division of the Army of the Rhine under Lecourbe.

In 1800 while Mortier was in Paris, the new First Consul, Napoleon Bonaparte, appointed Mortier commander at Paris of the 17th military division. Less than a week later, Napoleon added the 15th military division to Mortier's command. Mortier served in this capacity throughout the years of peace that followed until May of 1803. When England declared war that month, Mortier took command of a corps ordered to occupy Hanover. Mortier led his troops quickly on the offensive and successfully took the surrender of the Hanoverian Army in July. He next governed Hanover well until he was recalled to Paris in February of 1804. When the Empire was established, Mortier was one of the newly created Marshals of the Empire, and in 1805 he received the Grand Eagle of the Legion and became a Knight of the Order of Christ of Portugal.

When war broke out in 1805, Mortier was placed in charge of the infantry of the Imperial Guard. However, that November he was given command of a newly formed temporary corps and placed under Marshal Murat's orders. Following Murat's orders, Mortier found himself cut off from the army at the Battle of Dürenstein , but leading his troops they managed to cut their way out of the trap and reach reinforcements. Next Mortier's troops held Vienna until after the French victory at Austerlitz, and after Marshal Lannes left the army in anger Mortier assumed command of the V Corps.

In September of 1806 Marshal Mortier was recalled to Paris and then in October he was given command of the VIII Corps of the Grande Armée for the campaign against Prussia. After Napoleon's victory at Jena, Mortier successfully led his troops in conquering Hesse and Hanover and then occupying Cassel, Brême, and Hamburg. In 1807 he was ordered to lay siege to Stralsund but he was unable to take the fortress and was called elsewhere. Afterwards the Swedish troops broke out of Stralsund and Mortier hurried his troops back and won at Anklam. This victory led to a truce that let the French take Stralsund, and Mortier was next directed to lay siege to Colberg. After that, he led his men into action at the decisive Battle of Friedland where he commanded the left wing. Mortier's next command was to govern Silesia where he remained for a number of months with his family and in July of 1808 he was created the Duke of Treviso.

Mortier's next active campaign came in October of 1808 when he was summoned to Spain to command the V Corps. He covered the siege of Saragossa, ensuring that outside forces did not attempt to relieve the city. Later that year Mortier won at Licinena and then in August his troops fought at the bridge of Arzobispo inflicting a number of casualties on the Spanish. Three months later Mortier contributed to the decisive victory of Ocana where he was wounded slightly by grapeshot to the arm. In January of 1810 he took part in the conquest of Andalucia and then in February he summoned Badajoz to surrender but the defending Spanish refused. Not having enough reinforcements to the take the city, he abandoned plans for a siege and fell back. Later in September of 1810 Mortier and his troops won at Fuente de Cantos. In January of 1811 he and his men returned to Badajoz where they covered the siege while Marshal Soult's troops attempted to take the city. When a relief army approached in February, Mortier stopped them by winning the Battle of Gebora. After Badajoz fell, he was tasked with laying siege to Campo Mayor which he successfully took in March.

Mortier was recalled to France in May of 1811 to take command of the Young Guard. The next year he led them on the campaign against Russia. Mortier served at Borodino but Napoleon refused to commit the Imperial Guard to the battle, and Mortier saw little action. After the French arrived at Moscow, Mortier was appointed Governor of Moscow and therefore was in charge of preventing looting. When a number of Russians lit fire to the city, Mortier coordinated much of the effort to stop the fires. When the Grande Armée finally left Moscow in October, Mortier was ordered to destroy the Kremlin on the way out and he followed his orders. During the retreat that followed, Mortier's survivors of the Young Guard were finally employed in battle at Krasnoe where they held back the Russians, and then at the Berezina where they helped clear the way.

Mortier returned to France in February of 1813 and before long he was training a new division for the Young Guard. He took his men to Germany to take part in the campaigns there, fighting at Lutzen, Koenigswartha, Bautzen, Hochkirch, Wurschen, and Reichenbach in May. After the armistice during the summer, Mortier led the Young Guard into battle again at the Battle of Dresden. Two months later they fought again at the Battle of Leipzig , and the following month he took command of the Imperial Guard.

As France became threatened in 1814, Mortier took command of the Old Guard for the defense of France. He fought at Bar-sur-Aube in January and then Montmirail in February. That March Mortier won at Lizy-sur-Ourcq and then fought at Reims, Craonne, Laon, and Fère-Champenoise. Now he was forced to fall back, battling in retreat and then taking up the defense of Paris. In April Marshal Marmont took his troops over to the Allies and Napoleon abdicated, bringing an end to the campaigns of 1814.

Mortier was well treated by the Bourbons, becoming a Knight of Saint Louis and Peer of France before being given command of the 16th military division. In 1815 when Napoleon escaped from Elba for the Hundred Days, Mortier refused to act against the Bourbons until they had fled French soil, and then he rallied to Napoleon. Napoleon gave Mortier a mission to inspect the fortresses of the frontiers in May of 1815, and then in June he was given command of the cavalry of the Imperial Guard. Unfortunately, Mortier fell ill at Beaumont and was in so much pain that he was unable to even mount a horse. He reluctantly relinquished his command and therefore missed out on the campaign and the Battle of Waterloo.

The once again restored Bourbons removed Mortier's status as a Peer of France and ordered him to join the council of war to judge Marshal Ney. After that council declared itself incompetent, Ney was later tried in the Chamber of Peers. Mortier was elected to political office in the following years and in 1830 his old friend Louis Philippe, with whom he'd served alongside in 1792 and 1793, became the King of France. Louis Philippe appointed Mortier the ambassador to Russia for a few years. Once Mortier returned to Paris the king employed him in various positions in the government. In 1835 when the assassin Fieschi attempted to kill the king with the internal machine during a parade, Mortier and 17 others were killed by the blast while the king survived.