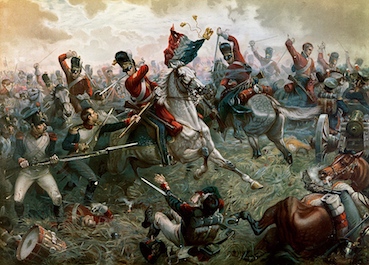 Napoleon had successfully driven a wedge between the British and Prussian armies, preventing them from linking up and crushing him with their combined numbers. After he defeated the Prussians at Ligny on June 16th, he sent Marshal Grouchy with the right wing of the army after the Prussians and turned his attention to the British Army.

The Duke of Wellington, commanding the British Army, had decided to hold a strong position around Mont St. Jean to give battle. Wellington's plan was simply to survive the onslaught of the French until the Prussians could arrive, and Field Marshal Blücher had personally promised Wellington that the Prussians would arrive in time to affect the battle. Wellington placed most of his forces along his center and right, leaving the left with less troops as the Prussians would approach from that direction. His men were placed along a ridge that enabled them both to hold the high ground and fall back behind the ridge to avoid the French artillery.

After Napoleon observed the British positions, he drew up a plan for attack. His brother Jerome's division would attack the Chateau of Hougoumont on the left as a diversion to draw more enemy troops to that sector, while the main attack would then be launched by I Corps straight up the center. Marshal Soult recommended that they recall Grouchy's wing to the battle immediately, but Napoleon rejected this suggestion. The Prussians had been soundly defeated only a few days earlier and Grouchy's wing was presumably occupied with the Prussians. Due to a heavy rain the night before, the ground was rather wet, and General Drouot recommended that they delay the start of the battle to allow the ground to dry out so the French artillery shots would bounce along the ground. Napoleon agreed to this suggestion, losing precious hours.

Field Marshal Blücher's Prussian forces had already set out to join with the British, and he left his chief of staff Gneisenau at Wavre with one corps to fight Grouchy's wing. Marshal Grouchy did not realize the Prussian movements, but when the thunder of the guns at Waterloo was heard, General Gérard proclaimed that they should immediately march for Waterloo. Grouchy rejected Gérard's suggestion, insisting his orders were to fight at Wavre. Most of the Prussian Army slipped away to do battle at Waterloo while the French right wing fought a token force at Wavre.

Back at Waterloo, Jerome launched his attacks on Hougoumont but was repeatedly thwarted by the the fierceness of the defending troops. Growing frustrated, he asked for help from the nearby divisions and more French troops became committed to taking the chateau. While the British were forced to commit more troops to the defense of the chateau, they committed less than a division while a large percentage of Reille's II Corps became embroiled in the struggle and were unable to take part elsewhere in the battle.

Despite waiting for the ground to dry out, the French artillery bombardment of the British center was rather ineffective due to most of the British troops being behind the ridge. Far in the distance to the east movement could be seen, and Napoleon incorrectly thought it was Grouchy coming to the battle after hearing the thunder of the guns. Sending a small cavalry detachment out, the French captured a Prussian courier who reported that it was General Bulow's corps approaching. At this point Napoleon could have withdrawn his forces and fallen back, but instead he decided to try and defeat the British before the Prussians could arrive in force. He ordered Mouton's VI Corps and Subervie's and Domon's cavalry divisions to the east to hold back the Prussians while the rest of the army assaulted the British. He also sent an order to Grouchy to march to Waterloo and attack the Prussians, but Grouchy would not receive this order in time to intervene.


At 1:30 in the afternoon Napoleon ordered Marshal Ney to begin the attack, and Drouet d'Erlon's I Corps moved forward. While the French initially experienced success, it was short-lived. Picton's 4000 men moved up to do battle and then Uxbridge led a charge into the French infantry, and before long, the French infantry were streaming back to safer positions. Unfortunately for Wellington, the British cavalry got carried away and continued charging after the French infantry and artillery. Napoleon watched and waited for the right moment and then sent his own cavalry into the disorganized British cavalry, decimating them.

By three in the afternoon Napoleon had received word that Grouchy would not be able to arrive, and he again had the opportunity to break off the battle and fall back, or continue to try and defeat the British before the Prussians could intervene. He continued to believe he could beat the British in time, and ordered Marshal Ney to seize the village of La Haie Sainte at any cost. Ney's initial attack at the head of the rallied troops of I Corps failed, but he noticed what he thought was a retreat of the British. Anxious to exploit this perceived weakness, he ordered Milhaud's cuirassiers to charge the enemy. Without orders, Lefebvre-Desnouëttes decided to follow the cuirassiers with his light cavalry. The French cavalry charged but the British formed square and received them and could not be broken. Meanwhile, the Prussians had arrived and taken Plancenoit. Napoleon ordered the Young Guard to retake Plancenoit and then sent Kellermann's and Flahaut de la Billarderie's cavalry to rescue Ney's cavalry.

Around six in the evening Napoleon ordered Ney to attack La Haie Sainte again. Ney led the troops forward and successfully seized the town this time, and with artillery in support he began a devastating fire on the British lines. Ney requested more troops to exploit the gap he had forced in the British lines, but Napoleon felt he had no troops to spare. The Young Guard had been driven out of Plancenoit by the Prussians, and Napoleon sent part of the Old Guard to retake it. The rest of the Imperial Guard formed a line to protect the right flank of the army. Nevertheless, even without more troops to exploit the gap, Ney's troops were wreaking havoc on the British positions. Wellington considered the situation critical and personally led his troops into battle to try and stabilize the situation, but help was at hand. General Zieten's Prussian corps was headed for his position and would be able to alleviate the pressure.

Once the situation at Plancenoit was under control, Napoleon ordered the available units of the Imperial Guard to attack the center and exploit Ney's gains. Drouot, Friant, and Ney led the Imperial Guard forward, but Wellington's troops were ready for them. As the Guard moved forward, they were halted and decimated by the Allied fire, and Wellington ordered a bayonet charge. Suddenly some units of the Imperial Guard broke and ran, and the French began to hesitate and fall back. Sensing the change in momentum, the Allies swept forward, and soon the French retreat turned into a rout with only a few units maintaining discipline and order on the retreat.

The Allies had won a great victory by joining their forces, only suffering about 25,000 casualties to the French's 43,500. However, when combined with the casualties suffered at Ligny and Quatre Bras, the French had lost approximately 60,000 men to the Allies' 55,000. The French were not entirely beaten, as Marshal Grouchy's wing took up the rearguard, delivering bloody checks to their pursuers while Marshal Soult rallied the army. The French could still field a capable fighting force and Napoleon still had the loyalty of many of the people of France.

However, after the French defeat at Waterloo the politicians in Paris in the Chamber of Representatives sensed an opportunity and demanded Napoleon's abdication. Marshal Davout, Napoleon's brother Lucien, and General Carnot urged Napoleon to assert his will over the government and declare a temporary dictatorship, but Napoleon refused to possibly bring violence and civil war back to Paris like during the Revolution. Instead he abdicated and a few weeks later turned himself over to the British hoping for a comfortable exile in England or the United States.