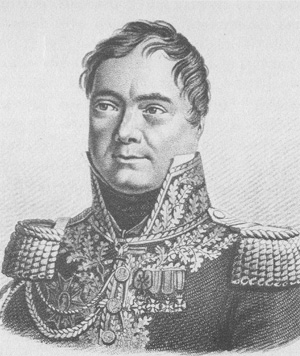 Aide-de-camp to Napoleon who distinguished himself at Aspern-Essling

In 1795 Mouton joined the Army of Italy, where he would serve for the next six years. During the Italian campaign, he participated in the siege of Mantua . 1797 was a big year for Mouton when he was promoted by General Bonaparte to chef de bataillon and later became an aide-de-camp to General Joubert. The next year Championnet placed him in charge of the Saint-Ange fort, and the following year he was promoted to chef de brigade and fought at Novi under Laboissière. At the end of the year, Mouton fought at Monte Faccio near Genoa and received a wound to the left shoulder. During the defense of Genoa he served in Gazan's division, and then covered the retreat and won glory in the fighting around the mountain of Hermette. At the attack on the fort of Quezzi, he was wounded when a ball passed through his right arm.

During the consular years, Mouton was appointed colonel to the 3rd Line Regiment, and then in 1805 he was promoted to général de brigade and appointed an aide-de-camp to the Emperor. As an aide, he assisted Napoleon by advising him on officers and promotions.1 But he also served notably in combat, fighting at Austerlitz, Jena, Eylau, and at Friedland where he was badly wounded. For his service, he was made a Commander of the Iron Crown and a Commander of the Military Merit of Wurtemberg and promoted to général de division.

Taking part in the invasion of Spain, General Mouton commanded the 2nd Infantry Division under Bessières and distinguished himself at Medina del Rio Seco. Taking command of a division in II Corps, he fought at Burgos, and then quit his command to serve as an aide-de-camp to Napoleon again.

When Napoleon returned to France in 1809, Mouton followed and took part in the Danube campaign. After fighting at Abensberg, at Landshut Mouton led the storming of the blazing bridge, causing Napoleon to make the pun, "My sheep is a lion!"2 (The word 'mouton' is French for sheep). Continuing to serve as an aide-de-camp, he fought at Eckmühl, and then at Aspern-Essling where he was placed in charge of the Fusiliers of the Guard and ordered to counterattack against the Austrians assaulting Essling. Another Imperial aide-de-camp, General Rapp, was ordered to reinforce the village of Aspern, but upon seeing the size of the force against Mouton, he disobeyed orders and rode to Mouton's aid. Their combined forces successfully forced back the Austrian attack and enabled the French to retain possession of the village. During the retreat of the French to the isle of Lobau, Mouton was wounded by a ball, but rewarded for his bravery by Napoleon making him a count. After serving at Wagram , in the next years Napoleon gave Mouton the title of Count of Lobau and he became a Knight of the Order of Saint-Hubert of Bavaria.

In 1812, Mouton continued in his aide-de-camp duties and took part in the Russian campaign. When Napoleon left the army and returned to Paris, Mouton accompanied him. The next year he was rewarded with a Grand Cross of the Order of the Reunion, and then fought at Lutzen by leading Ricard's division in the attack on the village of Kaya. That September, he took command of I Corps at Dresden, and fought at Giesshubel before fighting at Racknitz the next month. When the city finally surrendered in November, Mouton became a prisoner of war and was sent to Hungary.

Finally returning to France in June of 1814, before long Mouton was put on non-activity. With the Emperor's triumphant return from Elba, Mouton again became an aide-de-camp, was made a peer of France, and then took command of VI Corps. After fighting at Ligny, he took part in the Battle of Waterloo before being captured at Plancenoit in the evening. Sent to England as a prisoner of war, the new French government proscribed him but could not touch him in England. Once released, he moved to Belgium until he was finally allowed to return to France at the end of 1818. He then entered politics and supported Louis-Philippe and was later made a Marshal of France in 1831.