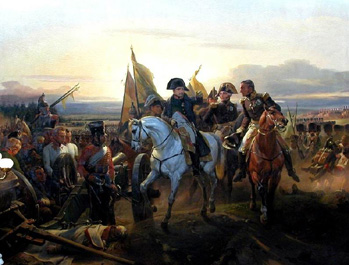 While the French had won the Battle of Heilsberg, they had not crushed the Russian army and destroyed its ability to fight. The Russian General Benningsen had begun withdrawing his army to the east, and Napoleon was anxious to force a decisive confrontation on the Russians to end the war. On the evening of the 13th, forward detachments of Marshal Lannes' Reserve Corps skirmished with a cavalry detachment of the Russian army around Friedland. Lannes quickly realized that a significant portion of the Russian army was in front of him on the other side of the Alle River, but his small force of roughly 15,000 stood little chance of blocking the Russian withdrawal to the east. He also knew that three French corps were within a day's march of his position, and if he could hold the Russians in front of him until the arrival of the rest of the Grande Armée, the French could win their decisive victory. On the other side of the river, Russian General Benningsen saw great opportunity too, an isolated French corps could easily be destroyed if he brought his entire army of 65,000 soldiers to bear on it. However, in his desire to crush the French, the Russian general ignored the tactical dangers of placing his army with its back to a river.

Benningsen ordered pontoon bridges to be constructed over the river, and by dawn on the 14th he had about 10,000 troops over the river with the rest of the army crossing as quickly as possible. Marshal Lannes, hoping that the smoke from the guns would conceal the small size of his force, ordered his artillery to fire at the Russians even though they were out of range. Grouchy's dragoons and Nansouty's cuirassiers had arrived during the night, and General Oudinot's grenadiers had successfully defended the Sortlack wood on the French right from repeated attacks.

By eight in the morning, the Russians had mostly crossed the river and formed up, with General Bagration commanding four divisions on the Russian left, General Gorchakov commanding three divisions on the right, and two corps forming the center. Roughly 60,000 Russian soldiers faced 16,000 French, odds that were not lost on either commander. Marshal Lannes had been sending aides to Napoleon repeatedly requesting reinforcements, but Napoleon did not seem convinced that Lannes faced more than an advance guard of the Russians. Lannes shouted to one of his aides, "Ride your horse into the ground if you have to, but tell the emperor we're fighting the entire Russian army!" Lannes began shifting his men behind ridges and cover, trying to make it seem like his force was everywhere and did not have weak points in the line from being spread so thin.

Benningsen ordered an attack, sending General Uvarov and sixty cavalry squadrons against the village of Heinrichsdorf on the French left and two divisions to take the Sortlack forest on the French right. Oudinot tenaciously held the woods against superior numbers, and every time his men were forced back, he counter-attacked and retook the woods. To the north, Grouchy realized that he could not stand against such a cavalry onslaught, and turned around and rode away, hoping to tire the Russian horses before they inevitably clashed. General Nansouty galloped up alongside him, and they quickly came up with a plan to deal with the superior numbers of Russian cavalry. As Uvarov chased Grouchy's dragoons, suddenly Nansouty's cuirassiers appeared and charged into their flank. At the same time, Grouchy wheeled around and charged headlong into the Russian cavalry. Uvarov and his cavalry fell back, but both sides continued to charge and countercharge against each other for the next few hours, until Uvarov finally gave up and rode back to the Russian lines.

Verdier's division and Marshal Mortier's corps arrived in the midst of this fighting and were immediately thrown into the action, bringing the French forces up to a combined size of 35,000, much better odds but still badly outnumbered. Shortly after noon, the Emperor Napoleon arrived on the battlefield, with the rest of the Grande Armée not far behind. Analyzing the situation, many of the imperial staff wanted to wait until the next day to attempt to destroy the Russians, as the troops under Marshals Davout and Murat were too far away to arrive until the 15th. Napoleon sensed that such a good opportunity was not likely to occur again, and believed it a good omen to fight on June 14th, the anniversary of the Battle of Marengo. In fact, Benningsen was contemplating withdrawing during the night as he had scored no great successes in the battle and every minute that passed more French troops were arriving.


While the fighting continued, the French spent most of the afternoon moving reinforcements into position in preparation of the attack Napoleon planned. Lannes' worn out Reserve Corps held the center, with Mortier's VIII Corps on the left and Ney's VI Corps holding the Sortlack forest. General Victor's I Corps and the Imperial Guard formed the reserve, and Napoleon's plan was to have Ney attack on the right, rolling the Russians upward as they could not fall back due to the river. By now the French force had risen to 80,000 soldiers, with half of those troops fresh and eager to fight.

By 5:30, a lull had fallen on the battlefield as the French prepared and the Russians began to withdraw. A cannonade erupted from the French lines, signaling to Marshal Ney to begin his attack. Benningsen was surprised by the renewed onslaught, as he considered it too late in the day for the French to launch any new attacks before darkness fell over the battlefield. Marchand's division launched itself against the Russians, but Benningsen ordered cavalry and artillery to stop the attack, and the French attack stalled. Seeing this, Napoleon ordered Victor's corps to assist Ney, and Dupont's division launched into the enemy cavalry. At the same time, General Senarmont ordered his horse artillery to charge the Russian lines, and in a series of leapfrogging bounds they rushed ever closer to the Russian line, firing and covering each other as they moved closer. Finally, his artillery arrived within a mere 60 paces of the Russian line and opened fire at near point blank range, nearly obliterating the Russian infantry.

Benningsen desperately tried to relieve the pressure on his left by ordering Gorchakov to attack the French center and left, but the attack did not have enough momentum to get anywhere. The French calmly stopped the attack, and Napoleon ordered Savary's fusiliers and some of the Imperial Guard cavalry to occupy Gortchakov's troops so they could not interfere with the events playing out to their south.

Ney reformed his troops and continued the attack, and Victor's corps continued to support this attack and press forward. The Russians were driven back, continually pressed into a smaller area as they had nowhere to retreat. A bottleneck had formed on the bridge through Friedland as there were just too many troops trying to cross it at once. Desperate to avert the looming disaster, Benningsen ordered the Russian Imperial Guard to stop Ney's attack, but they could do nothing to stop the French momentum. Friedland was set on fire by the Russians to try and divert the French, but unfortunately for them, the flames spread to the pontoon bridges, destroying most of their avenues of escape.

Luckily for the Russians, a ford was discovered just north of Friedland, and troops began to stream across it. The French on the left, particularly the cavalry under Grouchy, could have charged into the midst of the retreating Russians and denied them this ford, but inexplicably they did not move. While Grouchy had worked wonders early in the day in holding off the superior numbers of Russian cavalry, this was perhaps a warning sign of Grouchy's lack of initiative that would haunt the French eight years later at Waterloo and Wavre.

Benningsen managed to extricate the rest of his army across the ford, as the French continued to pursue. It had been a great victory for the French, suffering only about 8000 casualties but inflicting roughly 20,000, or about a third of the Russian army. They also captured 80 guns, however, had they blocked Benningsen's escape route across the ford, the victory would have been much greater. Regardless, the scale of the victory was enough to convince Czar Alexander to agree to negotiate a peace treaty with Napoleon, bringing about the landmark Treaty of Tilsit and the final destruction of the Fourth Coalition. Unfortunately for Napoleon and the French, within a few years Alexander would blatantly disregard the provisions set out in the treaty, leading to the disastrous Russian campaign of 1812.