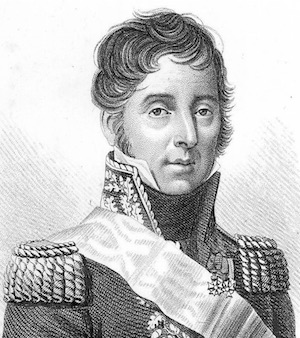 Verdier led a long and active career with the French army, beginning with his enlistment in the infantry regiment of La Fère in February of 1785. Two years later he was a corporal, and by January of 1792 he was serving with the 2nd Batallion of Volunteers of Haute-Garonne in the Army of the Eastern Pyrenees. In March of 1794 he became an aide-de-camp to Augereau, and within a few months he was promoted to capitaine. In August, Verdier was wounded in the right hand by a saber blow at Saint-Laurent de la Mouga, but that was not going to keep him out of action for long. That November, he distinguished himself at Llers leading a battalion from Drôme.

Continuing his association with Augreau, Verdier was appointed commander of the 1st Brigade of Augereau's division in March of 1795. He was transferred to the Army of Italy with the division, and in December took up the duties of chief of staff for the division. After distinguishing himself at Castiglione in August of 1796, he was promoted to général de brigade shortly afterwards. A month later Verdier fought at Bassano , and in November he took part in the fighting at Arcola and was wounded there by a shot to the left thigh.

In March of 1797, Verdier joined Guieu's division, and with this unit he fought at the fort of Ciusa di Pletz. That June, he returned to Augereau's division to command the 3rd Brigade. Transferred to the Army of the Orient, he sailed to Egypt and was given command of a brigade of Kléber's division. By July, he had been transferred to command the 2nd Brigade of Dugua's division, with which he fought at the Battle of the Pyramids . The next month Verdier was victorious over Soubat at the river delta.

With the dawn of 1799, Verdier joined Kléber's division in the expedition to Syria, and he took part in the fighting at El Arisch, Chagarah, and Mount Tabor . Taking part in the Siege of Acre, Verdier was wounded by a bayonet, and he also notably repulsed a sortie by the fort's garrison. Later that year he was appointed commander of Damietta and won a battle at Lesbeh. In March of 1800 Verdier became commander at Cairo, and in his time there he resisted an uprising by rebels. Kléber promoted Verdier to général de division in April of that year, and he continued to serve until taken prisoner at the surrender of Cairo in June of 1801. For his excellent service in Egypt, he was later awarded a sabre of honor.

After returning to France, Verdier was employed under Murat for a time in the Cisapline Republic, then placed in charge of the troops of Etruria. As the campaigns got underway in 1805, Verdier took command of a division of the Army of Italy under Marshal Masséna. During this campaign he was wounded in the crossing of the Adige, and then became commander at Livorno. In February of 1806, Verdier was transferred to the Army of Naples where he took command of a division of Reynier's corps. He led this division into the fighting at Campo Tenese, and in July he evacuated Cosenza.

In March of 1807 Verdier left Italy to join the Grande Armée, and in May he took command of the 2nd Division of the Reserve Corps under Marshal Lannes. After taking part in the fierce fighting of Heilsberg and Friedland, he was rewarded the next year with two honors, being made a Count of the Empire and a Commander of the Iron Crown.

Spain was the next campaign for Verdier, and in March of 1808 he took command of the 2nd Division of Bessières' corps. After winning at Logrono in June, he was chosen to replace Savary as commander of Aragon and Navarre. Taking charge of the siege of Saragossa, Verdier was wounded during the struggle and then later lifted the siege. In November he was to join Soult's corps, however, he did not take up the command, instead being directed to command the province of Bilbao. Replacing Reille as commander of a German division, Verdier then took up the siege of Gerona in March of 1809, and in December he accepted the city's surrender. Before returning to France in April of 1810, Verdier distinguished himself in the fighting around Arenys de Mar the month before.

For the next few years, Verdier commanded a division in a corps of observation, which later became Oudinot's II Corps for the Russian campaign. Taking part in the campaign against Russia, he fought at Jaboukowo, Khastitzi, Polotsk, and Swolna, and then again at Polotsk he was badly wounded. Due to his awful wounds, he was sent back to France and avoided the horrors of the retreat.

By May of 1813 Verdier was fit enough for duty and he took command of the 4th Infantry Division of the Corps of Observation of the Adige. That September he took command of a corps under Prince Eugene consisting of Rouyer's and Gratien's divisions in the Army of Italy, and was then placed under Grenier. Wounded by a shot in the combat of Ala in November, it was not bad enough to put him out of action, and in 1814 he took command of a corps consisting of the divisions commanded by Quesnel, Fressinet, and Palombini. In February he fought at the battle of the Mincio and at Borghetto, and these were the last significant actions of his career.

After Napoleon's abdication, Verdier returned to France in June, only to be put on non-activity. However, he was rewarded with a Grand Cross of the Legion of Honor in January of 1815. For the Hundred Days, Verdier rallied to Napoleon and commanded the 17th Infantry Division of Brune's IX Corps, and he was made a Peer of France. Shortly after Napoleon's second abdication, he retired.