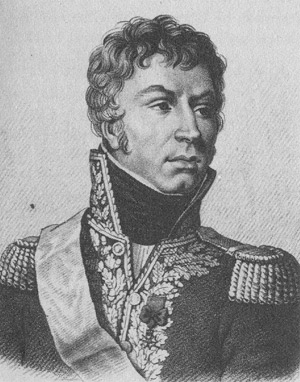 Cause of Death: Fatigues of war

A talented officer from Switzerland, Jean-Louis-Ebénézer originally began his career as a civil engineer. After the onset of the French Revolution, in September of 1792 Reynier volunteered to become a gunner when the Revolution needed soldiers. As he was just beginning his military career he was ordered to help work on the fortifications of Saint-Denis, but less than a month after that he was serving as a capitaine in the Army of the North. After serving at the Battle of Jemappes , the Siege of Maestricht, and the Battle of Neerwinden , in September of 1793 Reynier was promoted to chef de bataillon. In early 1794 he received a promotion to chef de brigade and became the chief of staff of General Souham's division. That June Reynier was promoted to général de brigade, but he refused the promotion, insisting he was too young to be a general at age 23. While the promotion was delayed, it did not last long for in January of 1795 he was promoted to général de brigade and this time it stuck. After serving as chief of staff of the Army of the North for a few months, Reynier took command of a brigade in July of 1795. In 1796 he became the chief of staff to General Moreau in the Army of the Rhine and Moselle and later that year he received a promotion to général de division.

Designated for the Army of the Orient in 1798, General Reynier spent the next few years with the expedition to Egypt, initially commanding a division of the army. Seeing action almost immediately, in June of 1798 he seized the isle of Gozzo, and in the following months he served at the Battle of the Pyramids , was victorious over the mamelukes at El-Khanka, and was appointed Governor of the province of Charquieh. In 1799 he took part in the expedition to Syria where he seized the fort of El-Arisch. Reynier was not chosen to return to France with Napoleon, and therefore he continued to serve in Egypt under Napoleon's successor General Kléber. The next year Reynier fought at the Battle of Héliopolis, Belbeis, and Koran, and then he took part in putting down the revolt of Cairo. After Kléber was assassinated, Reynier initially supported the new commander-in-chief General Menou due to his seniority. However, after commanding the right at the Battle of Canope in 1801, Reynier became openly hostile to General Menou's leadership, blaming Menou for the French army's reverses. Having little regard for Menou's abilities, Reynier was frequently arguing with Menou and expressing his discontent to other officers, while Menou openly blamed Reynier, Kléber's former chief of staff Damas, and the recently deceased Lanusse for losing the battle. The arguments came to a head when on the night of May 13th, Menou charged Reynier with treason and ordered General Destaing to arrest Reynier, Damas, Daure, Boyer, and a few other officers. Rather than quietly arrest the accused, Destaing brought a sizable contingent of armed troops and completely surrounded Reynier's house in Alexandria. Reynier was prepared to use force to defend himself, but after he was assured the only fate awaiting him was to be put on a ship and returned to France, he wrote a letter to Menou and surrendered.1

Reynier was put on the ship Lodi and sent back to France immediately. Upon returning to Paris he tried unsuccessfully to convince First Consul Bonaparte that the downfall of the French presence in Egypt was Menou's fault. Receiving little support from Napoleon, Reynier decided to write a history of the campaign entitled State of Egypt after the Battle of Heliopolis that criticized Menou and his actions. Meanwhile, under Menou's leadership the French had been forced to surrender to the British in September of 1801. By 1802 the troops had returned from Egypt, and General Destaing who had arrested Reynier began to read Reynier's work. As Destaing read the section that alleged he had left the battlefield of Canope after a slight wound, he became furious and then challenged Reynier to a duel to which Reynier obliged.2 On May 5th, 1802 the two generals met in Bois de Boulogne and Reynier killed Destaing during the duel with a single pistol shot to the chest. Napoleon was furious since he had banned dueling and he therefore banished Reynier from Paris, but Reynier's talents were too good to permanently discharge him.

In 1803, Reynier was back in command, taking charge of the troops stationed at Toulon. In 1804 he took command of the 2nd Division of the Corps of Observation of Naples under General Gouvion-Saint Cyr, and the next year he fought against the Austrians at Pescara and was victorious at Castelfranco over the Prince of Rohan. In January of 1806 Reynier took command of the right wing of the Army of Naples under Marshal Masséna and the II Corps of the same army. Ordered to conquer Calabria, he was victorious at Campo Tenese, but then overcome at Santa-Eufémia. Masséna arrived to take command of the army in July, and then Reynier took command of the French army in Calabria in January of 1807. Fours months later in May he was victorious at Mileto, and the following month he seized Cotrone. During the campaigning in Calabria Reynier received the honor of being made a Grand Officer of the Legion of Honor, and in February of 1808 Mathieu de Saint Maurice arrived to replace him.

Now named the Minister of War and the Navy of the Kingdom of Naples, and the commander-in-chief of the Army of Naples, Reynier had clearly proven his abilities. After a year fulfilling those positions, he rejoined the Grande Armée in Austria during the Danube campaign of 1809 and in July he took charge of the isle of Lobau. After the Emperor dismissed Marshal Bernadotte from command during the Battle of Wagram , Reynier was chosen to replace Bernadotte in command of the Saxon IX Corps.

With the campaign against Austria concluded, in October Reynier traveled to Paris to take command of a division that was preparing to join the Army of Spain. Once he arrived in Spain, he replaced Heudelet as commander of the II Corps of the Army of Spain, which in a few months time would become the II Corps of the Army of Portugal under Masséna. Contributing to many of the battles of the campaign, he covered the siege of Ciudad-Rodrigo, commanded the left at the Battle of Bussaco , was victorious at Sobral, commanded the left in front of the lines of Torres-Vedras, fought at Santarem, fought off the British at Sabugal, and commanded the right wing at Fuentes de Oñoro . Despite setbacks experienced by the French, Reynier was rewarded for his efforts by being made a Count of the Empire, a Grand Dignitary of the Order of Two Sicilies, and a Commander of the Order of Saint Henry of Saxony. Next he was given command of the 2nd Army of Portugal under Marmont's overall command until he returned to France in January of 1812 to prepare for the Russian campaign.

Taking command of the VII Saxon Corps in 1812, Reynier led them into Russia where he was victorious at Gorodechtna. In the fierce fighting of the retreat from Russia, he was beaten at Lapenitza in November, but three days later he was victorious at Wolkowisk. Continuing on the defensive and falling back, in February of 1813 Reynier was overcome at Kalisz and retired to Glogau. Now leading the Saxons in Germany, he fought at Bautzen, Dresden, Reichenbach, Gross-Beeren, and Dennewitz and in the meantime he was rewarded with a Grand Cross of the Order of the Reunion. In September Reynier occupied Dessau, and then the next month he forced the Allies to raise the siege of Wittenberg before leading his corps to Leipzig to take part in the Battle of the Nations. Despite distinguishing himself during the fighting, the Saxons suddenly switched sides during the battle, and Reynier was easily taken prisoner due to his troops' treachery. The Russians, knowing his abilities and his Swiss birth, offered him a commission in their army, but Reynier refused and remained loyal to France.

The following February Reynier returned to France thanks to a prisoner exchange, but worn out by the constant campaigning, he fell ill and died shortly thereafter. During the desperate campaign of 1814, after Reynier's death, Napoleon took the time to write to General Clarke, "I am surprised that nothing has yet been done to honor the memory of General Reynier...a man who served well, who was an honest man, and whose death was a loss for France and for me."3