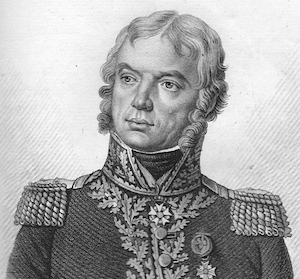 As the Revolution began in 1789, François Etienne Damas joined the National Guard on the same day as the storming of the Bastille. He initially served in Paris and then in 1792 he became an aide-de-camp to General Meusnier. In October of that year Damas was promoted to sous-lieutenant, and then in February of 1793 he received another promotion, this time to capitaine. That year Captain Damas served at the Siege of Mainz where Meusnier was killed and Damas received a promotion to chef de bataillon during the siege. Due to the terms of the surrender of Mainz, the soldiers who served there were not allowed to engage the Allied forces for the next year, and therefore Damas was sent to the Army of the Coasts of Brest. Next he joined the Army of the West where he was promoted to général de brigade in November of 1793.

In 1794 Damas initially served in Duquesnoy's division and then in October he joined the Army of the Sambre and Meuse where he met and served under General Kléber. 1795 saw Damas commanding the advance guard of Lefebvre's division, and then in 1796 he served in Championnet's division and took part in the crossing of the Rhine in July where he was badly wounded.

In 1798 Damas became General Kléber's chief of staff and therefore he joined the Army of Orient. After arriving in Egypt, he served a dual role of commanding a brigade and remaining as chief of staff of the division. Damas fought and won at Gemyleh in September of 1798 and then he traveled to Syria with the army, still serving under Kléber. He was wounded by a ball to the arm during the Siege of Jaffa and afterwards he was sent to Damietta to recover.

After Napoleon left the army to return to France, Kléber assumed command of the army and promoted Damas to général de division and made him chief of staff of the Army of the Orient. On June 14th, 1800, Damas was walking alongside Kléber when an assassin surprised them and fatally stabbed Kléber. Damas continued to serve as chief of staff after General Menou became the commander of the Army of the Orient, and in March of 1801 Damas served under Reynier during the Battle of Canope . Menou accused Damas of losing the battle, probably unjustly given that Reynier and Lanusse had both accused Menou of incompetence and Menou had lost all the gains that his predecessor Kléber had accomplished. On May 14th, Menou sent General Destaing to arrest Reynier, Damas, and Boyer, though once back in France Reynier would kill Destaing in a duel related to this infighting.

Damas was put on the sloop Good Union and sent off to France, but the British intercepted the ship near Crete and temporarily took him prisoner. When he finally made it back to France, he was put on non-activity, probably due to Menou's accusations. In 1804, when General Moreau was arrested, Damas was implicated and imprisoned at the prison of l'Abbaye.

Marshal Murat, perhaps sensing the injustice done to Damas, requested that Damas be released from prison and Napoleon granted the request. In January of 1807 Damas left France to join the service of the Grand Duchy of Berg, Murat's dukedom. Damas remained at the Grand Duchy of Berg until 1812 when he joined the Grande Armée to participate in the campaign against Russia. For this campaign he took command of the brigade from the Grand Duchy of Berg which formed part of Daendels' division and served in Marshal Victor's IX Corps. During the retreat, Damas served in the rear guard.

Damas survived the retreat from Russia and in February of 1813 he took command of a new brigade which would become part of the 17th Division of Lauriston's V Corps. After serving in Germany throughout that year, in November he was given command of the 12th Infantry Division and he returned to France's service as a général de division. Next he took part in the defense of France in 1814.