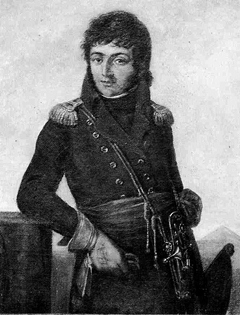 Général de division who was killed at Canope

Lanusse originally entered the national guard of Agen in 1789, and remained with them until 1792, when he joined a company of grenadiers of Limoges as a lieutenant. The next year, he joined the 5th Battalion of Volunteers of Haute-Vienne, and a week later was elected lieutenant colonel of the volunteers. He spent 1793 serving in the Vendée and was then transferred to the Army of the Eastern Pyrenees. While under Sauret in 1794, he distinguished himself at the Battle of Montagne-Noire , and was promoted to chef de brigade shortly afterwards.

In early 1796, Colonel Lanusse was placed in charge of one of the mobile columns traveling to join the Army of Italy. Once there, he joined Masséna's division, distinguishing himself leading the 8th Light Infantry at the Battle of Dego . Later that month, General Bonaparte promoted him to général de brigade to replace the fallen General Causse. After a short stint as chief of staff to Dallemagne, Lanusse commanded the 3rd Brigade under Masséna and fought at Fombio. Placed under Despinoy, he took part in the siege of the citadel of Milan, and then in August joined Augereau's division. After commanding Augereau's light infantry at Promilano, everything went well for Lanusse until November, when at Brenta he was badly wounded by a saber blow and consequently taken prisoner. By February of 1797 he was freed and commanding a brigade under Victor.

Serving as commander of Toulon in September, Lanusse was designated for the Army of England, later the Army of the Orient, and then left for Egypt on the sloop Le Vif in June of 1798. After disembarking at Alexandria, Lanusse traveled with the army until in August he was named governor of the province of Menouf, replacing Zayonchek. In this capacity he won the battle of Mit-Ghamar, and alongside Murat he won the battles of Mit-el-Haroun and Gebelal Tell. The next year he defeated El Modhy at Koufour-Negoum, and was then attached to Rampon's division for the upcoming Battle of Abukir. Shortly after the victory at Abukir, he returned to govern his province, until appointed commander at Damietta in October.

By January of 1800 the English were making their presence felt, and Lanusse was ordered to return with his troops to Cairo. That same month he replaced Friant as commander of the columns returning to Cairo and he was promoted by Kléber to général de division. In March of 1801, he rejoined Friant and tried to stop the English march by Lake Madieh. Slightly wounded in the action and overpowered by the superior numbers of the English, he was forced to fall back.

Barely more than a week later, Lanusse was commanding the left at the Battle of Canope . During the night attack, he attacked the English defensive positions, and also rallied Valentin's brigade. Sometime during the course of the battle, he reportedly accused General Menou of incompetence.1 He was perhaps justified in this statement, for the loss of the battle effectively ended the French presence in Egypt, and as the battle continued to rage his left knee was shattered by grapeshot. His leg was amputated but it was not enough to save him for Lanusse died within a few hours.