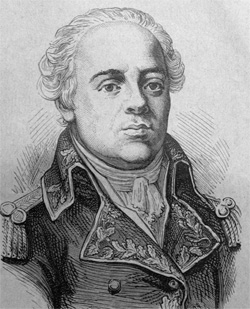 The son of a general, Jacques-François Menou would also become a general in time but never really looked the part due to being short, overweight, and balding. He joined the military in 1768, and by the time of the Revolution had risen to the rank of colonel and been honored as a Knight of Saint-Louis. Though elected as a deputy of the nobility to the Estates General, he supported the reform efforts and would serve as secretary and later president of the National Constituent Assembly.

In anticipation of a return to the military, Menou was assigned to the Army of the North in 1792 but did not join the army, instead staying in Paris and serving in the 17th military division. In May of 1793 he was promoted to général de division and became the chief of staff to the Army of the Coasts of La Rochelle. Campaigning that summer, he was wounded three times by shots, at Saumur, Vihiers, and Ponts-de-Cé. Authorized to retire because of his wounds, Menou held off on retiring until September of the next year.

His retirement did not last long however. In March of 1795, Menou returned to active duty. After a brief stint at Amiens and then Lyon, he returned to Paris where he disarmed the suburb of Saint-Antoine. That July he was given command of the Army of the Interior, and then in October he was ordered to disarm a royalist movement rising against the government in Paris. General Menou negotiated with the rebels, extracting promises from them to disarm, but when they failed to disarm he was relieved of command and arrested. In the meantime Barras took over Menou's command and General Bonaparte offered his services, resulting in the famous "whiff of grapeshot" of the 13th Vendémiaire that would put down the rebellion and propel Napoleon to greater fame. With the government preserved, Menou was put on trial for his failure to stop the rebellion, but he was acquitted at the end of the month.

Menou did not hold an active command again until he joined the expedition to Egypt in 1798. When Baraguey-d'Hilliers fell ill, Menou was given command of his division. Leading the division in the assault on Alexandria, he was wounded six times and then thrown from the top of the ramparts.1 Later that month he was named the governor of the province of Rosetta. During his tenure as governor, General Menou converted to Islam, taking the name Abdallah, and married a local woman who was the daughter of a bath keeper. The next year he directed the siege of the fort of Abukir after the Battle of Abukir and then was placed in charge of the provinces of Alexandria, Rosetta, and Bahireh.

When Kléber was assassinated in June of 1800, Menou succeeded him as overall commander of the French presence in Egypt. Menou was known as an excellent administrator but poor with strategy and tactics, having once told Napoleon to consider him a loyal subordinate but not a general.2 Unfortunately his abilities could not compare to Kléber's and he was not up to par for handling the challenges faced by the French army in Egypt. His leadership was questioned by some of his officers, including Reynier who he ordered arrested for insubordination, and Lanusse who criticized his leadership at the Battle of Canope shortly before dying. Menou publicly blamed the loss at Canope on his chief of staff General Damas, and then on May 14th he ordered General Destaing to arrest both Reynier and Damas. Eventually Menou was forced to surrender to the British in Alexandria after a lengthy siege, and returned to France in the autumn of 1801.

Once back in France, Menou would fulfill administrative positions for the rest of his career. He became the administrator general of Piedmont and later become a Grand Officer of the Legion of Honor before being placed in charge of the départements from the Alps to Marengo. In 1807 he received a further award, being made a Knight of the Iron Crown, and then in 1808 he became a Count of the Empire and served as governor general of Tuscany. In 1809 he fulfilled the same position in Venice, and then in 1810 he was authorized to return to France shortly before his death.