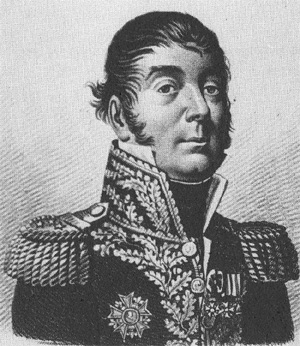 General Rampon, a soldier for many years before the Revolution, is most well known for his actions during the first Italian campaign. Enlisting in the regiment of Médoc in 1775, he slowly rose through the non-commissioned ranks, eventually becoming a sergeant-major in 1789. With the Revolution came a commission and faster promotions as he was promoted to sous-lieutenant in early 1792 and then lieutenant in August of that year. After working under Anselme at Nice for a short period of time, he joined the Army of the Eastern Pyrenees.

With the young General Bonaparte taking command of the army, Rampon would soon share in the glory. At the start of the campaign, Rampon's unit came under heavy attack from superior Austrian numbers at the redoubt of Monte Legino. Sensing the dire situation, he reportedly swore to fight to the death and told his men, "It is here, my friends, that we must conquer or die."1 After successfully holding his position, General Bonaparte promoted him to général de brigade. The next day Rampon contributed to the victory at Montenotte, and then went on to fight at Millesimo and Dego . That May, Rampon took command of the 2nd Brigade in Masséna's division. Leading this brigade, he fought at Lonato, Salo, Peschiera, Roveredo, Arcola , Rivoli , La Favorite, and Friesack.

In January of 1798 Rampon was designated for the Army of England, but first he joined Mesnard's division under Brune and served in Switzerland. While there, he forced the crossing of Gümenen before returning to France to embark for the now renamed Army of the Orient. Upon arrival in Egypt Rampon took command of the 2nd Brigade of Bon's division, and with them served at the Battle of the Pyramids where he seized the village of Embabeh. For the next six months he commanded the province of Alfieh before joining the expedition to Syria as part of Bon's division again. During this campaign, he fought at El Arisch, Gaza, Jaffa, Mount Tabor , and Acre. After Bon's death at the siege of Acre, Rampon took command of his former commander's division and led it into action at the Battle of Abukir.

The next January, Rampon was promoted to général de division by General Kléber. That March, he fought at Heliopolis, and later in 1800 he was named a senator, despite not being in France. In 1801 he commanded the center at the Battle of Canope , and after the loss he commanded the redoubts surrounding Alexandria until the French surrender. Returning to France in November, in the next year he would take up his seat in the senate, receive a saber of honor, and retire from the military.

In 1804 Rampon received an award, being made a Grand Officer of the Legion of Honor. In the future he would also become a Commander of the Iron Crown. In 1805 he took charge of the National Guard of Nord, Pas-de-Calais, and Somme and in 1806 he obtained a senate seat for Rouen. With the new nobility of the First Empire, Rampon was created a Count of the Empire in 1808. The next year, despite his official retirement, he took command of the camp of Boulogne before taking command of the 3rd and 4th divisions of the Army of the North under Marshal Bernadotte.

At the end of 1811, as soldiers were being sent east to prepare for the Russian campaign, Rampon was charged with organizing the National Guard of the 10th military division to defend the Spanish frontier. Two years later he took command of the National Guard at Anvers, and as Allied forces began to press forward on all sides, he defended Gorcum. Forced to surrender in early 1814, he was released after Napoleon's abdication and returned to France.

With Napoleon's return, Rampon was made a Peer of France and placed in charge of the 4th military division. After learning of the outcome of Waterloo, he took up a position defending a section of Paris. For his actions during these times, he was struck from the list of peers of France by the Bourbons.