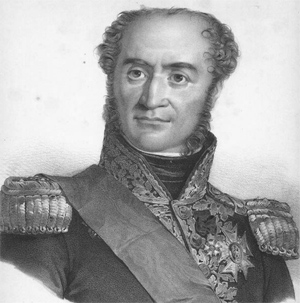 The son of a judge, Guillaume-Marie-Anne Brune had been sent by his family to study law in Paris before the Revolution. While there, he worked as a clerk of a prosecutor and acquired a printing press which he used to publish a satirical news publication. When the Revolution arrived in 1789, Brune embraced it wholeheartedly and became one of the founding members of Club of the Cordeliers, a group formed of some of the most prominent revolutionaries including Danton, Marat, Desmoulins, and Hébert. Brune was already serving as a capitaine in the National Guard of Paris and during this time he became a friend and protegé of Danton.

In October of 1791 Brune joined the 2nd Battalion of Volunteers of Seine-et-Oise. As his mentor Danton continued to rise through the revolutionary ranks, Brune's star rose too. In October of 1792 he was promoted to chef de brigade and then later he was sent to the staff of General Dumouriez in the Army of the North. Brune's next assignment was as chief of staff of an army formed to fight rebels near Caen in July of 1793. Brune won at Pacy-sur-Eure and a month later he was promoted to général de brigade. Next he served at Hondschoote before being sent to the Gironde to suppress more rebels as commander at Bordeaux.

At the end of 1793, Brune was appointed to the military committee of the Convention. In the meantime he married Angélique Pierre, a young woman who worked as a metal burnisher. When Brune's friend and mentor Danton was targeted by Robespierre, Brune dodged the executions of the Reign of Terror by allying himself with Paul Barras and staying out of the way. Now allied with Barras and stationed in Paris, in October of 1795 on the 13th Vendémiaire a royalist mob threatened the Directory. Brune took part in defending the government and served under General Bonaparte during the fighting.

General Brune was next to Marseille with Fréron to ensure that the region would not rise against the government. Recalled to Paris that December, Brune was eventually sent to the Army of Italy in September of 1796 where he took a command in Masséna's division. That November he fought at Arcola , and then in January of 1797 he served at San-Michele and Rivoli . Two months later Brune took command of Masséna's advanced guard, and then in April General Bonaparte promoted him to général de division.

In January of 1798 Director Barras tasked Brune with a secret mission to invade Switzerland to nominally liberate the Swiss but in reality plunder the nation. Brune took command at Lausanne on February 5th and quickly advanced. A little over a month later, he was named commander-in-chief of the Army of Italy and he finally traveled there in April, having finished plundering Switzerland while fillings his own pockets notably. Brune did not hesitate to plunder in Italy either, and in October Barras then decided to send a significantly wealthier Brune to Holland.

Given Brune's reputation from Switzerland and Italy, the Dutch were not eager to work closely with him. But when the British landed an army in Holland in August of 1799, Brune took command of the combined forces of the French and Batavian Republics to fight them off. After losing at Zyp in September, he and his men won at Bergen, and then in October they were beaten at Alkmaer but made up for it with a significant victory at Castricum that ended the British hopes of conquest.

After Napoleon seized power in a coup d'état, he recalled Brune from Holland and made him a Councilor of State and commander-in-chief of the Army of the West. In May of 1800 Brune was sent to Dijon, and then in August he was named commander of the Army of Italy. Brune arrived in Italy and in December he and his men won at Monzembano at the crossing of the Mincio, but the battle was nearly lost. Napoleon was unhappy with Brune's performance and in 1802 he decided to send Brune to Turkey as the French ambassador. While Brune was there, the Empire was established in France and Brune was appointed a Marshal of the Empire. However, the Turks refused to acknowledge and respect the legitimacy of France's new government or her ambassador, and a frustrated Brune returned to France in December of 1804.

Marshal Brune was given the Grand Eagle of the Legion of Honor upon his return, and after war broke out in 1805, Brune took over the camp of Boulogne while many of the other marshals led corps on campaign. In December of 1806 he was appointed Governor General of the Hanseatic cities, and and in 1807 he was given command of a corps with which he seized Stralsund. Next Brune signed a treaty with Sweden for the Island of Rugen, but the wording of the treaty infuriated Napoleon in that it mentioned "the French Army" instead of "the Army of His Imperial and Royal Majesty". Brune was dismissed from his command and he retired to St. Just.

Seven years later in 1814 Napoleon abdicated and Marshal Brune rallied to the Bourbons. They in turn named him a Knight of Saint Louis. However, when in 1815 Napoleon escaped exile and resumed power for the Hundred Days, Brune rallied to him. Napoleon named Brune a Peer of France and governor of Toulon. After Napoleon's second abdication, Brune refused to remove the tricolor in favor of the fleur de lys.

Finally at the end of July Marshal Brune handed over his command and set out for Paris. Along the way he left his escort and stopped in Avignon to change horses. A crowd spotted his uniform and mistakenly thought he was a revolutionary who had been part of the massacres of Avignon during the bloodiest parts of the Revolution. Brune attempted to take refuge in a hotel and began to write a last letter to his wife, but when the mob broke in they shot him, killing him. The mob then stabbed his body repeatedly before finally tossing it into the Rhône River.