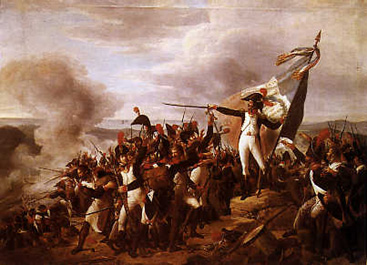 As the Austrians attacked the French under Cervoni at Voltri on the 10th of April, they also moved to attack the French at Montenotte under Rampon. Cervoni fell back from Voltri without many casualties, while Rampon tenaciously held his position against General Argenteau's 6000 men.

Quickly grasping the situation, General Bonaparte realized the Austrian forces were split and it was an excellent opportunity to destroy one wing of the enemy army. He ordered Masséna's and La Harpe's 9000 troops to Montenotte, and on April 12th they began the attack. La Harpe attacked the the Austrians frontally and met resistance, but Masséna launched his troops on the left against the Austrian right and successfully moved into the Austrian rear. Masséna's attack proved to be too much for the Austrians, and they fell back in great disorder, suferring 2500 casualties.

It was General Bonaparte's first victory as a commander-in-chief, and a helpful morale boost to the Army of Italy. Many muskets were captured from the Austrians, which immediately went to arming the many French soldiers without weapons in the under-supplied Army of Italy.