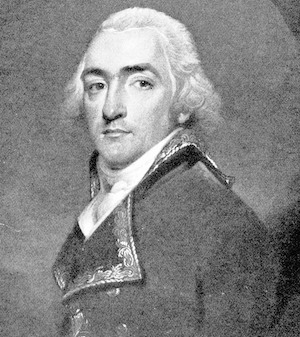 The son of a mayor, Herman Wilhelm Daendels had a number of occupations before becoming a soldier, initially working as a brick manufacturer before earning a doctorate in law and becoming a lawyer at Hattem in 1781. In 1787 he became a major in a brigade of insurgents of Holland against the Stadtholder, Prince William V of Orange. After Daendels participated in a fight near Amsterdam, the insurgents were defeated and like many he fled to France to avoid prosecution.

As the Revolution got underway in France, in 1792 Daendels became a lieutenant colonel of the 4th Battalion of the Free Foreign Legion in service of France. Serving with the Army of the North, he served under Dumouriez and took part in the expedition to Holland in 1793. That autumn he took part in the campaigning focused on Menin, and then in April of 1794 he was promoted to général de brigade in Souham's division. Daendels continued to fight, serving at Courtrai in both April and May, and then at Hooglède in June and the the isle of Cadzand in July. Next he joined Delmas' division and took part in the siege of Bois-le-Duc before seizing the isle of Bommel and Fort Saint-André in December. A promotion to général de division followed immediately thereafter.

In April of 1795 General Daendels was recalled to Paris and then the next month he transferred to the service of Holland. In 1796 he commanded a Dutch division on the Rhine and then in 1797 he took part in the failed expedition to Ireland. Daendels next took command of the 1st Division of the army defending Holland, and when the British attacked in 1799, he served under General Brune and fought at Zyp, Bergen, Alkmaer, and Castricum . Afterwards, Daendels retired to the Gelderland for a number of years.

In 1806 Daendels re-entered the service as a lieutenant general and took command of a Dutch division. The following year he was named the Governor General of the Dutch Indies and a Marshal of Holland and he then received the Grand Cross of Military Merit of Holland. As Governor General of the Dutch Indies, Daendels traveled to Java, where he arrived in 1808 and remained until 1811.

Back in Holland, Daendels was admitted to French service as a général de division in October of 1811. The next year he took command of the 26th Division which was formed of troops from Baden, Hesse-Darmstadt, and Berg. During the campaign against Russia of 1812, Daendels and his division served as part of IX Corps under Marshal Victor. He led his men into action at the Battle of the Berezina that November.

In February of 1813 Daendels was named the Governor of Modlin as the Russians arrived to lay siege to the fortress. Two months later he was rewarded with the Grand Cordon of the Order of the Reunion as he continued to hold out. Daendels and his men held the fortress until Christmas Day of 1813 when he was finally forced to surrender.

After Napoleon's abdication in 1814, the returning Bourbons relieved Daendels of his service to France. Now back in Dutch service, in 1815 he commanded the supply service of the British and Dutch forces during the Hundred Days. Afterwards, he was sent to Africa to the Dutch Gold Coast to develop Dutch interests there.