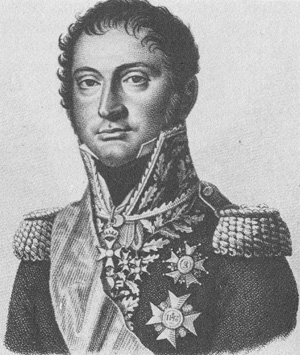 The son of a councilor of the king, Honoré Charles Michel Joseph Reille began his military career by volunteering as a grenadier in the 2nd Battalion of Var in September of 1791. For the next few years he served with the Army of the North and he was promoted to sous-lieutenant in September of 1792. 1793 was a busy year for the young officer as he fought at Liége and Neerwinden in March, and then in October became an aide-de-camp to General Masséna. That November Reille was promoted to lieutenant and the next month he took part in the Siege of Toulon . Reille spent the next five years with the Army of Italy. When General Bonaparte took command and launched his campaign in 1796, Reille took part in much of the fighting, serving at Montenotte, Dego , and Lodi . After Lodi he was promoted to capitaine, and he went on to distinguish himself at Saint-Georges, Caldiero, and Arcola . On January 7, 1797, General Bonaparte promoted Reille to chef d'escadrons in the 15th Dragoons, with which he fought at Rivoli and La Favorite the next week.

In January of 1799 Reille was promoted to chef de brigade. Shortly afterwards he became chief of staff to General Masséna in the Army of Switzerland and he supervised the crossings of the Rhine. Distinguishing himself at the Battle of Zürich , he was later ordered to supervise the positions of the Army of the Alps. In April of the next year, First Consul Bonaparte ordered Reille to deliver orders to the besieged Masséna in Genoa . Despite the tight blockade, Reille managed to mislead the British patrols and enter Genoa by boat despite coming under heavy fire. Assisting with the defense of Genoa, he also commanded the center column under Miollis in the action of Monte-Faccio.

Returning to France in August, Reille was employed in the camp of Amiens in October and then he took up a position with the Corps of Observation of the South under Murat. In May of 1802 he served in the Cisalpine Republic and then for a brief time he served as chief of staff to Gouvion St. Cyr in the Corps of Observation of Naples. August of 1803 brought a promotion to général de brigade and then in December he was transferred to the general staff of the camps forming along the coast of France. Fulfilling administrative posts, Reille was ordered to research and analyze the military preparations of Austria, and later he reorganized the troops returning from the expedition to Saint-Domingue. In November of 1804 he was given a command under Lauriston of the troops setting sail with Villeneuve's fleet. In this capacity, Reille assisted during the fighting at Cape Finistère, but he returned to the army before the Battle of Trafalgar.

Rejoining the Grande Armée in September of 1805, Reille was named commander of Linz. After General Valhubert's death at Austerlitz, Reille was appointed commander of Valhubert's old brigade, the 2nd Brigade of Suchet's division, and the next year he took over Beker's brigade in the same division. With Suchet's division in V Corps, Reille fought at Saalfeld and Jena in October of 1806. That November he took command of a brigade of light cavalry that had previously been commanded by Savary. The next month Reille fought at Pultusk and within a few days he was rewarded with a promotion to général de division. At the start of 1807 General Reille assumed command of Gudin's division for a few days before replacing Victor as chief of staff for V Corps. That February he distinguished himself at Ostrolenka and then in May he was appointed an aide-de-camp to Napoleon. After serving at Friedland, Reille was sent as an envoy to the Siege of Stralsund, and later he was sent to Tuscany. Many rewards followed, as he was appointed a Knight of the Iron Crown, a Commander of the Order of Maximilian Joseph of Bavaria, a Knight of the Order of Saint Henry of Saxony, and a Count of the Empire.

After being sent on a mission to Madrid in April of 1808, in June Reille assumed command of a corps from Roussillon that was sent to relieve Duhesme who was besieged in Barcelona. During July and August, he took part in the Siege of Gerona, and then in November he besieged the city of Roses. A month later Reille had seized the city and he was then given command of the 1st Division of Gouvion St. Cyr's VII Corps. In March of 1809, Napoleon again appointed Reille as an aide-de-camp, and he fulfilled those duties on the campaign against Austria that year. In May he served at the Battle of Aspern-Essling . At the Battle of Wagram in July, Reille commanded the Fusiliers-Tirailleurs of the Guard. Afterwards he traveled to Antwerp to secretly watch the conduct of Marshal Bernadotte for the Emperor.

In 1810 Reille returned to Spain where he was appointed the governor of Navarre. In June of 1811 he took command of the 1st Division of the Reserve Corps of Observation, and he led this unit into battle against Mina near Sangueza. During the following months, he served under Suchet in Aragon, becoming commander of the Corps of the Ebro and governor of Aragon. Named commander-in-chief of the Army of Portugal in October of 1812, Reille took command from the interim commander General Souham the next month, and he was later awarded the Grand Cross of the Order of the Reunion. By June of 1813 Reille had withdrawn to Burgos, and he then commanded the French right at the Battle of Vitoria . Marshal Soult appointed General Reille as commander of the right wing of the army, and Reille fought at Cubiry, Irun, Pont de Berra, Bidassoa, Nivelle, and Saint-Pierre d'Irube. At one point he quit his command, refusing on principle to share command with the governor of Bayonne, until Soult agreed to give him the overall command. Reille continued to fight well into 1814, serving at Orthez , defending Tarbes, and fighting at the Battle of Toulouse .

With the restoration of the Bourbons, Reille was made a Knight of Saint Louis and he received the Grand Cross of the Legion of Honor. In September of 1814 he married his old commander Masséna's daughter, Victoire Thècle. Reille rallied to Napoleon upon Napoleon's return to France in 1815 and Napoleon named him a Peer of France. Given command of II Corps for the campaign in Belgium in June, Reille and his men repulsed the Prussians at Marchiennes. After fighting under Ney at Quatre-Bras, he took part in the Battle of Waterloo. After the loss of the battle he withdrew with the rear of the army to the Loire. After Napoleon's second abdication, he was put on non-activity by the Bourbons. In 1819 Reille resumed his military career and again became a Peer of France. He served France in various positions, eventually being appointed a Marshal of France in 1847 and a senator in 1852.