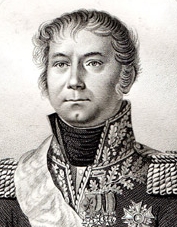 Enlisting in the army in 1786, Nicolas-Léonard Bagert Beker was assigned to the Languedoc dragoons. After the onset of the Revolution, in 1792 he was assigned to the Army of the North and he served at Courtray and then the Battle of Valmy where he was wounded by a shot to the right thigh. Beker continued to fight on and he fought at Quiévrain, Bossu, and then Jemappes . In March of 1793 he took part in the Battle of Neerwinden and afterwards he served at the defense of Pont-à-Marcq. The next month Beker was promoted to sous-lieutenant in the 6th Hussars. In September of 1793 he became an aide-de-camp to General Bonnaire and then the following month he served at the Battle of Wattignies . Next Beker followed Bonnaire to the Army of the West and while serving with that army he served at Le Mans. At the end of 1794 he was promoted to chef de bataillon and later he helped to negotiate the submission of the rebel Stofflet.

In June of 1795 Beker was promoted to chef de brigade and he then went on to become Desjardin's chief of staff in the Army of the North. In 1796 he served briefly with the Army of the Alps before returning to the Army of the North. Beker distinguished himself in combat that summer and then in 1797 he was assigned to the Army of the Sambre and Meuse. While serving there he was appointed General Ney's chief of staff before being reassigned to the staff of General Dejean in Holland. Beker helped to alleviate unrest but he did not remain there for long. In July of 1797 he was assigned as chief of staff of General Hédouville to prepare for the expedition to Saint-Domingue. The expedition set sail in February of 1798 and then arrived in March. Later that year Beker returned to France.

Beker was assigned to Sérurier's division in the Army of Italy in January of 1799. Serving on campaign that spring, he fought at the crossing of the of the Adda in April where he was taken prisoner after being wounded by grapeshot. Beker was released on parole in October and then in November he became chief of staff in the Army of England. Finally officially exchanged in June of 1800, he then went on to serve under Davout at Pozzolo in December of 1800. Next Beker received a promotion to général de brigade and he was sent to the Army of the Rhine in January of 1801. That September he was named commander of the département of Puy-de-Dôme.

After peace fell apart in the intervening years, in 1805 Beker took command of a brigade in Suchet's division. He served on the campaign against the Third Coalition and at the Battle of Austerlitz that finished the campaign. Afterwards, on December 24th he was promoted to général de division. In August of 1806 Beker took a command with the 2nd Division of Dragoons in VI Corps of the Grande Armée and he served under General Grouchy. That October as the army moved against Prussia, he and his men joined the Cavalry Reserve. Beker briefly commanded the division at times and in October he fought at Zéhdenick, Wichmannsdorf, and Anklam. In early November he was given command of the 5th Dragoon Division in the Cavalry Reserve and then in December he went on to distinguish himself at the battles of Nasielsk, Golymin , and Pultusk . In February of 1807 Beker took command of the cavalry of Marshal Masséna's V Corps and then in May he became the corps' chief of staff.

In 1808 Beker was rewarded with the Grand Cross of the Military Order of Maximilian Joseph of Bavaria and he also became the Count of Mons. He retired from the army that October but in February of 1809 Marshal Masséna requested that Beker return to the army as his chief of staff. Beker did so and he served during the Danube campaign against Austria in 1809. He fought at the Battle of Aspern-Essling in May, but his career took a downturn the next month. Beker made some ill-considered remarks about the Emperor Napoleon and he was relieved of duty and sent back to France under the pretext of bad health. Nevertheless, in 1810 he was named a Knight of the Iron Crown and in 1811 he commanded Belle-Île-en-Mer until he retired again at the end of the year.

After Napoleon's abdication and the Bourbon Restoration in 1814, Beker returned to the army and was named a Knight of Saint Louis. When Napoleon returned to power in 1815 for the Hundred Days, Beker was elected a representative of Puy-de-Dôme in the Chamber of the 100 Days and he then took part in the defense of Paris. He was selected as commander of the guard of the chamber, who then ordered him to escort the Emperor Napoleon after Napoleon's second abdication. Beker escorted Napoleon to Rochefort and then the isle of Aix where Napoleon surrendered himself to the British on the Bellerophon. Afterwards, Beker headed back to Paris but he was intercepted by the Prussians at Orléans and held as a prisoner of war. However, he was immediately released and but he was later put on non-activity and arrested by the French police. The French forced Beker to remain at Poitiers and kept him under surveillance until September of 1816. Afterwards he resumed a career in politics representing Puy-de-Dôme.