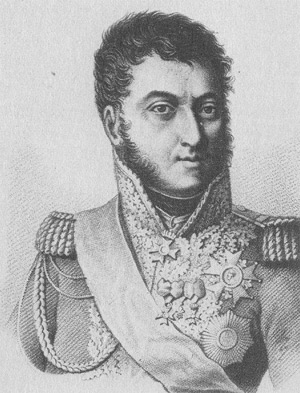 The son of a silk manufacturer, Louis-Gabriel Suchet is considered to be one of Napoleon's best marshals and he holds the distinction of being the only marshal who improved his reputation during the campaigns of the Peninsular War in Spain. Suchet supported the French Revolution and began his military career in 1791 when he joined the cavalry of the National Guard of Lyon, being commissioned as a sous-lieutenant. After serving at the siege of Lyon and then as a lieutenant colonel in the 4th Battalion of Volunteers of Ardèche, he took part in the Siege of Toulon where he took the English General O'Hara prisoner.

Suchet spent the next few years serving in the Army of Italy. After fighting at Loano as part of Laharpe's division, he went on to take part in the first Italian campaign led by General Bonaparte. During this campaign, he fought at Dego , Cossaria, Lodi , Borghetto, and Castiglione before being wounded at Cerea. Joining Masséna's division, he went on to fight at Saint-Georges, Arcola , and Rivoli .

In April of 1797, Suchet was wounded at Neumarkt but he received a promotion to chef de brigade on the battlefield for his excellent leadership. The next year he served as chief of staff to Brune in Switzerland, and then he received the honor of taking captured enemy flags to the Directory. Promoted to général de brigade, Suchet was designated for the Army of the Orient, but instead he went to Paris to defend himself from false accusations leveled against him on his conduct in Switzerland. Once cleared, he returned to the Army of Italy, where he served as chief of staff for a time.

After serving in various positions in other armies, in July of 1799 General Suchet returned to the Army of Italy when General Joubert took command. In fact, Joubert had specifically requested Suchet as his chief of staff and promoted him to général de division. Suchet fought at the Battle of Novi and was with Joubert when Joubert was killed.

At the beginning of 1800, Suchet took command of the left wing of the Army of Italy, serving under Masséna's overall command. Badly outnumbered, he nonetheless managed to give the Austrians a hard time and fell back to the Var River where he established a defensive line. After successfully defending the Var, he began to harass and push back the Austrians as they sought to adapt to Napoleon's Army of the Reserve's appearance in Italy. Hoping to join up with the First Consul's army, Suchet began to march his men to a rendezvous with the Army of the Reserve despite Masséna orders stating that they should hold their position. Next he wrote a letter to Napoleon, informing him that if he failed to arrive in time for the decisive battle it would be Masséna's fault. The Battle of Marengo was fought without Suchet, and when Masséna learned of the letter, he was furious and attempted to reduce Suchet's command and hinder his career.

When hostilities with the Austrians briefly resumed that December, Suchet seized Vola and fought at Pozzolo. The next month he was appointed Governor of Padua and six months later he became inspector general of infantry.

In 1804, despite an excellent record both in combat and administrative positions, Suchet was not made one of the Marshals of the Empire. The next year he was given a divisional command in Soult's IV Corps, but later his division became the 3rd Division of Marshal Lannes' V Corps. With this division he led admirably, fighting at Ulm, Hollabrunn, and Austerlitz before being rewarded with the Grand Eagle of the Legion of Honor. In 1806 Suchet commanded the 1st Division of V Corps and he fought well at Saalfeld, Jena, Pultusk , and Ostrolenka. In August of 1807, he took command of V Corps in Silesia.

Finally recognized for his significant contributions, in March of 1808 Suchet received three awards, being made a Knight of the Iron Crown, a Commander of the Order of Saint-Henri of Saxony, and a Count of the Empire. That November he married Honorine Anthoine, whose father was the mayor of Marseille and mother was of the Clary family and a sister-in-law to Joseph Bonaparte. This made Suchet a nephew by marriage to both Joseph Bonaparte and Marshal Bernadotte.

Before long Suchet was serving in Spain, fighting at the siege of Saragossa and then taking up a command guarding the communications between Madrid and Saragossa and covering the siege. After the city's fall, as Lannes and Duroc prepared to return to France to deal with the new Austrian menace, both personally recommended to Napoleon that Suchet be given Junot's command, III Corps. Napoleon was convinced, and in April Suchet took command of III Corps.

With III Corps, Suchet was victorious at Maria and Belchite in June of 1809, and in the same month he became Governor of Aragon. Putting his considerable talents to good use, he began to train his men into an effective fighting force and reorganize the province's administration, all the while trying to win the hearts of the people. As the province flourished under his guidance, the Spanish people began to welcome the French presence.

In 1810, Suchet won minor battles and then was ordered to take Valencia. With not enough resources to effectively accomplish that task, he was forced to withdraw in a few months. The next year he besieged and took Tarragona, and then Napoleon sent him his marshal's baton for his excellent performance. Suchet was the only marshal to receive his baton in Spain, and years later Napoleon would say that if he had two Suchets he could have held Spain. That same year Suchet seized Mont Serrat, occupied Murviedro, was victorious at Puebla de Benaguasil, seized the fort of Oropesa, and was victorious at Sagonte where he was badly wounded by a ball to the shoulder. In three years in Spain, with an army of less than 50,000 soldiers, he had occupied three provinces and taken 77,000 prisoners and 1400 guns.

Early in 1812 the Emperor further rewarded Suchet, naming him Duke of Albufera and sending one of his surgeons to attend to Suchet's shoulder. By this time Suchet had successfully taken Valencia, and he set about improving the province much as he had done in Aragon. In 1813, in recognition of his skills and successes, Suchet was appointed the commander-in-chief of the Army of Catalonia and Aragon. Unfortunately for Suchet, his forces were continuously drained to support war efforts in Germany, and he was overcome at Castalla. Nevertheless, he continued to put up a fight and and he and his men successfully lifted the English siege of Tarragona. Later forced to fall back, Suchet evacuated Valencia and was then given the honor of Colonel General of the Imperial Guard, replacing the fallen Marshal Bessières.

In 1814 Marshal Suchet was victorious at Molins del Rey before being forced to evacuate Catalonia. After falling back into France, he began to negotiate for the garrisons he left behind in Spain to be returned to France with safe passage. After Napoleon's abdication, the Bourbons made him a Peer of France, but upon Napoleon's return the next year he rejoined the Emperor. At a meeting in Paris, Suchet saw Napoleon for the first time since 1808, where Napoleon told him, "Marshal Suchet, you have grown greatly since we saw one another last."1 Due to Suchet's proven abilities as an independent commander, Napoleon appointed him as commander of the Army of the Alps, and Suchet invaded Savoy to fight off Austrian attempts to invade France.

After Napoleon's second abdication, Suchet attempted to help the now fugitive Marshal Ney, offering Ney money, a passport, and an escort despite the political risks. Unfortunately, Ney refused and allowed himself to be captured, and Suchet was struck from the list of peers of France by the returning Bourbons. Forcibly retired, he lived near Marseilles until his death in 1826. So esteemed was he, that upon learning of his death, Spanish priests in Saragossa held a mass in remembrance of him.