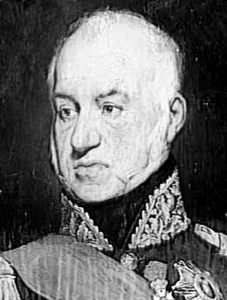 Aide-de-camp and later chief of staff to Marshal Suchet

The son of a merchant, Cyr Saint-Cyr-Nugues began his career as a commissary of war in October of 1792. He served in this position until mid 1793 and then over the following six years he served as a secretary for Generals Brune, Moreau, Joubert, and Championnet. In September of 1799 Saint-Cyr-Nugues was officially commissioned into the army as a sous-lieutenant in the 8th Light. He immediately joined the staff of the Army of Italy and then in 1800 he was promoted to lieutenant and in 1801 he was promoted to capitaine.

After the Bourbon Restoration of 1814, Saint-Cyr-Nugues was named a Knight of Saint Louis and a Commander of the Legion of Honor. He continued to be employed as a chief of staff and during the Hundred Days of 1815 when Napoleon resumed power Saint-Cyr-Nugues served as chief of staff of the Army of the Alps under Marshal Suchet. Afterwards he was put on non-activity but he resumed a successful military career in 1818.

In 1836 Saint-Cyr-Nugues was tasked with coming up with the initial list of 384 names to be engraved on the Arc de Triomphe.