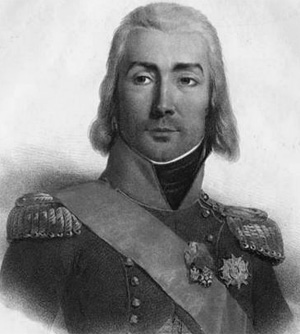 Marshal of France who commanded the cavalry of the Imperial Guard

The son of a barber surgeon, Jean-Baptiste Bessières was sent at age fourteen to the school at Cahors. While there he met and befriended Joachim Murat, but he was forced to leave the school in 1787 due to his family's financial troubles. With the arrival of the Revolution in 1789, Bessières joined the National Guard of Prayssac. In 1792 both he and his friend Murat were selected to join the Constitutional Guard of the King. After the unit was disbanded later that year, Bessières traveled south and joined the Legion of the Pyrenees to serve in the Army of the Eastern Pyrenees. In February of 1793 Bessières was promoted to sous-lieutenant, and only three months later he received a promotion to lieutenant. The next year he was promoted to capitaine in the 22nd Chasseurs à Cheval and fought at the Battle of Boulou.

After peace was signed with Spain, Bessières' unit was transferred to the Army of Italy. In 1796 when General Napoleon Bonaparte arrived to take command of the army, Bonaparte brought along Bessières' old friend Murat. During the campaign that followed, Bessières proved himself and Napoleon experienced some close calls with enemy soldiers, almost being captured. In response, Napoleon formed a company of guides to protect the commander-in-chief and placed Bessières in command of the them. That September Bessières fought at Roveredo and was promoted him to chef d'escadrons on the battlefield. He continued to serve in battle and fought at Arcola before distinguishing himself at Rivoli and La Favorite. After the conclusion of the campaign in 1797, Bessières was given the honor of taking some of the captured flags back to Paris and he then received a promotion to chef de brigade.

When in 1798 Napoleon set out for the expedition to Egypt, Bessières took part in the expedition, continuing to command the guides tasked with protecting the commander-in-chief. In 1799 he fought at the Siege of Acre and Abukir before being one of the select few chosen to return to France with Napoleon. Bessières supported Napoleon's coup d'état that established the Consulate and afterwards he was appointed deputy commander of the Consular Guard, serving under General Lannes. As part of the cavalry of the Consular Guard, he served with the Army of the Reserve in 1800 as the army crossed the Alps to fight the Austrians in Italy, eventually culminating in the hard fought Battle of Marengo. Bessières fought at Marengo but he was accused by Lannes of not supporting him, and a few weeks later Bessières was promoted to général de brigade.

During the years of peace that followed, Bessières first sought to further enhance both his own position and his friend Murat's. As the deputy commander of the Consular Guard, he was aware of the fact that Lannes had not carefully managed the Guard's budget. Bessières passed along this information to Murat, who promptly told Napoleon, and before long Lannes was removed from command of the Guard and then sent away from France as ambassador to Portugal. Meanwhile, Bessières was appointed commander of the cavalry of the Consular Guard and married Adèle Lapeyrière. In 1802 he was promoted to général de division and then in 1804 he became a Marshal of the Empire and was given command of the cavalry of the Imperial Guard. Further rewards followed when in 1805 Bessières received the Grand Eagle of the Legion of Honor and became a Commander of the Iron Crown.

When war broke out in 1805, Marshal Bessières remained in command of the cavalry of the Imperial Guard, but since Napoleon liked to keep the Guard as a reserve force, he saw little action until the end of the campaign. That December he fought at Austerlitz where a charge of his cavalry helped to ensure the victory and took a number of the enemy's artillery. The next year Bessières took part in the campaign against Prussia, distinguishing himself at Jena. In December of 1806 he was given command of the II Cavalry Corps which he led into battle and won with at Biezun.

However, in January of 1807 Bessières returned to command the cavalry of the Imperial Guard. The next month he took part in the Battle of Eylau where he led the Imperial Guard cavalry forward in a series of charges to cover the return of Murat's cavalry after Murat's grand charge. Four months later Bessières served at Friedland though the Guard saw little fighting there. More rewards followed as Bessières received the Grand Cross of Saint-Henri of Saxony and the Grand Cross of Christ of Portugal. Next he was sent as ambassador to Wurtemberg to help arrange the marriage of Napoleon's brother Jérôme to Princess Catherine of Wurtemberg, and while there he received the Gold Eagle of Wurtemberg.

In 1808 Bessières was sent to Spain to secure the road to Madrid. That July he won at Medina del Rio Seco and afterwards he entered Madrid with Joseph Bonaparte, the new King of Spain. Two months later Bessières was given command of the II Corps, but when Napoleon arrived in person in November, Bessières was instead given command of the Cavalry Reserve. He fought at Burgos and Somosierra in November, and then in December he took part in putting down the revolt at Madrid. Bessières continued to serve on the campaign, winning at Guadalajara and taking part in the pursuit of Sir John Moore's English army before being recalled to Paris.

Bessières had been recalled to Paris by Napoleon to take part in the upcoming campaign expected against the Austrians. He was placed in charge of the Cavalry Reserve in Germany, and after the Austrians attacked, Bessières went on to serve at Landshut before being beaten at Neumarkt in April. That May he served at Ebersberg and then Aspern-Essling , where he was placed temporarily under Marshal Lannes' command. As Lannes' and Masséna's troops took the brunt of the Austrian attack, Lannes repeatedly ordered Bessières to charge, only to see the cavalry idly waiting. Finally Lannes' orders were delivered with such force that Bessières charged, helping to stabilize the situation. However, that night the two marshals ran into each other, with Bessières demanding an apology and Lannes refusing, accusing Bessières of cowardice. The incident was only resolved by the intervention of Marshal Masséna, who ordered them both to separate. Lannes was mortally wounded the next day, and a week later Bessières was made the Duke of Istria by Napoleon. Bessières went on to serve at Wagram where his horse was killed underneath him and he was lightly wounded by a ball to the thigh.

Bessières was next sent to the Army of the North and then was without a command for a period of time. Opposed to Napoleon's divorce due to his Catholic beliefs, he had a falling out with Napoleon who responded by making him Governor of Strasbourg, forcing Bessières to welcome Marie Louise upon her entry into France.

In 1811 Bessières returned to active service when he was appointed commander of the Army of the North in Spain. Failing to get along with Marshal Masséna, he finally brought Masséna a token force of reinforcements and took part in the Battle of Fuentes de Onoro . Bessières' failure to bring his entire force and his lackluster performance led many of the other French commanders to blame him for the loss of the battle. A few months later he was recalled to Paris in disgrace, though so was Marshal Masséna.

For the campaign against Russia of 1812, Bessières was again placed in charge of the cavalry of the Imperial Guard. Since the Guard was again held in reserve, Bessières did little fighting, though he did influence Napoleon's thinking. At the Battle of Borodino, Bessières convinced Napoleon that it was too dangerous to risk the guard so deep in Russia, even though the other commanders felt a decisive victory was at hand if the reserve was committed. During the retreat that followed, Bessières charged the enemy at Gorodnia, and afterwards he was one of the commanders who convinced Napoleon to retrace their route out of Russia instead of taking the more southerly route. This decision, while ultimately Napoleon's, ended up leading to far less supplies and colder temperatures during the retreat, contributing to the horrors and casualties.

Having survived the retreat, Bessières took command of the Imperial Guard for the campaigns of 1813. On May 1st, Bessières joined Marshal Marmont for a meal but refused to eat anything, stating that he wasn't hungry. Marmont tried to convince him to eat, and Bessierès finally relented, uttering, "In fact, if a cannonball must take me this morning, I do not want it to take me on an empty stomach." Bessières then admitted to Marmont that he had told several people that he didn't expect to return from this campaign. When Marmont last saw Bessierès mounting his horse to go to battle, Marmont noticed the paleness of his face and remarked to a friend that he thought if a battle was fought that day, Bessières would die. Later that day, Bessières was riding in advance of the main body of troops to reconnoiter the enemy positions when he was struck by a ball in the chest, being killed instantly.1