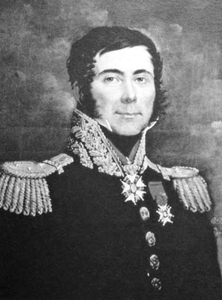 Younger brother of the marshal who served with the cavalry

Arc de Triomphe: BESSIÈRES, B. on the south pillar

A younger brother to Marshal Bessières, Bertrand Bessières joined the 17th Cavalry in August of 1791. In 1792 and 1793 he served with the Army of the Center and then the Army of the North and in November of 1793 he was commissioned as a sous-lieutenant. In 1795 Bessières joined the Army of Italy and that July he was promoted to lieutenant. He took part in General Bonaparte's Italian campaign of 1796 and in June of 1797 he was promoted to capitaine in the guides. Taking part in the expedition to Egypt, Bessières arrived with the expedition in 1798 and in August of 1799 he was promoted to chef d'escadrons on the battlefield of the fort of Abukir. The following January he received another promotion, this time to chef de brigade commanding the 11th Chasseurs à Cheval. Bessières remained with the expedition until the end when the French surrendered to the British in the summer of 1801.

After returning to France, in 1803 Bessières was sent to the Army of the Coasts of the Ocean and he served at the camp of Boulogne and the camp of Saint-Omer. In 1805 he and his men served with Margaron's brigade and in December he fought at the Battle of Austerlitz where he was wounded by a shot to the head. Only a few weeks later Bessières was promoted to général de brigade. Bessières was next sent to Italy where he commanded a brigade of cavalry.

In 1808 Bessières was sent to Spain to serve under Duhesme's command. He served in Catalonia and that June he commanded the cavalry at the combat of El Rey. Next Bessières served under different commanders and then at the end of 1809 he took command of a brigade of dragoons. In May of 1810 he joined Trelliard's division in the Army of Portugal and the following month he began serving under Kellermann in Vieille Castille. Later that year Bessières was named a Baron of the Empire and then in July of 1811 Bessières was promoted to général de division but he refused the promotion. At the end of 1811 he was recalled to France and given command of a brigade in the 1st Division of Cuirassiers.

Still commanding a brigade of cuirassiers, Bessières served against Russia on the campaign of 1812 and he fought at the Battle of Borodino where he was wounded by grapeshot to the left shoulder. In 1813 he took part in the campaign in Saxony and in October he fought at the Battle of Leipzig where he was wounded by a sabre blow to the head. Bessières was named a Commander of the Legion of Honor in November and in January of 1814 he was recovered enough to serve again but he was not actively employed. The restored Bourbons put Bessières on non-activity but also named him a Knight of Saint Louis. During the Hundred Days he commanded the département of Lot-et-Garonne and later he was put at the disposition of the Minister of War to command a cavalry depot. Afterwards he was put on non-activity.