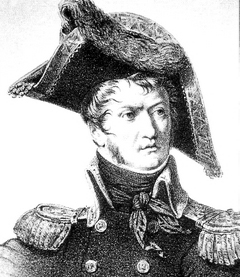 Philibert Guillaume Duhesme began his military career by joining the National Guard in 1789. Two years later he was elected a capitaine in the 2nd Battalion of Volunteers of Saône-et-Loire and then in 1792 he served with a free company that was formed. Sent to the Army of the North, in October of 1792 Duhesme was promoted to lieutenant colonel of the 4th French Battalion of Hainaut. Fighting in 1793, he served as commander at Ruremonde in February, burned the bridge on the Loo, and then was wounded by two shots at the combat of the wood of Villeneuve. That October Duhesme was promoted to général de brigade by the representatives of the the people with the Army of the North.

In early 1794 Duhesme took command of the 3rd Brigade of Fromentin's division and fought with them at Guise in April. The next month he took command of Desjardin's advance guard briefly and was wounded by a ball during the fight at the woods of Bonne-Espérance before he returned to Fromentin's division. Duhesme continued to fight into May and then he joined Kléber's division in June, fighting at Charleroi and Marchiennes and then distinguishing himself at Fleurus . Next he passed to the Army of the Sambre and Meuse with the reorganization of the army and he served at the siege of Maestricht. In November of 1794 Duhesme received a promotion to général de division and the next month he took command of the 5th Division.

In 1795 General Duhesme was sent to the Army of the Coasts of Brest with a large detachment of soldiers and at the end of the year he returned to the Army of the Rhine and Moselle. Immediately seeing action, he was given command of the 10th Division and he fought at Obermedlingen and the retreat from Mannheim. Duhesme continued to lead a division throughout much of 1796, and in July he seized Wolfach and Scharmberg. The next month he fought at Neresheim but was then suspended from his command due to unfounded accusations of being a coward and leaving the battlefield.

Duhesme was reintegrated in the army and in April of 1797 he took command of the 3rd Division under General Desaix. That month he fought at the crossing of the Rhine at Diersheim near Kehl where his right hand was wounded by a ball. When the drummer was killed, Duhesme picked up the drum and beat the charge with the pommel of his sword, inspiring his men to continue forward.

In 1798 Duhesme took some of the flags captured by the Army of the Rhine to Paris to present to the Directory and afterwards he was sent to Italy to serve in the Army of Rome. Serving under Championnet there, he commanded the left wing of the army and laid siege to and took Civita del Tronto and then Pescara in December of 1798. The next month Duhesme was wounded by two shots at the retreat of Sulmona but he then seized Isernia and distinguished himself at the action of Naples. He next took command of the province of Pouille and seized San Severo, but in March he was disgraced for plundering at the same time as Championnet and arrested. Duhesme was acquitted and he returned to duty in June of 1799 in the Army of the Greater Alps. That September he served in the Army of the Alps under Championnet again, and he went on to seize Suze and Rivoli before winning at Pignerol in October. Duhesme next seized Savigliano and served at Genoa before obtaining a leave to return home for the winter.

In April of 1800 Duhesme was given a new command in the Army of the Reserve, taking command of a corps of two divisions. During the crossing of the Saint-Bernard Pass, many of his troops were forced to help with the difficult task of moving artillery through the pass. Half of a battalion mutinied and exclaimed that they would rather die in the cold than labor like animals. Duhesme arrived on the scene and ordered other soldiers to load their muskets, threatening to shoot those would go no further. His orders had the intended effect and got the troops moving again.1 That May he crossed the Ticino River at Buffalora and then in June he drove the Austrians out of Melegnano and seized Lodi, Crema, and Cremona. Continuing the campaign, Duhesme won at Castelleone and blockaded Pizzighettone, then crossed the Adda before finally returning to Cremona. Once the Austrians were defeated, he served briefly in the Army of Italy before being sent to the Army of Holland where he served at Burg Eberach, Bamberg, Forchheim, and Nuremberg.

During the years of peace that followed, Duhesme was named commander of the 19th military division at Lyon. In 1804 he was recognized as a Grand Officer of the Legion of Honor and when war broke out in 1805 he was sent to the Army of Italy to command the 4th Division. In Italy that October Duhesme served at the bridge of Verona, San-Michele, and the Battle of Caldiero . At the end of the year he was ordered to occupy Istria, and then in 1806 he took command of the III Corps of the Army of Naples.

September of 1807 saw Duhesme returning to France and in 1808 he took command of a division serving in the Eastern Pyrenees. Sent into Spain, he entered Catalonia, occupied Barcelona, won at the Llobrégat, and then failed to take Gerona. That September Duhesme was named governor of Barcelona but he was then blockaded by enemy forces until Gouvion St. Cyr came to his rescue to lift the siege. He continued to serve as governor of Barcelona until February of 1810 when he was relieved of duty by Marshal Augereau, who accused him of abusing his position and powers to make himself rich. On Augereau's order, Duhesme left Barcelona and returned to France and after arriving in Paris he was ordered to leave Paris within 24 hours. Duhesme then retired to Rouen and later Bourgneuf.

Given French losses in 1812 and 1813, General Duhesme was recalled to service in late 1813 and named commander of Kehl. That Christmas he took command of the 3rd Division of Marshal Victor's II Corps and he went on to serve in the defense of France of 1814. In January Duhesme and his men were driven out of Saint-Dié, but later that month they served at Saint-Dizier and Brienne. The next month he served at La Rothière and Montereau and he was then created a Count of the Empire.

After Napoleon's abdication, Duhesme was made inspector general of infantry and a Knight of Saint Louis by the restored Bourbons. Nevertheless, when Napoleon returned to power in 1815 Duhesme rallied to him and was named a Peer of France. Napoleon gave Duhesme command of a division of the Young Guard, and Duhesme led them into action at Ligny that June. Two days later he led his men throughout the fighting at Waterloo, and around five in the evening he was near Plancenoit when he was hit in the right side of the head. Duhesme was taken prisoner as the French army retreated, and he was transported to an inn to be held alongside General Mouton. He died a few days later.