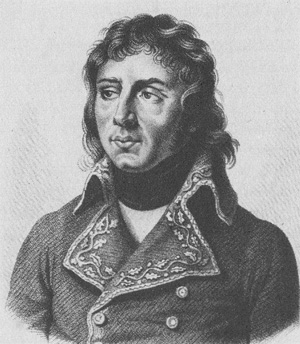 The Just Sultan who died saving the French army at Marengo

Born to a noble but poor family, Louis-Charles-Antoine Desaix is considered to be one of the best generals of the Revolutionary Wars. Known for his politeness and humanity, he was often shy and reserved except in battle, and he was known for wearing a simple, ragged blue cloak.1 Over the course of his career he became good friends with Generals Davout and Reynier and Dr. Larrey.

Desaix began his military career at the young age of eight when he entered a royal military school. A sous-lieutenant by the time of the Revolution, he refused to follow his older brother's advice and his family's emigration from France in 1791. By the end of the year Desaix was a lieutenant and working with the supply staff, but the next year would be full of excitement for the talented young officer. In May of 1792 he joined an infantry regiment in the Army of the Rhine and received a promotion to capitaine. The next month he became an aide-de-camp to General Victor de Broglie. On the 12th of August, Desaix received his baptism of fire while he was reconnoitering in advance of the army at Landau. Captured when the French were forced to fall back, Desaix was only held for a short time by the enemy. However, once he returned to the French forces he was arrested and imprisoned at Epinal. Desaix's imprisonment was short, for he was released by the end of October and he then joined the staff of the Army of the Rhine.

1793 continued to be another year of action for Desaix. Initially charged with the defense of Worms in January, in May he protected Custine's retreat at Rulzheim and then was promoted to chef de bataillon. That August Desaix was wounded when a ball passed through both his cheeks at Lauterbourg, but his bravery did not go unnoticed as he was promoted to général de brigade on the field of battle by the representatives of the people with the army. The next month he joined Dubois' division and drove the Austrians out of the forest of Bienwald, but then he was forced to retreat against Austrian advances. On October 20th Desaix was again promoted, this time to général de division, having only been a général de brigade for two months. Unfortunately, due to his parents having emigrated, orders were given for his suspension from command, but he remained in his post, his abilities and conduct protecting him.

For a month and a half in the spring of 1796, Desaix was interim commander of the Army of the Rhine and Moselle until handing the command over to General Moreau and then taking command of the center. That June, he directed the attack on the Rehebach and repulsed the enemy cavalry on the plains of Muterstadt, then on the 24th he crossed the Rhine at one in the morning and had seized the fortress of Kehl by noon. Four days later, Desaix won at Renchen, and then in the coming weeks he fought at Rastadt and Ettlingen. Continuing his success, Desaix drove the Austrians back near Aalen in August and then took part in the Battle of Neresheim . In September he was victorious at Geisenfeld, then in October he won at Biberach and took part in the fighting at Emmendingen before being ordered to with defend Kehl.

In 1797 Desaix again became interim commander of the Army of the Rhine and Moselle during Moreau's absence, and then in April he resumed command of the center. While crossing the Rhine at Diersheim he charged at the head of his troops and was hit by a ball in the thigh, taking him out of the action. Transported to Strasbourg to recover, by the time Desaix was well in July hostilities were suspended and so he traveled to Italy to meet General Bonaparte. After touring Italy, he traveled to Germany and then Rennes and Brest before returning to Rome to prepare to embark on the expedition to Egypt.

Leaving Italy on the frigate La Courageuse on May 26, 1798, Desaix's ship sighted Malta on the 8th of June, joined the fleet from Toulon, and then Desaix led the assault on the fort at Malta. Once the ships arrived off the coast of Egypt, he formed the advance guard to protect the troops disembarking, and then he had a busy month, winning at Rahmanieh and distinguishing himself at Chebreiss and the Battle of the Pyramids . Named commander of the province of Cairo, Desaix set out to reorganize and pacify all of Upper Egypt. Traveling up the Nile, he defeated the Mamelukes at Behneceh and then Murad Bey at Sediman. Unexpectedly Desaix was struck by momentary blindness and he returned to Cairo until the condition healed. Resuming his efforts in 1799, by April he had forced Murad Bey out of the country and pacified all of Upper Egypt. In addition to his military victories, his fair administration and improvement of the quality of life for the people of Egypt caused them to nickname him "the Just Sultan". Napoleon also admired his accomplishments and sent him a sabre of honor with the words "Conquest of Upper Egypt" engraved on it.

When Napoleon departed Egypt, he invited Desaix to return with him, but Desaix did not receive the news before Napoleon had already left. As the French trapped in Egypt negotiated with the English, Desaix discussed with Sir Sidney Smith the conditions for the French evacuation of Egypt and regretfully signed the convention of El Arisch in January of 1800. With the terms of evacuation completed, Desaix requested to return to France, which General Kléber granted, and so in March he left Egypt for France on a merchant ship. Unfortunately for Desaix, an English frigate overtook the ship and took him prisoner despite the terms of the treaty granting French soldiers in Egypt safe passage to return to France. He was transported to Livorno and held there until he was released at the end of April, and he finally arrived back in France at Toulon on the 5th of May.

Napoleon learned of Desaix's return and immediately requested that Desaix join him with the Army of the Reserve. Ignoring quarantine to fulfill the First Consul's request, Desaix hurried over the Great Saint Bernard Pass to Italy to join Napoleon. While crossing the pass, bandits attacked his entourage, killing one of his companions and stealing his baggage, but he was not deterred.2 Upon his arrival on the 11th of June, Napoleon placed him in charge of a corps consisting of Boudet's and Monnier's divisions. When Desaix went to survey Austrian positions, Austrian sentries opened fire and Desaix told those he was with, "The Austrian balls have known me in the past, I fear they no longer recognize me."3 Napoleon misinterpreted the Austrian army's intentions, and on the 13th he dispatched Desaix to the south to block any Austrian moves in that direction.

On the morning of the 14th, Desaix and his men were struggling to cross a flooded river when they heard the sound of thunder in the distance. Realizing it was artillery, Desaix immediately ordered his men to head back the way they came, and he himself galloped off towards Marengo. Arriving at Marengo in the afternoon and seeing the French falling back all along the front, he quickly rode for the First Consul and entourage. "What do you think?" Napoleon asked him as he arrived. Desaix, covered in mud, pulled out his pocket watch and looked at the time. "This battle is lost," he told Napoleon, "But there is still time to win another."4 Heartened by his attitude and the arrival of his troops a short time later, the French position improved. As Desaix led his men in the main counterattack against the Austrians, he was shot through the heart and instantly killed.

Desaix's death at Marengo occurred on the same day as Kléber's assassination in Egypt. After the Battle of Marengo was over, Desaix's aide Savary found and recovered his body, which was then transported to the monastery at the top of the Great Saint Bernard Pass where he was buried. Both of Desaix's aides, Savary and Rapp, became Napoleon's aides when Napoleon learned of Desaix's death.