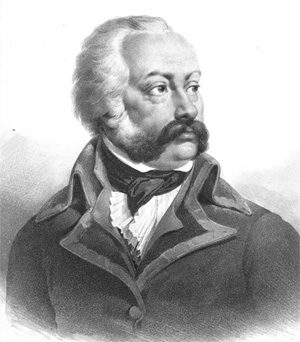 A career soldier in the service of France, Adam-Philippe Custine de Sarreck's first major campaign was during the Seven Years War as a lieutenant. During that war he was promoted to capitaine and afterwards he was made a Knight of Saint Louis. His next major tour came in 1780 when he served with the French assisting the Americans in the American Revolutionary War. Promoted to mestre de camp that year, the following year he distinguished himself at Yorktown and then he was promoted to maréchal de camp. Returning to France in 1782, Custine was named the Governor of Toulon.

When the Estates General was called in 1789, Custine was selected to attend as a deputy of the nobility of Metz. Two years later Custine was back with the army and promoted to lieutenant general. Sent to Alsace, Custine defended Landau and later he took Spire, Worms, Mainz, and Francfort-sur-le-Mein. On October 30th, 1792, he was named commander-in-chief of the Armies of the Moselle, Rhine, and Vosges. Custine was beaten at Bingen in March of 1793 and then in May he was sent to the Army of the North. By this time the revolutionary leaders in Paris were questioning his abilities and he was called to Paris in July of 1793 to justify his actions. Not long after his return to Paris, the fortress of Mainz fell to the Coalition forces and Custine was blamed for abandoning the city. Custine was accused and then condemned to die, being executed by guillotine on August 28th.