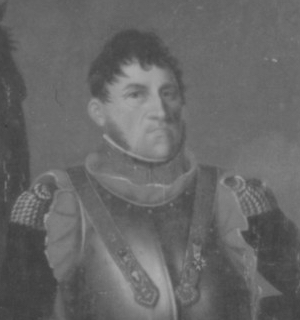 Cavalry officer who served at Eylau, Aspern-Essling, Wagram, the Berezina, and Waterloo

Brother of the diplomat Dubois de Thainville, Jacques Charles Dubois entered the army in the Colonel Général dragoon regiment in 1781. In March of 1789 he obtained a leave to quit the army and he rejoined the army almost three years later as a sous-lieutenant in the 16th Dragoons in January of 1792. Sent to Saint-Domingue that summer, Dubois was promoted to lieutenant in December and then in 1793 he was promoted to capitaine. At the end of 1794 he returned to France where he was assigned to the Army of the West. In 1796 Dubois joined the Army of the Sambre and Meuse and that September he was wounded while serving during the retreat. In 1797 he joined the Army of Mainz and then in 1798 he served with the Army of Italy, the Army of Rome, and then the Army of Naples under General Championnet. That December Dubois distinguished himself at Otricoli. In 1799 he returned to the Army of Italy and he served at Storla and at the Battle of Novi . The following year Dubois began serving with the troops in Holland.

In 1801 Dubois was assigned to the 1st military division and then in 1803 he was promoted to chef d'escadrons in the 3rd Dragoons. That same year he was employed in the second reserve of the Army of the Coasts of the Ocean and then in 1805 he officially joined the Cavalry Reserve of the Grande Armée. In August of 1805 as the army began to move out Dubois was attached to the 1st Brigade of Baraguey d'Hilliers' dragoon division on foot. After serving on the campaign that fall, in September of 1806 he was appointed major in the 5th Dragoons. Next taking part in the War of the Fourth Coalition, Dubois served in Prussia and in February of 1807 he distinguished himself at the combat of Deppen and then at the Battle of Eylau. After the conclusion of the campaign in June he was promoted to colonel of the 7th Cuirassiers.

In 1808 Dubois was named a Baron of the Empire and in 1809 he joined Fouler's brigade in Espagne's division. After Austria attacked France's ally Bavaria, Dubois took part in the Danube campaign that spring and he fought at the Battle of Aspern-Essling in May. Espagne was killed and Fouler was captured at Aspern-Essling so Dubois and his men began serving under the new commanders, Generals Arrighi and Bordessoulle, and Dubois took part in the Battle of Wagram . In 1812 Dubois took part in the campaign against Russia and during the retreat that followed he distinguished himself at the Battle of the Berezina. He was promoted to général de brigade in February of 1813 and then in April he was placed in command of the cavalry depot of Brunswick.

After Napoleon's abdication and the Bourbon Restoration, Dubois was put on non-activity and then later named a Knight of Saint Louis. During the Hundred Days when Napoleon resumed power Dubois was given command of the 1st Brigade of Watier's 13th Division in the IV Cavalry Corps, consisting of cuirassiers. Dubois served at the Battle of Waterloo where he was wounded by a sabre blow during the retreat. He retired from the army in October.